In the U.S. and abroad, governments, regulators and third-party activist groups are considering policies and actions that could have implications for the sealing device industry. The passing of the Clean Air Act in the early 1990s was a watershed moment for the industry. The emerging challenges associated with climate change present an opportunity for the Fluid Sealing Association (FSA) to engage all interested stakeholders about the sealing industry and the role these technologies play in managing leaks and emissions.

At its recent annual meeting, the FSA renewed its commitment to engage, educate and advocate for the interests of sealing device manufacturers as the debate over environmental policy continues. Because sealing devices—including mechanical seals, compression packing, expansion joints for ducting and piping systems, and gaskets—are used to contain processes and prevent harmful, toxic or dangerous products from escaping into the environment, they play a pivotal role in every industrial facility that manages emissions. Sealing devices, however, are often overlooked, and their function is not well-known or understood. An active and engaged FSA, working with end users, can help educate key government stakeholders about the essential role sealing devices play in maintaining a clean environment while ensuring reliability, industrial growth and profitability.

In the U.S., the Environmental Protection Agency (EPA) is planning to take steps to implement President Obama’s Climate Action Plan. With the release of the 2014 document by the Obama administration and its plan to cut pollution that causes climate change, the administration has outlined how technology and best practices to recover methane and cut pollution are already widely available and used in key sectors. The spring 2014 release of five technical white papers, one focused on leaks and another focused on compressors, underscores the opportunity to educate end users about how fluid sealing technologies can recover emissions through efficient mitigation techniques. 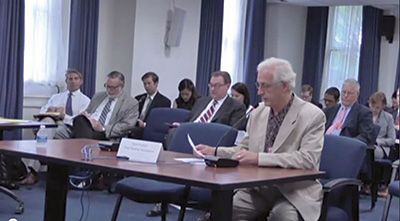 FSA technical director testifies in front of the U.S. Trade Representative and five other government agencies. (Courtesy of FSA)

As the EPA is reviewing strategies to reduce methane emissions—specifically from the oil and gas industry—the FSA Government Affairs Working Group is engaging the administration, the EPA, the Department of Energy and non-government organizations to educate them about the role of sealing devices in abating emissions, reducing energy use and improving efficiency of the oil and gas sector.

In January 2014, the World Trade Organization (WTO) began negotiations to classify and promote the trade of environmentally beneficial goods. The WTO is working to eliminate tariffs on items with an “environmental goods” classification.The FSA is advocating that sealing devices be added to the list of environmental goods for their role in protecting the environment. This could present an opportunity for FSA members to expand the global market for their technologies through direct engagement and advocacy. In June 2014, Henri Azibert, FSA technical director, testified before a hearing hosted by the office of the United States Trade Representative.

“[The sealing technologies provided by FSA members] are extensively used in the oil and gas industry as well as all types of industrial processes that have a requirement to contain emission of volatile organic compounds or volatile hazardous air pollutants,” Azibert said. “Their specific function is to contain industrial processes and prevent leakage to the environment. The proper use and selection of the right type of sealing products can be significant contributors to a cleaner environment.”

The FSA is coordinating closely with the European Sealing Association during these negotiations, ensuring that the European Commission is invested in the success of sealing devices before a final list is agreed upon in spring 2015. Recognition of sealing devices as environmental goods will increase the awareness of the cost and negative impact of inefficient sealing systems. Increased awareness of how best to implement these low-emission systems will reduce end users’ carbon footprint and methane emissions.

Tariffs applied to U.S. exporters of sealing devices totaled $76 million for 2013, and this cost creates a barrier to the use of sealing systems. If tariffs are removed, projections show that the U.S. sealing device industry could realize 2 to 5 percent growth in exports. The FSA will continue to have significant opportunities to engage, educate and advocate on critical policy issues that can facilitate the optimal use of sealing devices. This advocacy should enable businesses to expand and help FSA better support end users.

Because the debate over climate change is complex and even heated at times, the FSA is well-positioned to actively engage stakeholders, remain a technical resource and advocate for the interests of the sealing device industry.

Send your suggestions for article topics as well as questions on sealing issues to sealingsensequestions@fluidsealing.com.