How do you determine the primary cause(s) of mechanical seal failure?
by Fluid Sealing Association
09/01/2004

Q. How do you determine the primary cause(s) of mechanical seal failure?

A. A systematic method, based on failure analysis, to investigate and correct the performance of mechanical seals provides the means to attain longer service lives and reduced life cycle costs.

Failures occur when a product ceases to perform its intended purposes—either prematurely or after satisfactory life cycles have passed. Since downtime usually is even more expensive than maintenance costs, the efforts we expend on failure analysis frequently pay for themselves many times over when corrective actions are taken. To understand the primary causes of failure, we must first understand the basic features of a mechanical seal system.

The function of every mechanical seal is to prevent the escape of a fluid past the clearance between a rotating shaft and the passageway through the wall of a housing or pressurized vessel. End face mechanical seals can incorporate many designs and configurations to accomplish this. As shown in the accompanying figure, typical mechanical seals have three basic components: (1) primary seal elements, (2) secondary seals; and (3) hardware for attaching, positioning, and maintaining face-to-face contact.

The primary seal is formed by two materials with lapped faces that create a very restrictive leakage path from rubbing contact between them. In all such seals, one face is held stationary, and the other is fixed to and rotates with the shaft.

The phrase “restrictive leakage path” is used because all mechanical seals leak – through these faces, even though one does not see leakage from most of them or any leakage is controlled to environmentally acceptable levels via ancillary systems. The leakage rates, however, are normally small; and environmentally acceptable, non-hazardous or nontoxic fluids may be allowed to evaporate or dissipate to the atmosphere in a short time period. For controlled, hazardous and toxic fluids, other means are required for containment. 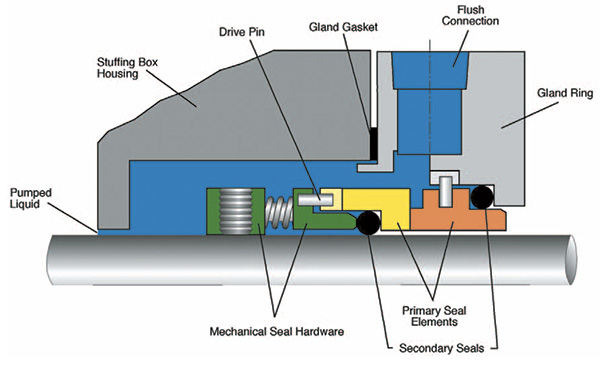 Secondary seals made from various fluoroelastomers usually close leakage paths around the stationary face and the rotating face. For pusher-type seals, the secondary seal must move forward along the shaft to compensate for wear and vibration at the seal faces. For non-pusher-types, such as metal bellows units, vibration and wear are taken up internally in the bellows, and here the secondary seals are truly static. The mechanical hardware supplied with and integral to the seal is used to:

No matter how complicated a design might appear the first step in seal failure analysis is to identify which of the basic seal components show damage that might indicate the cause of leakage. A mechanical seal has failed when leakage becomes excessive. Common causes include:

The objective of failure analysis, naturally, is to learn from failures. We should carefully look at worn and damaged seal parts, the condition of the equipment, and the operating conditions, to establish a list of ways to improve seal life. For worn parts, this consists of identifying damage as chemical, mechanical, or thermal and taking steps to ensure it does not recur. Skills in mechanical seal failure analysis can be improved by looking at the basic forms of damage that occur to determine:

Sealing Sense is produced by the Fluid Sealing Association (FSA) as part of our commitment to industry-consensus technical education for pump users, contractors, distributors and manufacturers. As a source of technical information on sealing systems and devices, and in cooperation with the European Sealing Association (ESA), the FSA also supports development of harmonized standards in all areas of fluid sealing technology. The education is provided in the public interest to enable a balanced assessment of the most effective solutions to pump technology issues on rational Total Life Cycle Cost principles.

The Mechanical Seal Division of the FSA is one of six divisions with a specific product technology focus. As part of its mission, it develops fundamental technology publications such as the Mechanical Seal Handbook, to complement more detailed manufacturer’s documents produced by its member companies.

For additional information on FSA and the publications and services it offers to industry, log on to www.fluidsealing.com