Released in May 2014, the fourth edition of the American Petroleum Institute (API) Standard 682 provides guidance for monitoring the sealing systems used on pumps deployed in the petroleum, natural gas, chemical and related industries. Pertaining to pump operations and maintenance, some important aspects of API Standard 682 describe changes in instrumentation used to monitor pump auxiliary seal flush systems. The new edition indicates a preference for continuous measurements using pressure and level transmitters instead of the prior practice of using pressure and level switches.

Because of the costs associated with monitoring pumps using wired instruments, often only a small percentage of a typical process facility's pumps are monitored online. Many pumps are inspected only periodically by operations or maintenance personnel on field rounds. As a result, the majority of process pumps operate without continuous monitoring, increasing the risk of unanticipated failures, leaks, fires and other potentially dangerous situations.

In addition, most pump auxiliary seal flush systems have limited online measurements. Their traditional inspection approach involves manual monthly checks in the field and the use of switches to detect low level, high pressure or high temperature.

A traditional mechanical switch is not as effective as a transmitter because it can only provide an on/off signal. Unlike a transmitter, a switch cannot indicate distance from an alarm or set-point, so it cannot be used to predict problems. Most switches do not have onboard diagnostics, making it difficult to know if the switch is operating properly.

Many facilities have limited existing wiring for additional instrumentation, and often implementing a wired monitoring solution is not feasible, especially considering the safety requirements of installing the necessary wiring in an operating process plant. Wireless sensors provide an economically viable option that can be easy and relatively inexpensive to implement.

API Standard 682 defines piping plans and various types of sensors and controls for pump auxiliary seal flush systems. Although the standard defines several plans, the most significant in this context are Plans 52 and 53 A, B and C.

These cover dual mechanical seals with a flush fluid for lubrication and cooling. In all plans, heat is removed by cooling water coils in the reservoir or by circulating the flush oil through finned tubes.

If an existing facility is upgrading its mechanical seals from single to dual, then it may select either Plan 52 (unpressurized) or one of the three pressurized plans—53 A, B or C—for the auxiliary seal flush system. All four plans need instrumentation to monitor the level, pressure or temperature in the seal flush reservoirs.

For existing process units, there may be insufficient spare wires in the vicinity to deliver these measurements to a control room or other location, making wireless sensors an attractive option.

The objective of the API Standard 682 committee for the fourth edition was to make recommendations for continuous seal system operation for at least three years (25,000 operating hours). Other objectives were increased availability and simplified maintenance.

With indicating transmitters, wired instruments or wireless sensors, field personnel can visually monitor operating parameters at the equipment, and operators can view the same data in a control room. Data from transmitters can be analyzed to predict problems before they occur—for example, watching a trend as a measured value approaching an alarm point. Predicting failures allows maintenance to happen prior to a breakdown.

For the unpressurized system defined in Plan 52 (see Figure 1), API 682 recommends using pressure and level transmitters. The level transmitter provides a low-level alarm in all cases, and a high-level alarm is specified for cases where the pumped fluid is still in the liquid phase at atmospheric pressure (non-vaporizing). 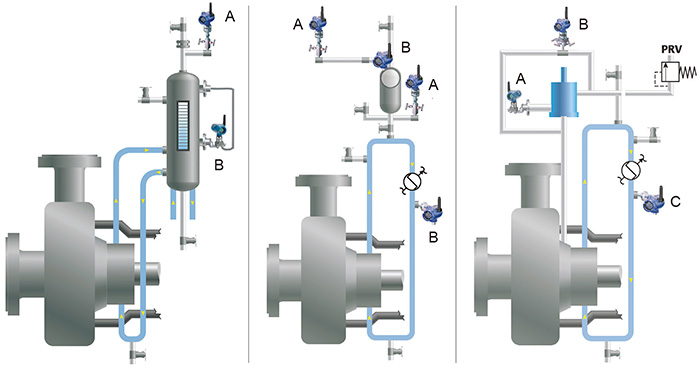 Plan 52 is designed to keep the buffer liquid at a pressure less than the seal chamber pressure, which is typically intended to be less than 40 pounds per square inch gauge (psig), or 276 kilopascal (kPa). The pressure signal has a high-level alarm that indicates when the leakage rate of the vaporizing pumped fluid into the reservoir increases to the point where the pressure accumulates to above the high-pressure alert setting. Vaporizing fluid will increase the reservoir pressure as more flow passes through the restriction orifice to the flare or vapor-collection system.

The reservoir pressure must exceed the seal chamber pressure by a minimum of 20 pounds per square inch (psi), or 138 kPa. If the reservoir pressure is less than the seal chamber, the normal leakage flow direction across the inner seal will be reversed. The barrier liquid may become contaminated with the process liquid, possibly creating a hazardous barrier liquid and increasing the possibility of seal failure.

A low-level alarm indicates that it is time to refill the reservoir or that a leak has occurred in the outboard seal on the atmospheric side. For Plan 53 A, the pressure should be sufficiently high, while low pressure will be an alarm condition, indicating loss of the external source of pressurization gas.

Plan 53 B defines systems with an accumulator bladder that maintains pressure (see Figure 2). The reservoir is completely filled with barrier liquid, so no level measurement is required.

Leakage past the inner and outer seals results in a decrease in flush system pressure. This requires the barrier system to be pressurized to a higher initial pressure and allowed to slowly depressurize to the minimum allowable system pressure. The system is then refilled to restore the maximum working barrier liquid volume.

On hot days, the accumulator pressure may still be above the low-level alarm setting, even when the inventory of flush fluid is depleted. As a result, the fourth edition specifies a low-pressure alarm set-point that is a function of the current ambient temperature and of the pressure and temperature the last time the bladder was charged with nitrogen.

Plan 53 C defines systems in which pressure in the reservoir is supplied by a spring-loaded piston (see Figure 3). Level measurement in the piston accumulator may be challenging for both differential pressure and guided wave radar level sensors. In this case, level switches may be the best option, but further examination is often necessary to determine the best option.

For many installations, the key to an economical pump seal instrumentation scheme is wireless sensors. Many pumps are located in hazardous areas, difficult-to-reach places or in locations such as wellheads and offshore platforms where electrical power is limited. In many of these cases, using wired transmitters may be too expensive because of the cost to install and maintain the wiring infrastructure.

The installation of wireless sensors can be straightforward. The sensor has to be plumbed into the process to measure level, pressure or temperature—no wiring is required.

Once the pump seal flush system is equipped with wireless sensors and the accompanying wireless infrastructure, it is relatively easy to add other sensors to a pumping system to measure cavitation, flow, vibration and other parameters such as temperature, strainer plugging, seal fluid level and hydrocarbon leaking (see Figure 4) to provide a comprehensive pump health monitoring system.

When coupled with the appropriate control and monitoring system software, this type of pump monitoring system will comply with API Standard 682 and provide other benefits including increased uptime, lower maintenance costs and optimized operations.

Brian Atkinson is a senior application development consultant for Emerson Process Management. He is responsible for driving integrated product and technology roadmaps and leading new product introduction efforts. He has more than 15 years of experience in automation and control. He has a bachelor's degree in chemical engineering from the University of Delaware.