For those of you old enough to remember Lawrence Welk, you’ll notice that the title of this brief column is the final quote from his show’s closing song. I am still a loyal fan of his reruns today.

November marked the publication of my 99th column in Pumps & Systems. This month’s column—the 100th—will be my last for “Pump Ed 101.” However, I do plan to contribute several more guest columns on an occasional basis. The reason I am scaling back is that I turn 70 soon, and I decided that it is time to think about retirement and spending more time with family and friends.

Writing for Pumps & Systems for the last eight years has been a wonderful journey. I have learned a lot, and hopefully, so have the readers. My intent was to provide technical information in an understandable way. When writing about a particular topic, I not only used my knowledge but also did research to make sure that the information I provided was as accurate as possible. It took at least two and sometimes three weekends to produce a finished draft. 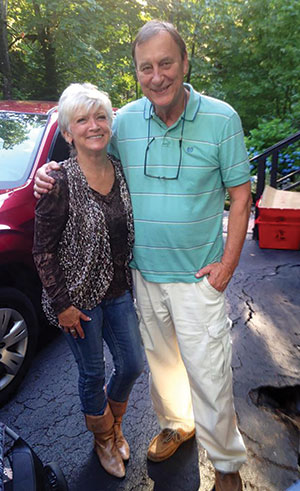 Joe Evans and his wife, Lynn, on vacation in Kauai, Hawaii (Image courtesy of the author)

I appreciate the continuous feedback from our readers who provide compliments, corrections and other points of view. I would especially like to thank readers Lee Ruiz and Robert Perez for their many constructive comments and suggestions over the years. Pumps & Systems columnists, including Lev Nelik and Terry Henshaw, have also been extremely helpful.

Finally, I would like to thank the previous and current staff at Pumps & Systems for allowing me to contribute to their magazine. Michelle, Lori and their team of editors have been great to work with and publish an excellent magazine. Although I was offered an opportunity to write for other publications, I chose Pumps & Systems because of its focus on content. Advertising is key to the success of any magazine, but it is the readership that attracts those advertisers. And it is content that attracts the readership.

Pumps & Systems provides content that benefits engineers, operators and maintenance personnel throughout the pumping industry. No other publication can match the amount of information that is available in every issue. Please keep up the great work.

To all of our Pumps & Systems readers, staff and authors, I extend to you “good wishes, good health and good night.”

In his 100 columns, Joe has written about the fundamentals of improving pumping systems by engaging readers with wit and personal humor. Eight years later, what we remember most about “Pump Ed 101” is not just the expert guidance but also the ways in which Joe has imbued our industry with a sense of fun and life. Here are our picks of what is essentially Joe—a look between the lines of the columns that have helped end users for nearly a decade.

“Back in the early ‘70s, when I was in grad school, our government pledged to convert the U.S. measurement system to the metric system. … That was almost 37 years ago, and we still have most of those feet! I guess that I could say that we are still ‘inching’ into the metric system.”

“The rise of bebop in the 1940s and ‘50s had a major effect on the style and sound of both jazz and rock and roll. As a drummer with a jazz quartet during my college years, the bebop artists of the ‘50s and ‘60s were my idols. ... I redefined the term BEBOP (best efficiency/best operating point) to illustrate the importance of both, and I use it in all of my pump seminars. I do not expect to go down in the annals of pump history for this not-so-notable achievement, nor do I expect to be nominated for the Nobel Peace Prize, but I do hope it will cause people to consider BEP from a wider perspective.”

“Two schools of thought exist with regard to centrifugal force. The one I support views it as a false force. The other side believes that it is real. That is the side that also believes Elvis is alive and well, but do not let that influence your opinion.”

“Successful motor operation is ‘a tale of two currents.’ ... Charles Dickens might have summed it up this way: ‘It was the best of currents; it was the worst of currents.’”

Joe Evans is responsible for customer and employee education at PumpTech Inc., a pump and packaged system manufacturer and distributor with branches throughout the Pacific Northwest. He may be reached via his website PumpEd101.com.