Recruiting Young Workers Series
by Pumps & Systems
Hydraulic Institute
08/16/2017
Editor's Note: The difficulty of recruiting young workers to the pumps industry is an issue echoed in both our reader surveys and discussions with industry leaders. Despite these concerns, there are many up-and-coming employees who are committed to making a career in the industry. Jesse Salas’s story is the second installment of a five-part Pumps & Systems series highlighting some of the bright young people taking on pumps careers in 2017. Read other parts of this series and our "Pump Industry Employment Analysis" here. 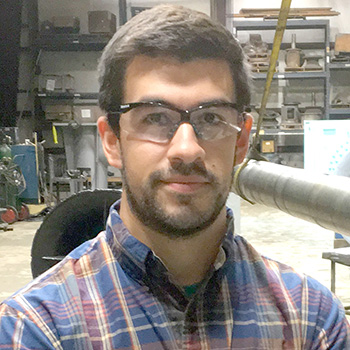 For Jesse Salas, taking a job in the pump industry was an opportunity for creativity. Having spent his collegiate years researching railroad bearings, Salas knew that engineering groundbreaking solutions for a centuries-old industry would require out-of-the-box thinking.

“The constant progression of technology has enabled us to come up with more innovative (ways) to solve problems,” Salas says. “It’s interesting to be in an industry that is pretty well-established and to be able to have a new take on it.”

After earning his bachelor’s degree in mechanical engineering in 2013 at the University of Texas—Pan American in Edinburg, Salas ventured 360 miles to College Station where he studied under Texas A&M’s turbomachinery laboratory director Dr. Dara W. Childs. “We learned that a lot of these traditional fixes are more like band aids. Technology has allowed us to develop new and innovative solutions to solve these age-old problems,” Salas says.

His favorite part of the pump industry so far is seeing interesting failure modes. Each week he is faced with a new problem—whether a failed component or a new manufacturing process—and he enjoys the opportunity to expand his engineering knowledge and expertise.

“For undecided engineering majors, I would point out that pump engineers do not just work in oil and gas; there are numerous industries that rely on well-designed pumps and pumping systems to keep them humming,” Salas says. “The technology that goes into their design and the design of their support systems is always improving, and there will always be the need for engineers to push things forward and create a better pumping system. Some of the pumps that are currently in service around the world have the same overall design that was used 10 or 20 years ago when we didn’t have the capabilities to do the sorts of things we can do now. Those pumps will need good, competent engineers to update and improve their performance with the numerous tools available to us.”

Salas began his undergraduate studies as an accounting major, but because of encouragement from a high school teacher who recognized his skills in math, he realized the versatility of mechanical engineering and changed his trajectory.

“Deciding a major is one of the hardest decisions I ever had to make because it really felt like it would cascade into my future, which of course made me nervous. The fact that mechanical engineering was so broad gave me a sense of safety. I knew people would always need engineers, and I thought it would be fulfilling to do something that made me feel like I was contributing to a collective effort to improve something.”

“It’s very rewarding to come to a new company and immediately be trusted with the responsibility of coming up with innovative fixes.” Salas says of joining Conhagen. “They give me the freedom to come up with solutions to problems that maybe they would solve differently. Engineering problems often have multiple solutions, and they want to see which ones I come up with.”

Salas is the youngest of his four team members, which he sees as an advantage in his current role. He has the freedom to explore and express different ideas while learning from more experienced engineers. Plus, Conhagen’s customers trust his team to try new solutions that are otherwise uncharted.

“It’s certainly not crazy to think that we might have a better way to handle many of the problems we currently see in pumps,” Salas says. “Bringing in young people who have a new take on rotating machinery and who haven’t seen the way things have been done for 100 years and asking them how they would do it gives an interesting perspective. That’s where a new generation of engineers will come into play.”

Read other parts of this series and our "Pump Industry Employment Analysis" here.