What are pressure seals, and how do they work?
by Fluid Sealing Association
by Dick Dudman
by Thom Jessup
10/22/2013

A pressure seal is a valve design concept that offers distinct advantages when compared to a conventional bolted body-to-bonnet sealing mechanism. It uses the valve system pressure to provide sufficient forces against the valve body’s internal diameter (ID) and the bonnet surfaces. As the system pressure increases, the force on the pressure seal gasket also increases.

Although the only working part of the gasket is the apex or toe, the pressure seal conforms to the inside diameter of the valve. When the system pressure is activated, the toe forms a seal that can maintain thousands of pounds of pressure and keep the system media contained within the valve.

Most often, it is used for high pressure in power generation, pulp and paper, refineries and even chemical plants. Because of the reliance on system pressure to maintain a seal, these valves are best applied in systems in which the minimum operating pressure is more than 500 psi.

Is the Pressure Seal New?

The pressure seal valve design can be traced back to as early as the 1900s. Its usage increased significantly in the late 1940s to early 1950s as war technology began to be applied for consumer applications. The pressure seal was further developed to remove weight from large ships. At the time, all ships used a steam engine for propulsion, and the removal of weight improved the vessels’ operation and maneuverability.

Because many valves were necessary for steam generation, reducing the weight of these valves resulted in a significant overall weight reduction. Within a high-pressure system, shut-off valves, control valves and a host of boilers with blow-down and shock-valves operate. Also included was the plumbing that held it together. If the weight in each valve is reduced by 100 pounds, which is multiplied by a thousand valves, a huge amount of weight is removed. 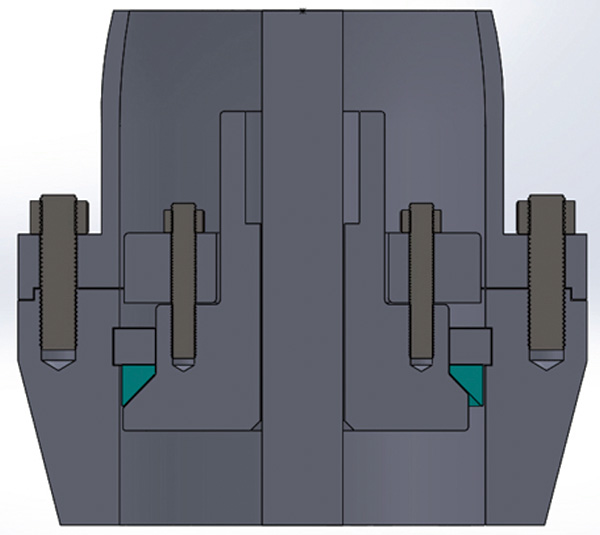 A pressure seal is a valve design that offers distinct advantages when compared to a conventional bolted body-to-bonnet sealing mechanism. It uses valve system pressure to keep thousands of pounds of pressure and system media contained within the valve.

Prior to the development of the pressure seal valve, all valves used bolted bonnets to keep the pressurized media within the valves. The bonnet was extremely heavy. Their removal was viewed as a way to lose a significant amount of weight. The new design incorporated a metallic pressure seal and eliminated the need for the bolted bonnets. This worked extremely well, saving a great deal of weight and changed valve design forever.

How Does the Pressure Seal Work?

The pressure seal gasket must conform to the ID of the valve body and the clearance between the seal, and the body has to be small. The pressure seal gasket is typically made of a malleable iron and then treated with silver to aid in conformance. The structure of the seal consists of a wider top, an angle consisting of 45 degrees or 30 degrees, and a wire-thin toe at the bottom.

The pressure seal gasket is placed just below the keeper ring. With enough force, the metal will move into its correct position and force the toe between the body ID and the bonnet surface. When the system pressure is turned on, the seal becomes a permanent part of the valve until it requires replacement.

The pressure on the gasket in pounds per square inch is enormous. It can be calculated by taking the system pressure times the area of the bonnet, which equals the amount of force generated by the system. For example, for 2,000 pounds per square inch times a 10-inch pipe the load is 157,000 pounds. Considering that the Space Shuttle weighs 292,000 pounds, not much more, in terms of load, would be needed to launch it.

The structure of a metal seal consists of a wider top, an angle consisting of 45 degrees or 30 degrees and a wire-thin toe at the bottom.

Carbon steel, brass, stainless and aluminum have been candidates for use instead of malleable iron, but most were deemed unsatisfactory. They either cracked or could not tolerate the enormous temperature, pressure and chemistry parameters.

From a valve manufacturer’s perspective, thermo and/or pressure cycling is a big problem. Metal seals do not respond well to cycling because of their high coefficient of expansion (CTE). But little or no effect is experienced with a graphitic gasket. Graphite works with every startup, and it rebounds after every cycle regardless of the number of times the cycle is stopped and started.

A shared problem for the aftermarket providers and OEMs is the replacement of a metal pressure seal gasket. Metal can become galled or welded to the valve body, which requires a jackhammer for removal. Then, once it is removed, the valve body must be re-machined to restore its ultra-smooth finish so that another metal seal can take its place.

Not so with a graphite gasket. First, it takes no more effort to remove a graphite gasket than it does to install it, and most damaged areas related to a metallic gasket operation and removal are accommodated by the graphitic gasket. When servicing a pressure seal valve, the valve surfaces rarely need to be re-machined when using a flexible graphite gasket.

Next Month: Do I really need to use a torque wrench?