The History of Pumps: Through the Years | Pumps & Systems Skip to main content

The History of Pumps: Through the Years

Read more about The History of Pumps here.

Editor's Note: This is the second of five parts of our feature, The History of Pumps. This timeline was developed through research, credible sources and the knowledge of friends in the industry, The history of pumps is long and illustrious. This account represents highlights of some of the major historical and technological developments. We welcome your contributions.

UPDATED 2018: See a graph containing the pumps throughout history.

2000 BC Egyptians invent the shadoof to raise water. It uses a long suspended rod with a bucket at one end and a weight at the other.

200 BC Greek inventor and mathematician Ctesibius invents the water organ, an air pump with valves on the bottom, a tank of water in between them and a row of pipes on top. This is the principal design that is now known as the reciprocating pump.

200 BC Archimedean screw pump is designed by Archimedes is considered one of the greatest inventions of all time and is still in use today for pumping liquids and granulated solids in both the industrialized world and in the third world—where it is a preferred way to irrigate agricultural fields without electrical pumps.

1475 According to Reti, the Brazilian soldier and historian of science, the first machine that could be characterized as a centrifugal pump was a mud lifting machine that appeared in a treatise by the Italian Renaissance engineer Francesco di Giorgio Martini.

1588 Sliding vane water pump technology is described by Italian engineer Agostino Ramelli in his book “The Diverse and Artifactitious Machines of Captain Agostino Ramelli,” which also included other pump and engine designs.

1636 Pappenheim, a German engineer, invents the double deep-toothed rotary gear pump, which is still used to lubricate engines. This gear pump made it possible to dispense with the reciprocating slide valves used by Ramelli. Pappenheim drove his machine by an overshot water wheel set in motion by a stream and was used to feed water fountains.  The emperor Ferdinand II granted him a “privilege” - the equivalent of a patent - in respect of this invention.

1650 Otto van Guericke invents the piston vacuum pump, which used leather washers to prevent leakage between the cylinder and the piston.

1675 Sir Samuel Moreland—an English academic, diplomat, spy, inventor and mathematician—patents the packed plunger pump, capable of raising great quantities of water with far less proportion of strength than a chain or other pump. The piston had a leather seal. Moreland's pump may have been the first use of a piston rod and stuffing box (packed in a cylinder) to displace water.

1738 In fluid dynamics, Bernoulli's principle states that for an inviscid flow, an increase in the speed of the fluid occurs simultaneously with a decrease in pressure or a decrease in the fluid's potential energy. It is named after the Dutch-Swiss mathematician Daniel Bernoulli, who published it in a book “Hydrodynamica.” The principle is applied to various types of fluid flow and is loosely known as Bernoulli's equation.

1782 James Watt—who invented the steam engine's connecting rod crank mechanism, which made it possible to convert the piston's reciprocating motion into rotary motion—designs an oscillating piston machine in which a wing-shaped rotary blade made a near complete revolution uncovering inlet ports in a chamber separated by a curved radial wall.

1851 John Gwynne files his first centrifugal pump patent. His early pumps were used primarily for land drainage, and many can still be seen today in pump house museums. They were usually powered by Gwynnes' steam engines. By the end of the 19th century, Gwynne was producing pumps of all sizes to cover all industrial applications, from small electric pumps to those rated at 1,000 tons per minute. His company had also begun to produce scientific pumps, e.g., porcelain pumps for chemical works. In the 1930s they were producing almost 1,000 different models.

1859 Jacob Edson invents the diaphragm pump and founds the Edson Corporation in Boston, Mass., to manufacture and sell his pump.

1874 Wilson-Snyder grows into the premier line of slurry, pipeline and refinery pumps.

1886 Jens Nielsen, founder of Viking Pump Company, invents the internal gear pumping principal while designing a pump to remove excess water that was seeping into his limestone quarry from a nearby creek.

1908 Hayward Tyler creates its first electric motor for use under water and develops the wet stator motor for use as a boiler circulation glandless motor-pump.

1911 Jens Nielsen builds the first internal gear pump, founding the Viking Pump Company. The Viking Rotary “Gear-Within-A-Gear” pump (the first of its kind) is placed on the market.

1912 Durion, a universally corrosion-resistant material, is invented by the Duriron Castings Company (later known as Durco Pump) and is applied to process equipment.

1915 Albert Baldwin Wood invents the Wood trash pump. Wood spearheads the reclamation from swamp and the efforts to develop much of the land now occupied by the city of New Orleans. Some of Wood's pumps have been in continuous use for more than 80 years without need of repairs. New ones continue to be built from his designs.

1916 While Armais Sergeevich Arutunoff first invented submersible pumps in Russia in 1916, their use in the United States did not begin until the 1950s.  Arutunoff first designed his pump for use in ships, water wells and mines. He altered the design to work in oil wells. Thanks to further refinements to Arutunoff's design, there are more types of submersible pumps, allowing use in other applications such as pumping drinking water, creating fountains and pumping wastewater.

1916 The first DORRCOTM Suction Pump is built by Dorr-Oliver Pump Company for the mineral process industry.

1921 Harry LaBour founds LaBour Pump Company. A pioneer in the development of pumps for the chemical industry, LaBour developed corrosion-resistant alloys to incorporate into his pumps. Until his time, sulfuric acid was always pumped with lead pumps, the only known material that could handle certain concentrations of the acid.

1923 Byron Jackson demonstrates the first use of centrifugal pumps for oil pipeline and the first automatic booster station.

1926 O.H. Dorer receives a patent for the first inducer, which reduces the required NPSH. Inducers did not become incorporated into standard pump lines until the 1960s.

1927 Viking introduces a line of hazardous liquid pumps for use in the fuel oil market.

1929 Stork Pompen produces the first concrete volute pump for drainage, integrating the pump housing in the civil construction of the pumping station.

1930 While inventing a compressor for jet engines, aviation pioneer René Moineau discovers that this principle could also work as a pumping system.The University of Paris awarded Moineau a doctorate of science for his thesis on “the new capsulism.” His pioneering dissertation laid the groundwork for the progressing cavity pump.

1933 The original version of the Bush Pump is designed as a closed-top cylinder pump. In 1960 the design was modernized. The base of the well was from then on bolted to the well casing and got its current name, The Zimbabwe Bush Pump, the National Standard for hand pumps in Zimbabwe. After Zimbabwe's independence in 1980, the government creates its own modernized version of the pump, B-type Zimbabwe Bush Pump. The pump is today regarded as a national treasure. In 1997, it was pictured on a postal stamp.

1933 J.C. Gorman and Herb Rupp introduce a pump with a “non-clogging” feature. It outperforms any other self-priming centrifugal pump previously invented. The company Gorman-Rupp is established.

1936 Robert Sheen invents the metering pump. The core of his invention was a method of controlled volume that was inherent to the pump. The first pumps were assembled in the basement of his father, Milton Roy Sheen's, home, where the initial patterns for castings were made.

1936 Robbins & Myers acquires the North American license for the Moineau progressing cavity pump and brands it with the name Moyno.

1939 Durco invents Alloy 20, which is the standard industrial material for corrosive surfaces.

1939 Dorr-Oliver Pump Company develops the Oliver Diaphragm Slurry pump for slurry transfer. Originally designed for mining slurry transfer with their associated acids, it developed into a Primary Sludge Underflow Pump for the wastewater industry starting in the 1970s after the Clean Water Act.

1940 Reuben Smith, of Smith Precision Products Company (Smith Pumps), receives the first approval for an LP-gas pump from the California Industrial Accident Commission. This was for the model 4X pump and the approval was a "suitable for use" certificate.

1942 The Gorman-Rupp team creates the first commercially available solids-handling trash pump to respond to the contractor's need for a pump to withstand the considerable rigors of pumping out trash-laden septic tanks, cesspools and outhouses.

1947 Flygt's Sixten Englesson, a master of engineering, develops a prototype for the first submersible drainage pump, which is later known as the “parrot cage,” or B-pump, used in mining for construction.

1948 Smith Precision Products Company receives the patent for the first mechanical seal supplied for liquefied gas transfer pumps. It was first put into production in 1947.

1950  Vanton develops the Flex-i-liner sealless self-priming rotary pump which handles corrosive, abrasive and viscous fluids as well as those that must be transferred free of product contamination.

1954 Smith Precision Products Company (Smith Pumps) begins working with the Underwriters Laboratories to develop their first Standard for liquefied gas pumps, UL-51, which is still in use today.

1956 Sixten Englesson develops for Stenberg-Flygt AB the submersible sewage pump, called the C-pump, with a discharge connection and level regulator.

1957 Ruhrpumpen Gmbh begins the production of process pumps under the license of Pacific.

1959 Viking Pump Company launches abrasive liquid heavy-duty pumps and handles the printing ink for more than half of the major U.S. newspapers.

1962 Grundfos places the first circulator pump into the market with variable speed regulation. 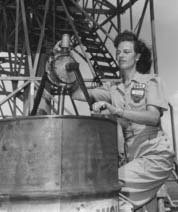 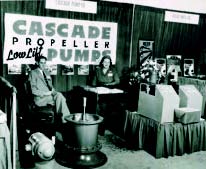 Above: Blackmer sliding vane hand pumps used for the transfer of solvents by Pan Am in the 1950s. Photo courtest of Blackmer.

1969 Mouvex launches the first sealless rotary pump not based on magnets.

1970s Gorman-Rupp invents the bellows-metering pump and the oscillating pump, while the Mansfield Division acquires the Roto-Prime pump.

1971 Gusher develops a purge hole system that enabled pumps to handle up to 30 to 40 percent entrained air.

1978 KSB puts the BOA-W line onto the valve market. The first soft-seated standard valve is able to cope with dirt in the fluid.

1980s Viking introduces the Universal Seal and Viking Mag Drive lines of internal gear pumps—both the first of their kind in the industry.

1994 Baha Abulnaga invents the slurry and froth pump with  a split vane impeller. The split impeller helps to reduce recirculation in slurry pumps by dividing the space between the main vanes without reducing the passageway at the narrowest point, which is the eye of the impeller. In froth pumps, it helps to break up air bubbles that form and tend to block the flow.

2003 Sims becomes the first company to have composite pumps and baseplates, shock and vibration qualified by the United States Navy.

2006 Sims manufactures the largest structural composite centrifugal impeller in the world. This huge impeller was installed in a cooling tower pump for Puerto Rican Electrical Power Company. It is 50 inches in diameter and consumes 2,000 horsepower.

Read more about The History of Pumps.

Click here to see readers' response to this article.