How Automated Optimization Can Push the Limits of Efficiency

With the right setup, this software can open new possibilities for system and pump design improvements.
by Mark R. Anderson (Concepts NREC)
05/01/2015

Automated methods first emerged from the aircraft propulsion industry and became available to a wider audience in the mid-1990s. The first optimization products promised radical improvements in the design process but were expensive. With time, competition in the software market and a better understanding of the inherent limitations of the technique provided the industry with a more balanced perspective.

Neural networks are based on a network of processors similar to the neurons of the brain. Despite the sophisticated naming conventions and schemes, the basic goal is simple: find the combination of input values that yields the best result.

The automated optimization process is highly dependent on what is defined as best, often referred to as the "objective function." The best schemes for optimization depend on the nature of the results and how they are distributed across the numerical space. Figure 1 shows a simulated annealing method in a simple two-dimensional variable space. 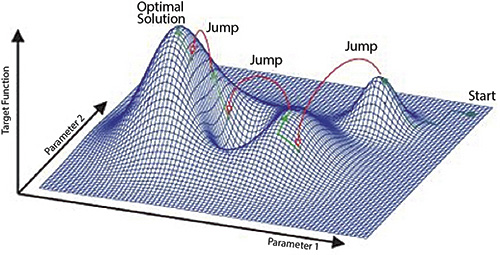 Various optimization schemes have been widely published. Although proprietary schemes do exist, most schemes available in commercial software packages are not restricted. The key functionalities provided by commercial optimization products are the ease of setup and control of information flow. The input and output flow of information between the optimization program and the external solvers is one critical area. Advanced formatting and text parsing functions enable this flow. Advanced plotting and display functions that enable the user to see the progression of the solution across a complex and multi-faceted range of variables is also important. Software also provides control of calculations across distributed computing nodes.

Anything that can be quantified through a model and has multiple inputs affecting the result can be used as the basis for optimization. In pump design, a typical option might be efficiency determined through a computational fluid dynamics (CFD) solution. However, any model such as meanline analysis or streamline curvature could be used to quantify performance, and finite element analysis (FEA) could be used to determine stress levels. Other more esoteric models can be also used in the objective function.

Variables such as casting, machining or assembling costs can be used, provided they can be discretely quantified. Other phenomena such as noise, vibration and lifespan can also be studied.

Combinations of analyses can be used to define the objective function. A common combination might be efficiency from a CFD solution and maximum stress level from an FEA analysis. Such approaches are called multidisciplinary optimization (MDO) and are common in practice. Most real-life manual designs require some compromise of several competing factors, and MDO methods can account for this in optimization.

Special attention is required to constrain the model input and to scrutinize the model output for validity. A poorly chosen input range can force the model outside the valid range of results and render the process moot.

A CFD solution that is not converged or has failed will give bad signals to the optimizer. Other constraints are often needed to ensure a rational result. A user can easily find that the result dutifully produced from the optimizer is either not manufacturable or has been driven to astronomical size if the proper constraints were not provided.

This article will examine two CFD-based optimizations that demonstrate the optimization process (see Figure 2). The first study is an optimization of a three-dimensional volute. In the study, the flow rate was fixed and the overall head rise was predominantly determined by the impeller, which was also unchanged. 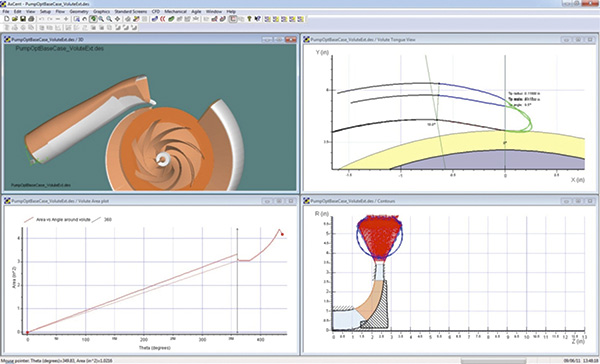 The study used three separate parameters to control the shape of the tongue region of the volute. The objective function was taken to be the total-to-total efficiency of the stage. 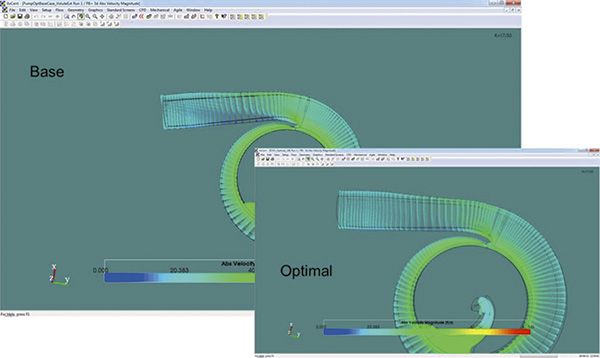 Figure 3. Flow field result for the baseline and optimized volute. Note the more uniform velocity distribution after the tongue. (Courtesy of Concepts NREC)

Efficient parameterization of the inputs is a critical factor in the success of an optimization. The case is a good example of how a system-level approach is the most cost-effective.

The design space must be explored as efficiently as possible to ensure that a reasonable number of iterations are needed to actually get to the optimum. Systems using parameters that define a wide variety of coherent shapes with a minimal number of inputs are superior to other methods.

The second study also used CFD, but this time to optimize the impeller. A snapshot of the grid used to analyze the baseline design is shown in Figure 4. The analysis included 14 input variables. Ten different outputs were considered from the solver, either as constraints or included directly in the objective function. 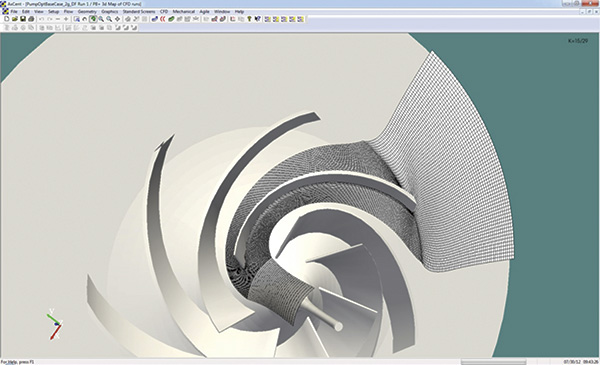 Figure 4. Cross-section of the structured grid example for the pump impeller optimization (Courtesy of Concepts NREC)

The result of the process yielded a design with 1.2 percent higher efficiency at the design point, with no penalty at the off-design flow rates. Head rise went from 99 to 104 feet at the design point. About 450 CFD solutions were required by the optimizer (see Figure 5). 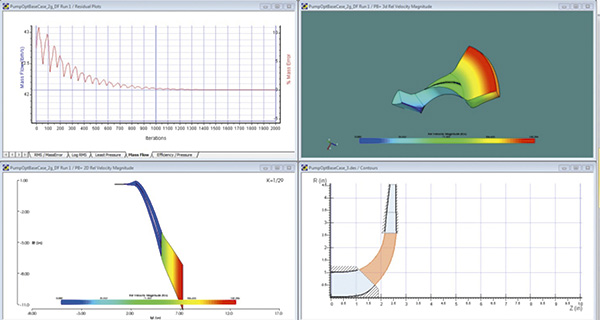 Automated optimization is becoming more widely used in the turbomachinery industry at many levels. While commercial offerings have improved the process significantly, making effective use of optimization still requires expertise on the part of the user.

That said, a properly designed optimization exercise can both streamline the entire design process and discover improved performance from regions of the design space that the user might never have considered previously. Expanded capability in modeling methods and reduced cost in high-powered computing resources both point to the increasing use of advanced optimization methods in the pump industry.

Mark R. Anderson is Chief Technology Officer at Concepts NREC. He received his B.S. at Northeastern University and his M.S. at the Massachusetts Institute of Technology, both in mechanical engineering. He has authored more than 25 papers throughout his career.