Located on 29 acres within Tacoma, Washington’s Point Defiance Park, the Point Defiance Zoo and Aquarium is home to more than 550 land and marine animal species. On any given day, visitors can see everything from sharks, sea turtles and giant octopus, to tigers and red wolves.

The aquarium comprises two separate facilities. The South Pacific Aquarium is home to massive sharks, a tropical lagoon and Stingray Cove. The newer Pacific Seas Aquarium, which opened in September 2018, presents the full spectrum of Pacific Coast marine habitats from the cold Northwest to tropical Baja California with a 280,000-gallon warm-water exhibit.

This facility also includes a rooftop water reclamation system that recovers some of the northwest’s typically abundant rainwater to flush the toilets in the aquarium. If that system runs low, it automatically switches to city water.

The rainwater reclamation is just one example of the zoo and aquarium’s commitment to environmental sustainability. As part of its mission “to practice and promote effective conservation on behalf of the world’s wildlife,” Point Defiance Zoo is constantly looking for ways to reduce its carbon footprint and increase efficiencies. This led to installing 71 solar panels in 2018 to power all areas of the zoo; replacing all of the lighting throughout the zoo and aquarium with LEDs; and installing variable frequency drives (VFDs) on pumps and motors to reduce energy consumption. 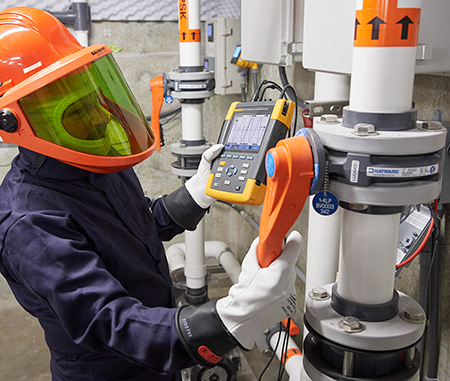 This latter move is significant. The aquarium needs to move hundreds of thousands of gallons of water daily, requiring many pumps and lots of energy. Some motors power filtration equipment, ozone generation and temperature control systems that are critical to ensuring the health and safety of the aquarium’s marine mammals and sea turtles.

“If we use less water and less electricity and get an extra year of life expectancy out of existing pumps, that definitely saves money,” said Fred Ramey, operations manager for the Point Defiance Zoo and Aquarium. “The less money we need to spend on emergency maintenance costs and replacing pumping systems, the more money we can spend (on) our animals.”

Prior to 2018, pump maintenance routines consisted mostly of using clamp meters on running motors to measure current and voltage. Megohmmeters were also used to measure resistance in motor windings on powered down motors.

Other than that, technicians used their senses to detect potential deterioration in the equipment. “We’d listen for screeching that might indicate bearings going out,” said Doug Immerman, lead life support and water quality technician for Point Defiance Zoo and Aquarium. “We’d also check whether the pump was hot to the touch, if there were any vibrations in the piping, or if there was reduced water flow.”

These approaches helped technicians determine the immediate condition of pump motors, but required manual calculation of efficiency metrics. This also provided only a snapshot in time and did not allow them to effectively spot trends in the overall health of the motors over time.

One sustainability idea came in 2018 from Immerman and Josh Harvey, an electrician for the zoo/aquarium. The pair had learned of a power quality and motor analyzer that calculates real-time performance data using electrical parameters (instantaneous voltage and current) in combination with motor rating plate data. By calculating rotating speed, load, torque, efficiency and the motor derating factor in operating mode, the analyzer provides information to further improve pump performance.

“When Doug and Josh brought this motor analyzer to the attention of our sustainability committee, they talked about how it would allow them to get more efficiency and more life out of our existing pumps and motors,” Ramey said. “That ties into our entire sustainability focus, because if we can get more life expectancy and energy efficiency, and use less water, it supports the zoo’s overall mission.” 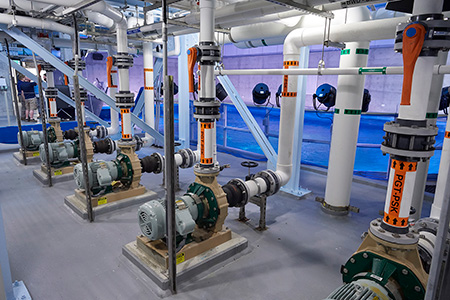 The Point Defiance Zoo sustainability committee approved the purchase and after only a couple of hours of training for two people, the aquarium maintenance team started putting the power quality and motor analyzer to work. It is used in the maintenance routine for approximately 60 pump motors in the aquatic animal care center, both aquariums, the marine mammal systems, pumping stations, and the exhibit pools for the Asia animals.

“Really, anywhere we have a water pump or a motor that we can attach the analyzer to, we have used it,” Immerman said. “We just hook it up to the system and monitor the pump curve. The analyzer calculates the pump efficiency, and we can use that information to make educated decisions about whether we need to adjust valve flow rates to bring pumps into optimal curve, lubricate or replace bearings, or align the motor to the pump.”

The results have helped the aquarium frame an action plan to improve metrics.

“This motor analyzer has helped us identify some old pumps that are now oversized due to the way systems have changed over time,” Harvey said. “When it comes time to replace them, we can put in a more efficient model that will do the job but won’t waste energy.”

Rapid Improvements Across the Zoo

“The best thing about this analyzer is being able to have a value that directly correlates to the adjustments that we make,” Immerman said. “Prior to using this motor analyzer, we would make valve adjustments based on pipe vibration and water flow. Now, we’re able to hook up the analyzer and look directly at that pump curve and directly increase the efficiency of that pumping system by manipulating the valves or the variable frequency drives.”