How To Avoid Compression Packing Failure

Compression packing has been around since the beginning of the industrial revolution and is still used extensively in types of equipment in which a stuffing box seal is required to prevent loss of process fluids to the environment. While advanced sealing solutions for rotary applications, such as mechanical seals, emerged over time, compression remains an important industrial tool.

Figure 1. Packing in a stuffing box (Graphics courtesy of FSA)

Built-in lubricants are released from the packing as gland pressure is applied. These lubricants are particularly important during equipment startup.

Eventually, the process fluid, or an external flushing fluid, takes over the packing's lubricating function and provides a continuous film of fluid to reduce friction. Heat dissipates through the shaft, packing, pump housing and process fluid.

Built-in lubricants are gradually lost during pump operation, often requiring further gland adjustment. Gland pressure is regulated to provide the optimum lubrication to seal and prevent overheating. Over time, loss of the lubricant and wear of the packing rings contribute to gradual decreased effectiveness, leading to the need to replace the packing.

The choice of packing material affects the operating costs of centrifugal pumps, but little is known about the relationship. The Fluid Sealing Association (FSA) and European Sealing Association (ESA) began to address this lack of data by developing industry standard test methods to shed light on how packing behaves.

The acronym "STAMPS" can be used to remember key considerations that can determine which packing material and construction should be selected:

One common mistake is the tendency to maximize the packing's time in service to a perceived point of failure before replacing it. Defining failure is more a matter of opinion than science.

Signs that the packing has failed include increased leakage, smoke at the stuffing box or uncontrolled leakage at the gland.

Safety-conscious operators service the pump and replace the packing at regular intervals. However no common criteria for determining the replacement frequency or relating it to the packing material are available. An acceptable replacement cycle time is heavily dependent on the application, the equipment and the packing.

The confusion occurs because of the forgiving nature of compression packing. Pump operation is not impaired until the packing fails. It should be replaced long before this occurs. For any type of packing, operating costs are relatively fixed when it is functioning correctly. As performance deteriorates, operating cost increases are much larger than the initial cost of the packing ring set.

Based on the way packing works, three factors affect costs:

The best practice is to monitor changes at the stuffing box and replace the packing before costs increase. There are many costs, and depending on each application any of these costs could be the most significant. For example, the cost of product loss and product dilution could be much higher than power consumption or flush water losses depending on location and the cost of labor.

After the pump and auxiliary systems have achieved a steady state, measure the temperature at the stuffing box and record the difference from the ambient temperature. For example, if ambient is 65 F and the stuffing box is 110 F, the operating baseline differential is 45 F. 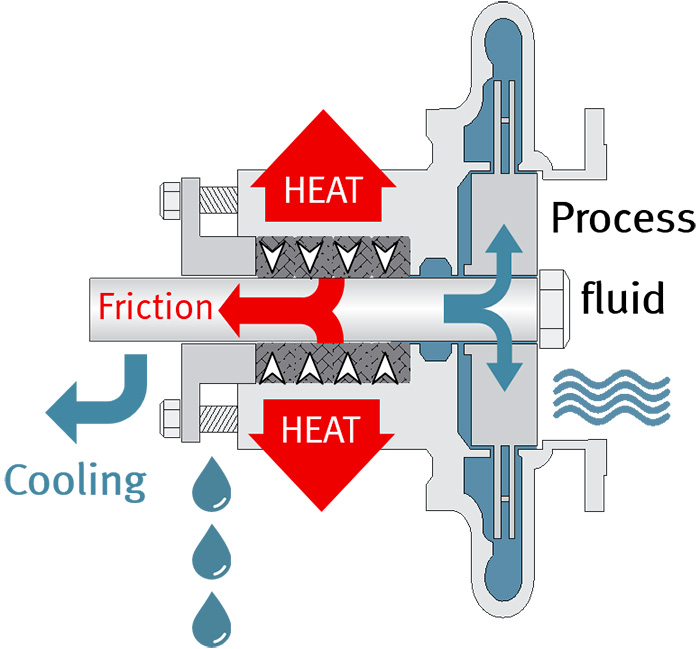 Measure the drip rate from the stuffing box in drips per minute and record that as well. Over time, operators will adjust the gland follower to maintain this drip rate. Signs that the packing is failing and needs to be replaced are now easier to identify and can include any of the following:

Following these simple steps and replacing the packing can improve performance and save money by avoiding excess loss of power and process fluid. Increased adjustments to the gland and extending of the shaft/sleeve life are no longer needed.

Next Month: What does the new FSA/ESA Gasket Handbook contain, and how was it developed?