How to Decide Between Low & Medium Voltage for Motor & Starter Systems

End users must consider many variables to choose the better solution.
by James Nanney
10/25/2016

An overlap between 460 and 4,000 volts exists where multiple types of motors and starters are readily available. The question, though, is which one is better? Like most engineering questions, not only does the cost need to be considered, but also the differences in each operating voltage in the context of the application.

Even with the small range of motor ratings, there are more than a few variables. Here are a few assumptions to help simplify the discussion: The ratings of 500 to 2,000 horsepower (hp) and 460 volts or low-voltage (LV) versus 4,000 volts (4kV) or medium-voltage (MV) supply voltage will be compared, though larger LV and smaller MV options are available. The motor comparison will be based on 1,800 revolutions per minute (rpm) and totally enclosed, fan-cooled (TEFC) or open drip proof (ODP) because these types are the most common.

When the cost of a 500-hp LV motor is half of its MV cousin and the two are compared, the question of “which is better” is expected. Looking at the motors, it would seem they are similar in frame (size). At 2,000 hp, the LV and MV motor are close in cost. So why is there a cost difference? Are there other differences?

The tradeoff for higher efficiency and a higher rpm level is lower starting torque. High starting torque loads or applications that cannot be started unloaded, combined with voltage drop on the line when starting, can lead to a motor not coming up to speed.

The motor starting amps of 600 percent or more and the ability to supply those amps influence the choice of a starter.

A 460-volt motor takes about nine times the current of a 4kV motor for the same rating. For reference, a 500-hp LV motor would be rated for 580 amps versus 70 amps at 4kV.

Understanding what the utility will allow or what the grid can support should be part of the evaluation for determining the starting method.

There are three basic means of starting: across the line, also known as direct on line (DOL); soft starting or reduced-voltage starting; and variable frequency drives (VFDs) for starting only or continuous operation.

An LV mechanical starter, even for a 500-hp motor, is not practical because of cost. Few power grids can handle the inrush of more than 3,500 amps without significant voltage drop. The common option for LV above even 100 hp is a soft starter. The current can be reduced to 250 to 450 percent of the motor full-load amperes (FLA) depending on the motor loading at starting.

LV VFDs are available even at 2,000 hp or larger. They are made by taking the largest single-stage VFD from a vendor, typically around 500 hp, and putting two together to achieve 1,000 hp or three to reach 1,500 hp. With each added block, the price goes up. As a result, the soft starter, which may only be 30 to 50 percent of the VFD cost, can look attractive.

The reduced cost of VFDs in recent years and their ability to improve process efficiency have made them a more common choice. Even when not required, VFDs are often requested because of the familiarity with the technology; their reduced cost and flexibility make them easy to apply. 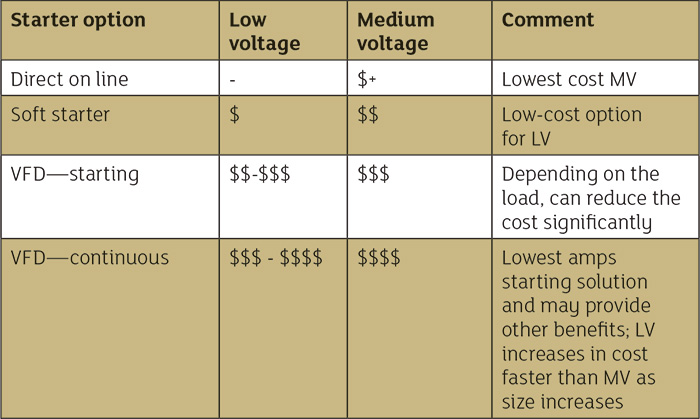 For MV, the options of DOL, soft starter and VFD are available. At 500 hp, there is a large difference between the MV and LV VFD price. The cost narrows as the horsepower increases. The MV VFD amperage is so small, the cost difference from 500 hp to 1,000 hp may increase 20 percent while the LV doubles. For MV, the least expensive is DOL, followed by soft starting and the VFD for starting only.

A VFD used for starting only is less expensive than one used for continuous operation, and this option is becoming more common in many applications where there is little or no advantage to VFD speed control. The concept is the same for LV and MV. The VFD “starts” and then a contactor bypasses the VFD, putting the motor across the line. The VFD will start a load with the minimum amps for any system, using only the motor’s FLA in normal applications.

The short start time means the overload rating can be used for the motor starting, while the actual amps required for starting are all that is needed from the VFD. If the motor can be started unloaded, the VFD needs only to be sized to the current the motor used as it starts. With a pump curve and motor data, the vendor can calculate maximum current required for starting.

A lightly loaded motor at starting may pull 25 to 50 percent of the motor FLA using a VFD. So a 2,000-hp motor will only need a 500-hp VFD if 25 percent is required. The VFD also can be used to start multiple motors,
reducing the cost per LV or MV motor. Large motors using a starting VFD need a bumpless transfer to line. The bypass package should include a closed transition synchronizing system.

There are differences in the equipment beyond horsepower and voltage that end users should consider. Most LV drives are not Institute of Electrical and Electronics Engineers (IEEE) 519 compliant as standard, common on MV VFDs. Most utilities require IEEE 519 compliance in some form. The MV VFDs can include short-circuit protection and a disconnect for a relatively low cost. For the LV VFD, it must be added to the switchgear or a custom package. Larger-horsepower installations may come with the expectation of a longer operating life in excess of 20 years, so specifications may need adjustment.

All induction motors are reliable, but an MV motor with formed coils that has been vacuum pressure impregnated statistically is more reliable than an LV random-wound motor winding that has been dipped and baked. If reliability is important for the application, an LV motor spec will call out IEEE 841, which is similar to American Petroleum Institute (API) 547 for MV. LV motors cannot meet the higher API 541 specification—this is why critical service motors will be MV even at 250 hp. 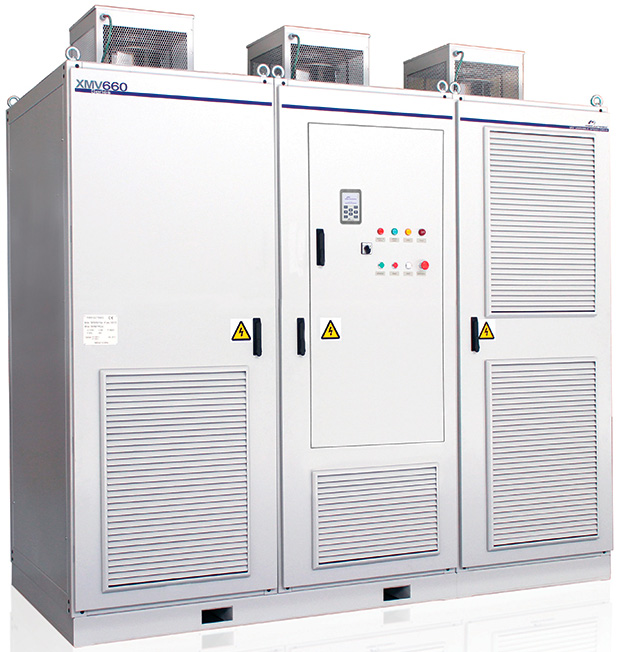 As previously mentioned, LV motors use a cast aluminum rotor and are considered non-repairable compared with an MV copper bar rotor. The commercial pressure on LV VFDs and soft starter products means replacement of a product line in five years or less. MV VFDs and soft starters will have a longer product life cycle and should provide an upgrade path to the next generation. No one wants to commission a 1,000-hp motor and VFD to find out parts will be available for only the next six months. Asking about the obsolescence policy is a good start—even better is to ask if parts are still available for the model previous to the one under consideration.

If the application is going to run 24/7, the LV VFDs will have a three- to five-year life if running near full load. The MV design should be closer to 20 years, so users should request an LV cost for a 20-year design life to get a fair comparison. Typically, the LV VFD will jump at least one frame size. The cost of the LV and MV will be similar.

Cabling between the motor and starter is another variable. The reduction in cabling cost is a reason to use MV. If a VFD is used continuously, the recommended cabling must be factored—a long cable run can have a large impact on the project budget. 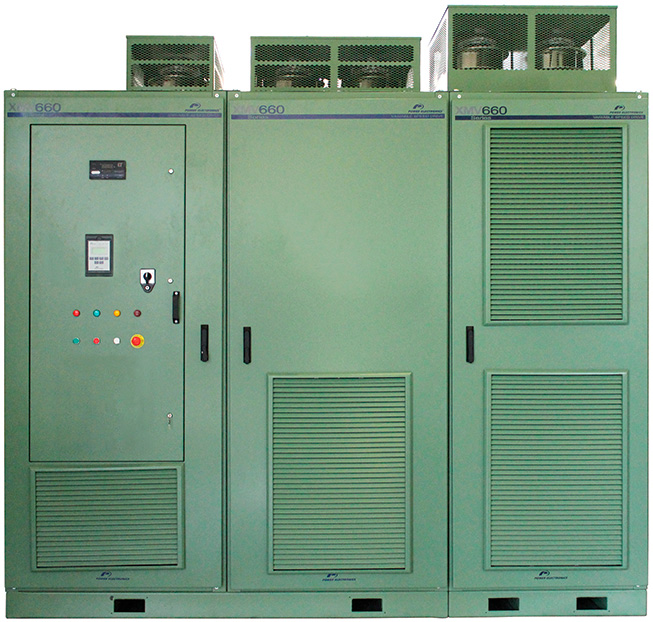 Service and maintenance should not be overlooked. With the current product range, a soft starter or VFD with the same form and function will not be much different in LV and MV. Also, the VFD should be wall-mounted and not need rear-access for servicing, which adds to building costs.

Starting a large motor often requires new utility service. Utility requirements and cost can change the calculation for determining which is better. The total cost of setting a new 460-volt service for a large motor can be as much as the motor and starting method. Additionally, most MV VFDs can accept utility voltage, such as 6.9kV or 13kV, directly with an output of 4kV for the motor, avoiding setting a new transformer cost.

Large motor controls require space that may make it challenging to fit the new equipment in an existing facility. In an existing control room, adding air conditioning can be a $50,000 surprise cost to handle a large VFD. An option for LV and MV is a National Electrical Manufacturers Association 3R package—the unit is outside, requiring no control room space and no air conditioning. The MV units can
be rated for 55 C and require no air filters.

To understand if LV or MV is better, users should start with the utility and not the motor. Understand what the utility requires for large motor connections and what the grid will support, as well as the cost if the service needs improvement. Knowing this information narrows the choices.

End users should evaluate the application requirements for reliability based on application. If the application is continuous, consider the life expectancy of both operating voltage equipment. VFDs are more common and reliable, even in large horsepower applications. After considering all variables, end users will be able to recognize the better solution.