How to Detect & Monitor Cracks in Pumps

Vibration changes can indicate cracks in pump rotating components, which can cause severe malfunction and failure.
by Amin Almasi
03/13/2014

Crack-related catastrophic pump failures have been reported worldwide. Cracks are often reported in rotating components. A propagating crack in a pump shaft or a rotor assembly can affect pump vibration. These cracks are primarily detected based on the changes in 1X, 2X and sometimes 3X vibrations.

Many mechanical or thermal causes can initiate a crack. Afterward, the crack growth could be driven by a combination of thermal and mechanical loads, particularly those causing alternate cyclic stress in the shaft. A crack is often influenced by mechanical stresses (particularly bending stresses), thermal stress fields and liquid pressure in the cracked area.

For many pumps, high mechanical and high thermal stresses can arise in the geometric transition zone. Thermal fatigue is the reason for many crack initiations. Some cracks originate from surface micro-cracks, which can be caused by manufacturing or operational processes. On the shaft surface—especially where the shaft or sleeve contacts the liquid—the maximum stress can be expected because of the maximum thermal gradient and/or the maximum bending effect. Even if a shaft sleeve is used, high stress could still occur on the shaft surface.

An analytical formulation of a cracked shaft has periodically variable stiffness with two times the rotor speed (because a cracked pump rotor presents two events at each rotation). In other words, the radial load is applied to the rotor two times per rotation because of the periodically variable stiffness. An additional unbalance-like excitation with a 270-degree phase lag also exists. The early diagnosis of a cracked shaft is based mainly on changes in 1X and 2X vibration vectors. These data can be monitored at steady-state conditions and also during transient startup (or shutdown) conditions. The latter data are especially meaningful because the vibration changes are significant in the 1X and 2X.

The deviation of 1X and 2X vibration data from their acceptance regions, which are based on normal operating conditions, can provide alarms and early warnings of a cracked rotor. The rotor centerline position and slow-roll data can provide additional information about the rotor bow situation. The observation of the orbits is also helpful in diagnosing a crack in a shaft. A high 2X vibration component causes the appearance of an internal loop on the rotor orbit (the 2X orbit is forward). The crack-related weakening of the rotor in a constant-speed operation and a shift in the natural frequency can be detected during constant rotating speed. At a certain time, the 1X or 2X vectors exhibit resonant features.

A propagating crack generally produces a bow, which can be magnified by mechanical or thermal stresses and also by the liquid pressure penetrating the two crack faces if the cracks contact the pumped liquid. This bow can generate high amplitude 1X vibrations. The 1X vibration components are generated by the crack-related bow and by the mechanical, thermal and hydraulic unbalances. The 1X vibration increases consistently when the unbalance is in phase with the bow. This situation is most likely to occur because the crack usually originates from micro-cracks in which the maximum stresses are developed. 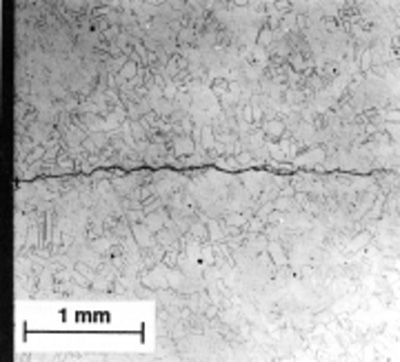 Image 1. A crack in a pump shaft

The 2X analysis is usually the most convenient crack-detection method. An open crack generates 2X vibration components, which can be proportional to the depth of the crack, the bending moment and different loads, such as hydraulic forces. The relationships are usually nonlinear. A crack with a small depth would only generate a weak excitation of the 2X component. Detecting a crack from an abnormal evolution of the 2X vibration component could be difficult. Sometimes, the 2X component is so small that it may be masked by noises. In such cases, a crack is only recognizable with advanced filtration methods—such as a nonlinear, Kalman filter analysis or similar advanced nonlinear filters.

The dynamic load, the stiffness and the damping of the pump bearing and seal can show a high sensitivity to small differences in the design, manufacturing details and tolerances, assembly (assembling tolerances), and operational effects (such as degradation). The dynamic responses and vibration measurements of similar pumps can differ because of these effects. A theoretical prediction of the exact vibration behavior, such as the vibration amplitude, of a cracked shaft would not be suitable or possible for crack detection. Trending can be the best tool for this purpose. 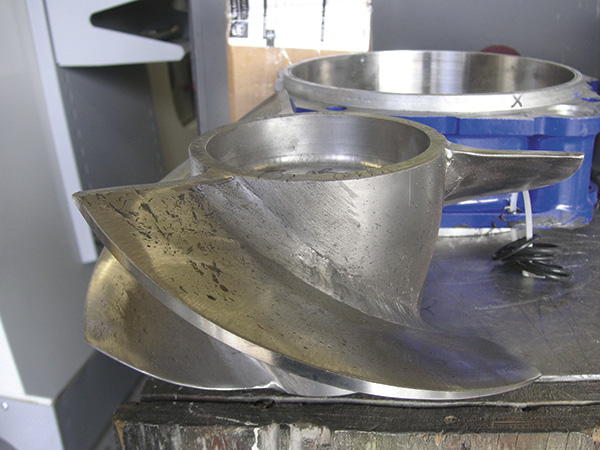 This case study discusses a crack initiation and propagation in a pump shaft. In this pump, the steady-state 1X and 2X vibrations were reported at around 26 microns and 7 microns, respectively. During a 10-day period, the 1X and 2X vibrations increased to 42 microns and 11 microns, respectively, which is approximately a 60- to 70-percent increase.

After another 10 days (a total of 20 days), the 1X and 2X vibrations reached 77 microns and 18 microns, respectively—about three times the established normal operating vibrations. The pump tripped and the shaft was inspected. The high vibration was caused by a propagating crack on the shaft.

Thermal stresses and bending stresses are usually responsible for micro-crack generation, crack initiation and propagation of the crack. Generally, thermal loads, bending stresses, axial loads, mass unbalances and liquid pressure (pumped liquid) entering two crack faces can generate a stress distribution within the shaft and help increase a crack. The influence of the axial force keeps the crack open, and the liquid pressure on the crack faces acts in the same way. Crack detection in a rotating assembly is generally based on the changes in 1X and 2X vibrations and, sometimes, 3X vibrations.

Amin Almasi is a rotating machine consultant in Australia. He is a chartered professional engineer of Engineers Australia (MIEAust CPEng – Mechanical) and a chartered engineer certificate from IMechE (CEng MIMechE), RPEQ (Registered Professional Engineer in Queensland). He specializes in rotating machines including centrifugal, screw and reciprocating compressors, gas and steam turbines, pumps, condition monitoring and reliability. Almasi is an active member of Engineers Australia, IMechE, ASME, Vibration Institute, SPE, IEEE, and IDGTE. He has authored more than 60 papers and articles dealing with rotating machines. Almasi can be reached at amin.almasi@ymail.com or +61 (0)7 3319 3902.