How does discharge piping impact pump performance and reliability?

A pump’s outlet (discharge) piping flow characteristics normally will not affect the performance and reliability of a pump, with a few exceptions. In some cases, sudden valve closures can cause excessively high pressure spikes (surge or water hammer) to be reflected back to the pump, possibly causing damage to the pump, system piping or components.

When the flow of liquid is suddenly stopped, the liquid tries to continue in the same direction. In the area where the velocity change occurs, the liquid pressure increases dramatically due to the momentum force. As it rebounds, it increases the pressure along the pipe near it and an acoustic pressure wave is formed.

This is analogous to the waves on a pond after a stone is dropped in. The waves radiate outward in all directions. As the wave travels further from the center, its energy is spread over a larger area and it will dissipate and eventually die out. In a pipe, the acoustic pressure wave can only travel along the pipe. The potential magnitude of the pressure wave can be tremendous, so in systems where there may be a sudden closure of a check valve or sudden stopping of the pump, a transient flow analysis may be required. 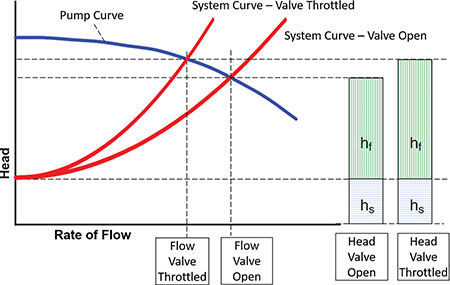 Additionally, the discharge piping of a pump system is a primary source of friction. This will impact the pump system curve, which is a representation of the head required to deliver a specific flow through the system (i.e., the head required from the pump). System curves have a static head (hs) component that is made up of elevation difference or pressure difference between the source and the destination. The static component of the system curve is typically independent of the flow velocity in the piping system; however, the friction head (hf) component is dependent on the flow velocity in the piping system. Since the friction head component is dependent of the velocity in the piping, the discharge piping size is a leading contributor to friction head, along with fittings and valves in the system.

This is important because the pump will operate at the intersection of the pump curve and the system curve, so if the system requires additional or less head—pressure—than the pump was selected for, the pump may operate at low flow rate or high flow rate, which impacts the pump’s overall reliability.