How to Extend Equipment Life With Bearing Isolator Labyrinth Seals

The importance of seal selection in harsh applications.
by Jeff Blank
Garlock
06/16/2022

While the use of oil seals to retain lubrication in rotating machinery is common, bearing isolator labyrinth seal technology is often selected to protect bearings and lubrication. Manufacturers, repair facilities and users often select bearing isolators for use in harsh applications where conditions such as contamination, shaft misalignments and equipment vibrations are a concern to avoid frequent replacement. Bearing isolators can provide improved reliability and protection of the bearing and extend the mean time between failure (MTBF) of equipment. In a time when facility managers are focused on maintaining costs and limiting production losses due to downtime or unplanned outages is critical, bearing isolator labyrinth seals offer several benefits.

Bearing isolator labyrinth seals are used to protect the bearings and bearing lubrication in rotating equipment—such as electric motors, gearboxes, pumps and split pillow block bearings. In simple terms, a bearing isolator consists of a stationary component (stator) and a rotary component (rotor). The assembly of these components creates a narrow labyrinth path through the seal. This design prevents ingress of contaminants into a bearing arrangement.

In many instances, bearing isolators can fit in the same space as an oil seal without requiring modifications to the geometry of the seal location. There are several reasons why a bearing isolator would be selected as an OEM option or as a retrofit in existing equipment. Bearing isolators provide several benefits, including long service life and a noncontact seal configuration that will not damage shaft surfaces.

Contact lip oil seals are a simple solution to retain lubrication in rotating machinery. However, there can be limitations in performance and reliability. Initially, an oil seal can provide adequate sealing characteristics, but over time operating conditions, configuration and condition of the machine can contribute to wear—and eventual failure—of the seal. The average life of a commercial oil seal can be around 1,500 hours depending on application variables. A relatively clean application that meets or exceeds recommended operating parameters for the seal will likely allow for longer service life, compared to applications with harsh environments and increased misalignments, operating temperatures and shaft speeds. The good news is that the MTBF of rotating equipment can be improved and unscheduled shutdowns can be minimized with the use of a bearing isolator, potentially lasting the life of the equipment.

When a lip seal is used in a dusty or dirty operating environment, residue and debris can eventually embed under the seal lip. If a seal has leaked, the presence of oil or grease on the shaft will further contribute to a buildup of contamination under the seal lip. This will eventually abrade the lip, allowing lubrication to leak and shaft wear and grooving. To overcome these issues, a user may overfill the bearing unit with oil to ensure the bearing is being lubricated if a failed seal allows oil to leak.

In a grease lubricated bearing, the practice of overgreasing (grease purge) is a common method used to purge contaminants from the oil seal lip. In both scenarios, excessive lubrication can create other problems, not limited to increased costs from wasted lubrication, increased operating temperatures, and reduced efficiency due to the bearings rotating through increased volumes of grease or oil.

In some industries, oil or grease leaking outside of a system can also result in regulatory fines from. This issue can be mitigated with a bearing isolator, which provides a bidirectional sealing capability, both retaining lubrication and preventing ingress of contaminants into the system.

An oil seal requires constant contact with bearing lubrication to prevent a dry running condition of the seal lip. Starving an oil seal of lubrication can lead to several issues, including accelerated wear of the contact lip, added friction and heat in the equipment and shaft wear. These problems typically result in a user addressing the problem as mentioned above to prevent a bearing failure and avoid a shutdown.

Bearing isolators are a noncontact design, meaning there is no contact between a static surface of the seal assembly with the rotating shaft. This configuration allows the seal to operate in a dry condition, without the need for lubrication or additional maintenance schedules or the use of equipment such as automatic grease systems. The manufacturer-recommended lubrication levels can be followed, as the bearing isolator does not require lubrication contact during operation, and the external labyrinth will prevent contamination from entering the bearing. This can result in a maintenance-free seal assembly, reduced operating costs and cleaner operating conditions for rotating equipment.

While many variables can impact the performance and service life of a seal, equipment vibration and shaft misalignment can have a drastic impact. A misalignment of machine shafts between driving and driven components can result in driveline vibrations. Shaft misalignments (radial and axial) will typically result in a similar offset of the shaft, relative to the seal bore location. If the misalignment is severe enough, this can exacerbate wear of an oil seal. Most commercial lip seals can tolerate only a small amount of misalignment without affecting the contact of the seal lip and its ability to retain lubrication. Vibrations and misalignment can create an offset or localized pressure on the contact lip of the seal, resulting in lip abrasion, shaft surface wear and eventually lubrication loss.

When using a bearing isolator seal that is assembled with a unitized connection between the stator and rotor, misalignments and associated vibrations can be tolerated through designed labyrinth clearances within the seal assembly. The unitized assembly, incorporating a low-friction polytetrafluoroethylene (PTFE) connection component, allows free rotor rotation even when misalignments and vibrations exist. The unitized labyrinth design can account for radial and axial shaft movement, preventing unwanted contact between the stator and rotor. Other simple non-unitized labyrinth designs, assembled with O-rings between the stator and rotor, do not provide the required axial control of the rotor as unitized designs. This allows metallic components to contact during operation. Rotation and misalignment between the rotor and stator during operation can lead to generation of O-ring particulate and metal filings, and friction can create heat in the seal assembly. Also, a standard unitized labyrinth design could allow for increased shaft misalignment, and custom labyrinth design options can further increase these clearances within the seal assembly.

In certain styles of rotating machinery—primarily gearboxes—oil lubrication might fill into the seal cavity, per recommendation of the OEM. This fill level is not required to ensure lubrication to the seal but to guarantee that internal gearing and bearings are seeing adequate lubrication during operation. This recommended fill level can result in oil filling into the seal location, also known as a flooded condition. In flooded oil arrangements, a positive lip seal is required to prevent oil loss, as a traditional bearing isolator is configured with an open labyrinth path, which allows oil to leak. 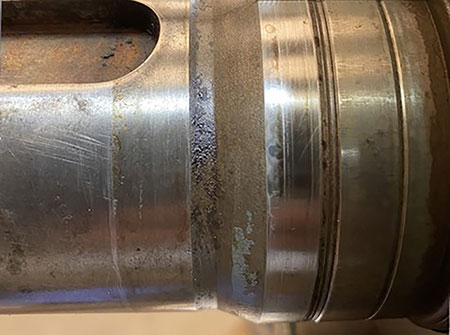 The user is not limited to using an oil seal in a flooded oil arrangement. They could also consider installing a flooded bearing isolator product to retain oil inside their system. A flooded bearing isolator will provide a noncontact seal design and is configured to avoid causing wear or grooving of the shaft surface. This type of seal design would incorporate a premium fluoroelastomer (FKM) oil seal element inside of the labyrinth, locating the contact lip of the seal element directly on an internal rotating surface of the seal, rather than directly on the shaft surface. By utilizing a flooded bearing isolator with a unitized Ingress Protection Rating 66 (IP66) rated labyrinth design and an FKM seal element, the internal oil lubrication levels will be retained inside the equipment while also preventing ingress of contaminants.

The combination of these features can result in a positive non-contact seal assembly that remains unaffected by external contamination and will not wear the equipment shaft surface. Testing has shown that a flooded bearing isolator, after incorporating an FKM seal element internally and a PTFE unitizing component, will provide a leak-free design in applications where increased radial shaft misalignment would otherwise create an issue for non-flooded designs.

The advantages of bearing isolators can be wide-ranging, and in many cases, end users can justify the cost. Using a bearing isolator can increase MTBF and eliminate the need for expensive repair or replacement of damaged shafts. The noncontact design can prevent future damage. Bearing isolator labyrinth seals can be configured to accommodate increased equipment misalignments and vibrations in rotating machinery. This can be beneficial, ultimately avoiding wear and equipment damage that affect efficiency, production and the bottom line.

Bearings
Aligning With Preventative Maintenance to Ensure Healthy Equipment
Proper procedures now can prevent problems later.
Bearings
Basics of Self-Aligning Ball Bearings
Learn advantages and disadvantages of this type of bearing and where they are best used.
Bearings
Advantages of an Automated, Wireless Approach to Condition Monitoring
Analysts can focus on bigger issues and spend less time on day-to-day maintenance.
Bearings
Understanding Back-to-Back & Face-to-Face Bearing Arrangements
See what happens when bearings are overloaded.
Bearings
Oil Quality of Motor Bearings
Rolling element bearings can be lubricated by grease or oil.