Some will know from their experience with automobiles that thicker oils, such as Society of Automotive Engineers (SAE) 30, are more appropriate for warm summer months. But thinner oils, perhaps SAE 10, can help prepare a vehicle for winter driving. Figure 1 illustrates where these motor oils fit in comparison to the industrial oil designations used today.

Thick oils are more viscous and may not readily flow into the bearings. Users can heat the oil or avoid oil rings and other risk-inducing lube application methods by using smarter means. They can use a jet of oil (oil spray) or convey the oil mixed with compressed air in the form of an oil fog—also called oil mist. Whatever the user chooses, he or she must guard against using the thinnest oil found on the market to avoid the problem of inadequate oil film strength and thickness.

The MRC Engineer's Handbook states, "In general, the oil viscosity should be about 100 Saybolt Universal Seconds (SUS) at the operating temperature."1 If for some reason a bearing was operating at 210 degrees F, Figure 1 would call for a lubricant with an International Organization for Standardization (ISO) viscosity grade (VG) somewhere between 220 and 320. But that is unrealistically thick for most process pump bearings. Oil rings, if used, would probably slow down and malfunction in such viscous oils. Oil overheating may be an additional concern. 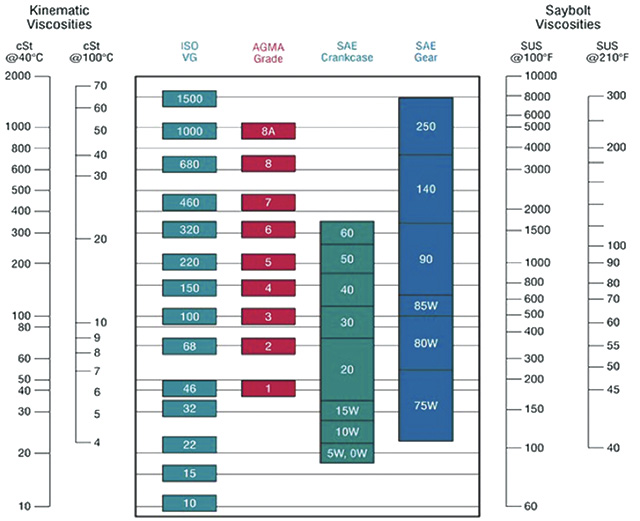 Figure 2 shows a graph from SKF that is time-tested and widely applicable.3, 4 It depicts the required minimum (rated) viscosity v1 as a function of bearing dimension and shaft speed.3 A bearing with a mean diameter of 390 millimeters (mm) at a shaft speed of 500 revolutions per minute (rpm) would require v1 = 13.2 centistokes (cSt). 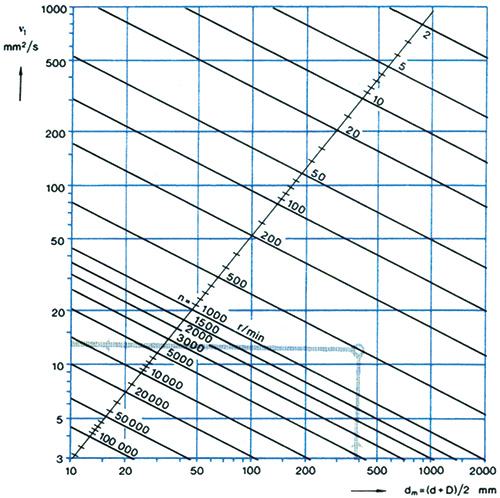 Figure 2. Required minimum (rated) viscosity v1 as a function of bearing dimension and shaft speed.3 A bearing with a mean diameter of 390 mm at a shaft speed of 500 r/min will require v1= 13.2 cSt. (Courtesy of SKF)

For another example, if a bearing was mounted on a 70-mm shaft rotating at 3,600 rpm, we might assume that the bearing's outside diameter (OD) is twice its inner diameter (ID), or 140 mm. The bearing's mean diameter would be 105 mm. To simplify, consider it 100 mm, and travel up from 100 to a location midway between the 3,000 and 5,000 rpm lines in Figure 2. In this instance, one could operate with a lubricant which, at the bearing operating temperature, is somewhere between 8 and 9 cSt.

Note that a bearing's operating temperature must be known to determine what ISO VG is needed. The operating temperature derives its combined thermal input from bearing load and lube oil frictional drag. Unnecessarily viscous oils will become hot. Figure 3 is helpful in this regard. Note that Figures 2 and 3 were drawn years ago and apply to mineral oils. If users choose premium grade synthetic oils, they will enjoy a sizeable safety factor in lube applications. 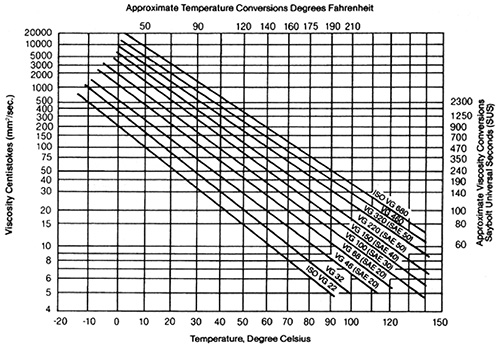 Figure 3. For a required viscosity (vertical scale), the permissible bearing operating temperatures (horizontal scale) increase as thicker oils are chosen (diagonal lines). Users enter the vertical scale near 9 cSt and move toward the right, where the line intersects with oils ranging from ISO VG 22 through ISO VG 320. If the user selects ISO VG 32, he or she might start the pump and verify that its oil temperature had leveled off at no greater than 75 C. Alternatively, the user might choose ISO VG 68 and verify that its operating temperature does not exceed 100 C (212 F). The information in this figure is per common rule of thumb, using average viscosity improvers. (Courtesy of the author)

Using lubricants with viscosities in excess of those needed may generate excess heat and actually work against operators. However, thicker oils have their place, and MRC had to cover all the bases with their 100 SUS rule-of-thumb.

With ISO VG 100 mineral oil, the oil-misted radial bearing ran a few degrees in temperature lower than it had with conventional sump and oil ring lube. The user was pleased but expressed disappointment at a triple-row thrust bearing running as hot as before—190 F.

A premium formulation synthetic ISO VG 32 would have been sufficient and would have given the user everything a solid reliability professional could have asked for.

Reliability professionals would like to see pump bearing housings with no oil rings, no need for constant level lubricators and few, if any, repeat failures. They start with the right lubricant.

Why, with all that, is the radial bearing cool? After all, it is also surrounded by the thick ISO VG 100. It is cool because it has no load. The load is in the triple-row thrust bearing, and that creates temperature in addition to the frictional temperature mentioned earlier in this article.