In modern industry, hundreds of millions of horizontal process pumps move fluids. The larger of these, typically pumps in ranges above 500 kilowatts (kW), incorporate sliding bearings. Except for a relatively small number of pumps with product lubrication or with exotic and expensive bearings, horizontal process pump bearings need oil lubrication.

Part 1 of this series dealt extensively with lubrication. Part 2 discusses lubrication matters but focuses on bearings and surprising findings on allowable bearing temperatures.

Figure 1 illustrates the extended temperature ranges available from modern synthetic lubricants. Properly formulated synthetic lubricants allow continuous operation at 400 degrees F (205 C). Although no rolling element bearings in process pumps are ever exposed to this temperature, it would be correct to point to the information conveyed by Figure 1. It supports the findings that premium synthetic formulations can be used with every bearing style or configuration found in process pumps. 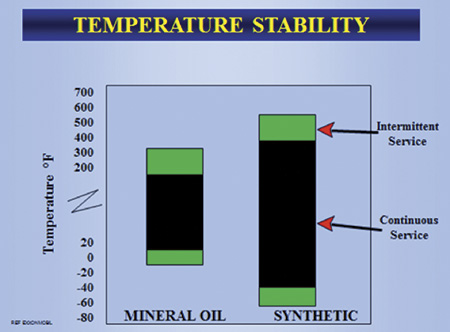 Figure 1. Temperature ranges of modern synthetics (Courtesy of the author)

Process pumps incorporate a radial bearing and a thrust bearing. A radial bearing is usually located near the mechanical seal, and the thrust bearing is fitted close to the drive end. Fluid pressures acting on impellers cause a net axial force on the shaft system, or axial thrust. In operation, thrust acts in one direction, which would make the two tandem-mounted bearings in Figure 2(a) suitable for thrust acting from right to left. If the bearings are precision-ground, they will share the load and each will carry 50 percent. If they are not precision ground, the configuration will create issues.

Expect the thrust action to briefly shift from the normally active to the opposite, or inactive, direction when process pumps are started and accelerating to operating speed. This concern favors using two angular contact thrust bearings mounted in back-to-back fashion, as depicted in Figure 2(b).

The back of an angular contact bearing is the wider outer ring land. The more narrow outer ring land is the face. Figure 2(c) is a face-to-face mounted set. If the inner ring became hotter than the outer ring, the resulting thermal growth would load up the bearing. This is one reason face-to-face bearings are rarely used in pumps.

Care must be taken at all times to prevent interference at the bearing and shoulder radii ra and rb. Also, precision-ground bearings are more expensive than bearings with more liberal manufacturing tolerances. However, after thinking through how the thrust bearing set in Figure 2(a) works, the end user will realize that with one bearing heavily loaded, the other one might be unloaded. When that happens, the unloaded bearing may skid and wipe the lubricant off the raceways. Metal-to-metal contact on the skidding bearing creates heat and accelerated bearing failure.

American Petroleum Institute (API) 610 asks for the contact angles in each bearing making up a set to be equal, which is why they are shown as equal in Figure 2(b). The API recommendation is influenced by the desire for standardization, by the economics of initial cost and by the desire to simplify training of technicians. Economics aside, two angular contact thrust bearings with equal load-carrying capacities are not necessarily best for pumps that briefly experience thrust reversal at startup. An unloaded bearing may accidentally skid while the rolling elements in the loaded bearing are rolling as intended. Skidding bearing elements tend to wipe off the oil film, which causes metal-to-metal contact. This contact can initiate failures and often manifests itself as high bearing temperature.

Special sets of back-to-back mounted thrust bearings may be a better choice in certain applications. These sets would use dissimilar angles. As an example, instead of the customary 40/40 degrees, a 40/15 or 29/15 degree design might be used to avoid skidding. Even an occasional set of triple-row bearings can be found in multi-stage pumps. Like Figure 2(b) and related sets, they must be carefully matched and precision-ground at all contacting faces and surfaces. 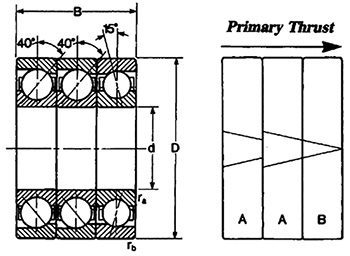 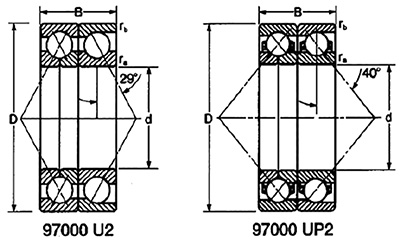 Among the many references linking bearing health and life expectancy, both in the plant and the field, Figure 4 stands out because of its general applicability. The illustration pertains to the thermal range of a typical rolling element bearing. Bearing metal temperature is often higher (10 to 25 C) than the oil temperature in the bearing within an oil circulation system. In non-circulating systems, bearing metal temperature is more likely 5 to 10 C higher.

The green zone in Figure 4 represents the optimum zone for bearing and lubrication temperature. Operating in the yellow zone will reduce lubricant and bearing life. If bearing temperatures are in the red zone, expect both the bearing and a mineral oil lubricant to be severely compromised. Pump bearing housing temperatures around 160 F are normal. This temperature is near the center of the green zone. Yet, bearing housing temperatures of 190 F are allowable and will likely occur in process pumps if an unnecessarily high oil viscosity is selected. Bearing manufacturer MRC states that its brand of rolling element bearings will run in continuous duty at a temperature of 121 C. Therefore, operating at 190 C, while perhaps wasteful if the oil is unnecessarily viscous, is permissible. However, be sure to add a personnel protection guard.

Of course, operating with a lower viscosity synthetic oil would be no problem. Operation with temperatures in the yellow zone can usually be avoided by switching to a lighter oil, preferably a premium grade synthetic. These lubricants remove more heat than equivalent grades of mineral oil. Synthetics run cooler, but they become hot if unnecessarily high viscosities are chosen.

Rolling element bearings will start degrading once a heat-treat-annealing temperature, probably slightly over 121 C (250 F), is exceeded. However, no process pump bearing housing designed or built by reputable manufacturers has ever come close to this temperature while properly lubricated with the required quantity and quality of lubricating oil. In a recent case, copious amounts of an excessively viscous lubricant applied as an oil mist leveled off and stabilized at 190 F.

A common misunderstanding is that the higher the lubricant viscosity, the better the bearing protection. That is far from correct, because rolling elements moving through thick oils at high speeds will generate considerable frictional heat. Using the correct viscosity lube is always important.

Lube application methods include grease, oil flooding, and oil rings or slinger discs used to bring lubricant from an oil sump into the bearing elements. Thousands of plant-wide oil mist systems have been in highly successful use since the early 1960s. As of 2015, an estimated 135,000 pumps and 26,000 electric motors are lubricated by oil mist. 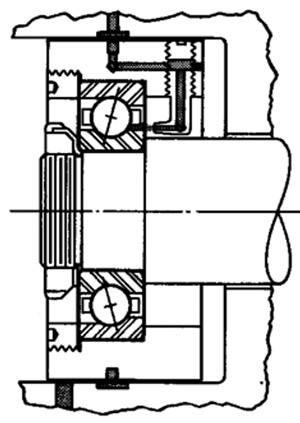 The oil jet is directed at the space between the outside diameter of the bearing inner ring and the bore of the cage.

Metallic cages are used because they have the highest allowable temperature capability. Means for scavenging the oil should be provided on both sides of the bearing. Allowing oil to collect and overheat in those spaces must be avoided. The oil system may be used to allow free axial floating of the bearing cartridge in the housing on a thin pressurized oil film. A clearance of 0.0005 to 0.0015 inches is typically recommended between the cartridge and the housing.

Reliability-focused users are generally disinclined to view process pumps with old style, failure-prone oil rings as reliable as pumps with circulating lube systems. More than 100 technical publications agree that oil rings are sensitive to shaft horizontality, depth of ring immersion in the oil, material selection, and machining and roundness parameters.

The lube application of Figure 6 will open a window of opportunity for reliability-focused users and innovative pump manufacturers. Think of a small oil pump, either internal to the process pump bearing housing or incorporated in a small assembly screwed into the bottom drain of your present process pump. This upgrade can provide filtration, metered flow, and proper pressure downstream of the oil sump and upstream of the spray nozzles. Motivated users have written this preferred lube application approach into their pump specifications and are actively pursuing this pump reliability enhancement.