Internal clearance is critical to bearing performance for multiple reasons. The amount of clearance influences the load distribution in a bearing, which ultimately affects its life. It also influences bearing running noise and vibration. In addition, it can influence whether the rolling elements move by rolling or sliding motion.

Normally, bearings are installed with an interference fit for either the inner or outer ring. This leads to expansion (inner ring) or contraction (outer ring), which causes a change in the internal clearance of the bearing after the assembly process. When the unit is running, the bearing's generic operating temperature may increase until it reaches a saturation temperature where the heat generation and heat rejection of the system are balanced. 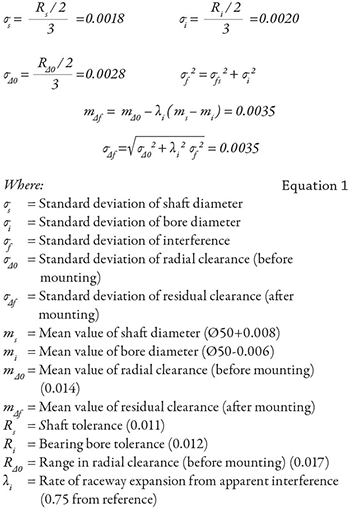 While we typically use this generic operating temperature for the entire bearing, the actual temperature of the inner ring, outer ring and rolling elements may vary significantly.

This temperature difference can cause changes in the internal clearance as shown in Image 1. In addition, when a bearing operates under load, an elastic deformation of the inner ring, outer ring and rolling elements also leads to a change in clearance. Quantifying all of these changes can make calculating bearing internal clearance a complex task. Following are definitions of types of clearances. 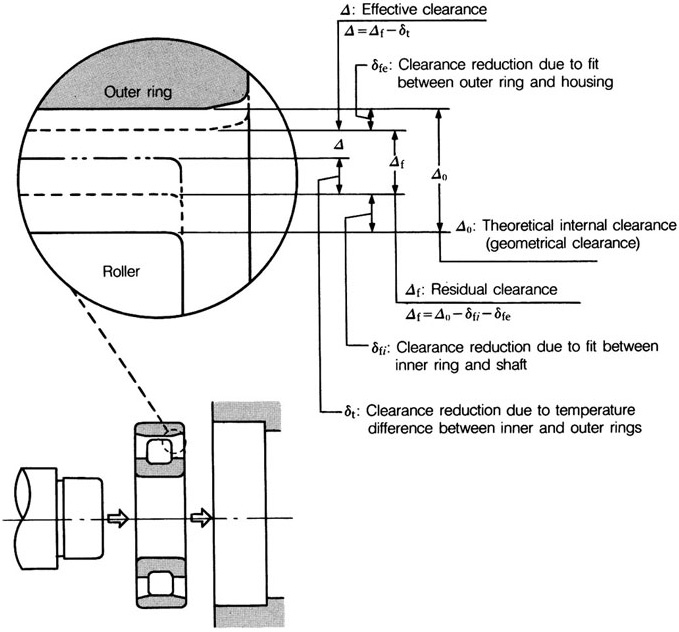 This is the internal clearance measured under a specified measuring load, and can be called “apparent clearance.” This clearance includes the elastic deformation (бFO) caused by the measuring load.

This is radial internal clearance, which is the measured clearance minus the elastic deformation caused by the measuring load.

бFO is significant for ball bearings, but not for roller bearings where it is assumed to be zero, and therefore ∆0 = ∆1

This is the bearing clearance that exists in a machine at its operating temperature, excluding the elastic deformation caused by load. This is the clearance when considering only the changes due to bearing fitting бf and temperature difference between the inner and outer rings бt. The basic load ratings of bearings apply only when the effective clearance ∆=0.

This is the actual clearance when a bearing is installed and running under load. Here, the effect of elastic deformation бF is included along with fitting and temperature. Generally, the operating clearance is not used in the calculation.

An example calculation is shown in Equation 1 for a 6310 single row deep groove ball bearing. The shaft tolerance used is K5, while the housing is H7. The interference fit is applied only to the inner ring.

Shaft diameter, bore size and radial clearance are the standard bearing measurements. Assuming that 99.7 percent of the parts are within tolerance, the mean value (m∆f) and standard deviation (σ∆f) of the internal clearance after mounting (residual clearance) can be calculated. Measurements are given in units of millimeters (mm).

The following equation is used to determine, within 99.7 percent probability, the variation in internal clearance after mounting (R∆f): 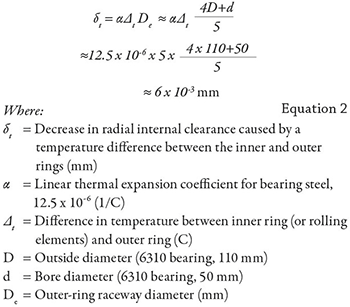 Using a 6310 bearing again as an example, the reduction in clearance caused by a temperature difference of 5 C between the inner and outer rings can be calculated using Equation 2.

Equation 3 is used to calculate the outer-ring raceway diameter. Using the values calculated for ∆f and бt, the effective internal clearance (∆) can be determined using the following Equation 4. 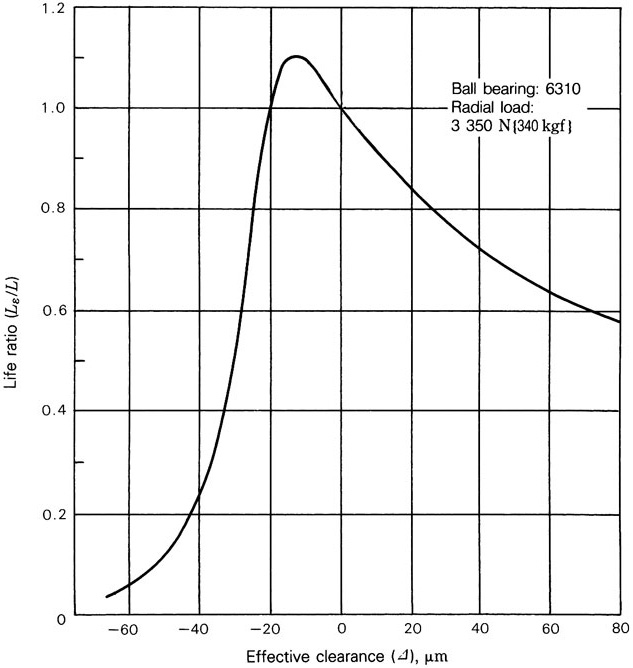 While targeting a slightly negative clearance is optimal for bearing life in theory, in practice one must be careful when designing or building a pump with the bearing in a preload condition.

As shown in Image 2, the Life Ratio does peak at -13 μm, but drops dramatically with additional preload. Incorrect assumptions regarding machining tolerances or operating temperatures can easily result in a shorter life than anticipated if the bearing becomes preloaded too heavily. On the other hand, too much clearance can result in bearing noise, rolling element skidding and poor pump performance. One must evaluate the trade-offs of clearance and bearing preload based on the needs of the application.

Todd Brewer is an application engineer with NSK. He is a graduate of Michigan Technological University with a Bachelor of Science in mechanical engineering. He has 18 years of engineering experience, 11 in the bearing industry and six years with NSK. For more information, visit nsk.com.