How to Properly Manage Piping Loads

These forces can have destructive effects if not carefully considered in piping design.
by Jack Claxton, P.E., Patterson Pump Company, A Gorman-Rupp Company
12/10/2015

In part 1 of this series (Pumps & Systems, November 2015, read it here), the effects of mechanical pipe strain forces and hydraulic pressure reaction forces were discussed. This article will cover thermal reaction forces as well as strategies to deal with these forces and some troubleshooting tips.

Thermal growth or contraction reaction forces typically involve those forces generated due to thermal expansion or contraction that occurs involving the change in temperature of the piping system from the ambient non-operating condition to the steady state operating temperature. Part of the procedure in such applications is determining what piping temperatures to use for the analyses, given the range of ambient air temperatures and pumped fluid temperatures. Exterior applications introduce the additional consideration of sun exposure and other weather effects. The effects of thermal movement can be difficult to analyze, yet lethal to a pump if not handled properly, in applications where such analyses are most applicable.

Linear pipe movement is illustrated by Equation 1. For the sake of illustration, consider a 10-foot length of steel pipe subjected to a 30 F gradient (see Equation 2).

If the end of the piping run opposite the pump is restrained, a fairly routine piping run and temperature gradient causes an axial deflection that well exceeds the 0.005-inch or 0.010-inch criterion used for the hydraulic pressure reaction force analysis that could also be considered good practice for thermal response analyses. Applications involving hot or cold liquids that are not properly engineered can easily distort and crack pump casings and cause other issues that are detrimental to pump life.

The interaction of the piping with the pump to produce deflection at the pump flange and impose nozzle loads works much the same as in the hydraulic pressure reaction force discussion in Part 1 of this series, except with thermal effects instead of a pressure force producing the deflection.

Orthogonal runs of piping can have similar effects as illustrated in the hydraulic pressure reaction force discussion, only with thermal effects instead of a pressure force producing the deflection.

The resulting deflection (dpipe) can be divided by the offset distance, as before. If this resultant is less than 0.001 inch per inch with a maximum of 0.010 inch when multiplied by the pump flange diameter, then the effect is equivalent to the flange parallelism criterion for mechanical pipe strain and hydraulic pressure reaction force effects and is, therefore, acceptable.

Simple calculation methods are presented here for the purpose of illustration.

Such analyses can consider the pump, pump support, and foundation properties to verify that the pump and piping interact in an acceptable manner. Transient loads can also be assessed through such methods, as well as performance under seismic loading, neither of which has been discussed here. Also, manufacturers of special fittings to solve certain piping problems can assist with specific design recommendations.

Be aware that there is a distinction between a pipe support and a restraint such as an anchor that prohibits movement axially as well as in other directions. Also, be aware that although it may be useful, in terms of simplifying assumption purposes, to consider a restraint rigid, in reality there will be some flexibility present.

It is important to understand how the characteristics of any special fittings used compare when subjected to loads from each of the three load sources discussed in this series. Often a fitting design handles loads from one or two sources well but introduces loads on the pump from another source when not applied properly.

For example, braided stainless steel flexible fittings work well in handling mechanical misalignment and thermally induced forces; however, some tests by the author on some randomly selected fittings indicate an ability to stretch up to approximately 1/4 of an inch when subjected to 100 pounds per square inch of pressure. This is not axially rigid, and some means to address the hydraulic pressure reaction force is needed when this type of fitting is used near a pump.

As another example, when using flexible mechanical grooved type couplings, be aware that they typically have some amount of linear movement capability, published by the manufacturer. This movement capability introduces axial flexibility up to some amount of deflection, but that amount is greater than the 0.005 to 0.010 inch range limit typically needed at the pump to avoid introducing a potentially excessive pressure reaction force on the pump, so this axial flexibility must be considered.

However, because of the relative weakness they introduce as compared with the axial rigidity of typical adjacent piping, these thrust rod designs are generally not acceptable for use in the vicinity of pumps, unless indicated by analysis to be adequate.

For example, studies by the author indicate the equivalent axial stiffness of the M11 thrust rod designs to be 1/4 to 1/3 of the equivalent axial stiffness of the recommended piping designs on which the thrust rods are used. The use of more rods or larger rods on fittings near pumps than recommended by the M11 manual is likely needed, and this is a suggested solution that can be examined by designers. More information on thrust rod designs is also contained in the Hydraulic Institute publication ANSI/HI 9.6.6, Pump Piping.

Tables 1 through 3 provide general guidance as to vulnerabilities and potential problem areas for some typical piping systems. This information is not provided as a substitution for considering all potential load sources for a particular installation.

First, consider the summary of how the three categories of pump loads discussed are generated, as shown in Table 1. Both approaches have advantages and disadvantages that must be carefully evaluated and managed to produce a satisfactory installation, without excessive piping loads being imposed on the pump. 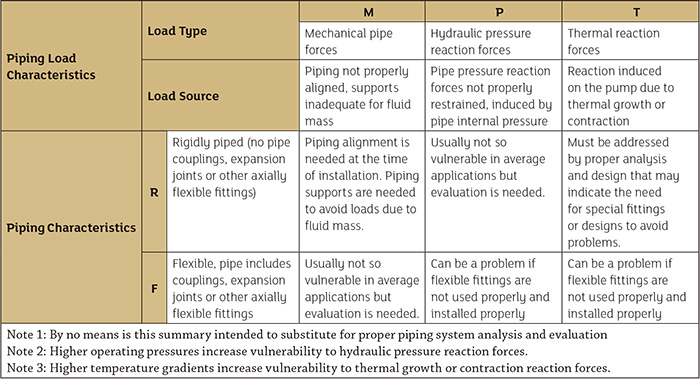 Typical trends to watch for and recommended precautions are shown in Table 3. Combining the tables above produces the generalized overall summary in Table 3.

Once a system is designed and in place, tests can be conducted to verify that the pump is not subjected to excessive loads from the three load sources discussed here. These procedures require the use of six dial indicators or, alternatively, the use of computer measurement machine (CMM) technology.

Note that the placement of the dial indicators should be done so as to assess movement relative to the foundation.

With the system (and pump) not operating and at ambient temperature, place dial indicators on the pump flanges (X, Y, and Z directions). Start the system and operate until the temperature reaches a stable normal operating temperature. If the movement exceeds 0.005 inches, there may be a problem that warrants further investigation.

With the pump not operating, place dial indicators on the pump flanges (X, Y and Z directions). Start the pump. If the movement exceeds 0.005 inches, there may be a problem that warrants  further investigation.

Jack Claxton, P.E., has been involved with pump engineering for Patterson Pump Company since his graduation from Georgia Tech. in 1975. He is currently vice president, engineering.