The fall has been a weather siege.

Hurricane Harvey pummeled Texas and left it covered in water and misery. Irma ripped through Puerto Rico and the islands, and poured floods across the Florida Keys. Maria, Jose and Katia left more devastation in their wakes.

Rescue workers came, police and fire and the U.S. National Guard. And so did the dewatering industry—an unheralded first responder—rushing to dry things out.

And help those suffering return to normalcy.

Harvey was only a Tropical Wave on Saturday, Aug. 19. It powered into a Category 4 before making landfall in Texas near Corpus Christi on Aug. 25, causing torrential rainfall and major flooding in Houston and the surrounding area.

“We didn’t have three weeks. It hopped up in the south part of the Gulf on a Monday. There wasn’t a whole lot of time to really prepare in the sense that you had a few weeks to know about it.”

Cloud is based in Grand Prairie, Texas, near Dallas-Fort Worth. Godwin has a branch in Houston, so employees also had to protect themselves, their families, and their own homes. Godwin received calls from the affected areas and, like its competitors in the pump industry, had to react. Their team set up a staging area in San Antonio.

“By Friday, we were getting a lot of calls in Corpus Christi and Houston,” Cloud said. “By Saturday morning, we had exhausted every bit of our dewatering pumps in Texas.” 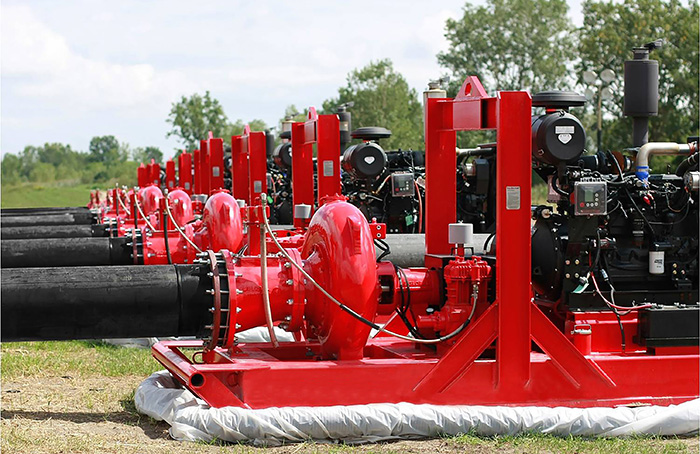 Godwin then had to rely on its national distributor network, and Cloud said that the company rented out an additional 100 pumps over normal business levels.

The most commonly used Godwin pumps were the 4-inch CD100M, 6-inch CD150M, 8-inch CD225M and 12-inch DPC300M. Internal Godwin pumps were shipped in from as far as Seattle, Los Angeles and Helena, Montana, Cloud said.

The reaction was similar at Global Pump, a Mersino company. President Gino Mersino sent word to his company in Davison, Michigan, that he was planning to visit Houston as the ensuing flooding hit the metro area harder than anticipated.

“We bet on the people needing help because we didn’t know what it was going to be,” Hollis said. “We got the first 15 trucks on the road immediately. As soon as the hurricane moved, we wanted to be ready.”

Anywhere there was water, there were pumps, Hollis said. Pumps were removing the water from parking garages and bypassing sewers and rivers. Another main goal was to dewater landfills and protect municipalities and refineries.

“If (refineries) don’t have backup fire protection, they have to shut down,” Cloud said. “It’s a safety precaution. If you have a lift station go down in a municipality, you’re going to have a sanitary sewer spill. You help them get backup collection systems up and running so they don’t have to.”

A total of about 60 to 80 pumps from Thompson were mobilized in Florida before the storm hit, and 50 more were added. Locating and distributing enough equipment was the biggest challenge following the storm. Perry said many of Florida’s municipalities are well-equipped and do a good job replenishing their fleet. 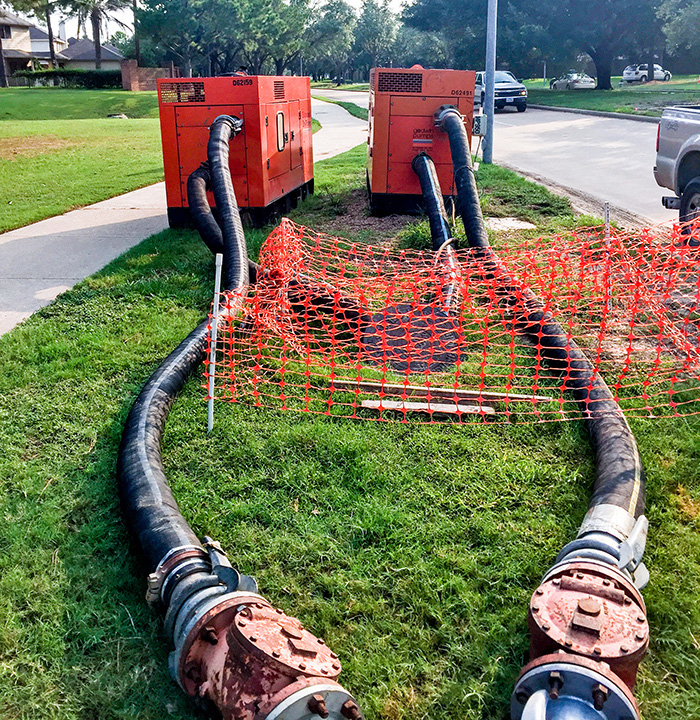 “You only have so much and you can only build it so fast,” Perry said. “As a manufacturer, we usually have the ability to address or meet a demand and build accordingly. When you have an emergency event, you have to scrounge for what you’ve got.”

He said that most municipalities requested trailer-mounted bypass pumps, including 4JSVM and 6JSVE model pumps with Silent Knight enclosures, which incorporate an oil-less vacuum technology priming system for maximum air handling capability and are high efficiency for reduced fuel consumption.

“Most requested bypass pumps have auto start/stop capability, so the pumps can be staged before the storm, and will operate automatically as the water level rises and shut down when the water level recedes,” Perry said.

“This allows municipal managers to protect their municipal field staff, and keep them safe at the EOC (Emergency Operations Center) until the storm passes.”

Others, including Xylem, were also there to supply pumps.

“We do what we can for everybody,” Perry said. “Unfortunately, (the supply) does run out.”

Even with little preparation time for these specific storms, companies work with municipalities ahead of time. Godwin has dri-prime backup systems installed in lift stations in Florida. The company provided backup pumping so that the lift station could operate during power outages.

Thompson also works with their clients to be ahead of impending weather.

Robin Barnes has worked in disaster recovery since the attacks of Sept. 11, 2001, and came to New Orleans in 2006. She joined Greater New Orleans Inc. in 2010 and now serves as executive vice-president and chief operations officer.

Hurricane Katrina devastated New Orleans in 2005, and torrential rainfall and flooding hit Baton Rouge last year. The state will always be in harm’s way based on its geography.

“Flooding is one of the challenges we have when we’re trying to convince businesses to stay in the region,” Barnes said. “We need to be very smart when we invest in flood protection.

“When we talk to Houston and other places, the discussion is how do you make smarter investments for the long term because there will always be another hurricane and another rain storm. Harvey hit below Houston. Houston really suffered from the rain that hit the city for a really long time.”

Barnes and her team look for solutions. New Orleans relies on pumps and drains to dewater, but that is costly and taxing on the system, she said. Levies keep the water out, but as, we know, they can break.

“Our suggestion is that we don’t think about keeping the water out, we think about how to store water and how to not just rely on (dewatering),” Barnes said “The goal is living with water and figuring out how to manage the storm water because it’s going to come back. You can build very expensive systems that can pump the water out and in some cases, you absolutely have to pump the water out. There’s no doubt about it. But there’s rain gardens, large-scale detention basins and permeable basins—these are all strategies for storing the water or slowing down the water.”