How to Use Lubrication Additives for Preventive Maintenance

This method with prevent varnish accumulation and reduce equipment downtime.
by Jim Carroll
12/30/2013

In today’s industrial world, going small can result in big savings. Hydraulic systems, for example, are getting smaller as part of a larger effort to improve fuel economy in industries across the board. The logic behind this is that a physically smaller hydraulic system weighs less, and that translates into greater fuel economy. However, such a size reduction is not accomplished without risks.

First, flow rates are increased relative to oil volumes as a result of less oil use. Issues related to oil residence, such as very short oil residence times because of the compact nature of the smaller systems, can lead to situations in which oil remains at elevated temperatures for extended periods of time. The reduced residence times also mean that the oil has insufficient time to cool to an ideal level. In some cases, temperatures as high as 266 F have been measured. This kind of heat can result in a high amount of oxidative and thermal stress on hydraulic oil.

Another undesirable effect from reduced residence times in the reservoir is that contaminants—such as foam, water and wear debris—are unable to settle. Instead, the contaminants remain suspended in the thermally stressed oil, causing it to break down and form varnish, a tacky substance.

Varnish can cause poor hydraulic valve response, which occurs because of sludge and varnish buildup. Varnish can also result in an increased need to replace blocked filters. When varnish forms, it creates a chain reaction within the hydraulic system, ultimately causing erratic operation, increased wear on valves and pumps, shorter oil life because of increased oxidation, less fuel efficiency and increased downtime.

When polymerized oil oxidation products and decomposition byproducts are produced as a result of thermal breakdown, varnish forms. Varnish is identified by its sticky brown appearance. It typically forms on pump housings, reservoirs and filters, and valve spools and bodies (see Image 1). 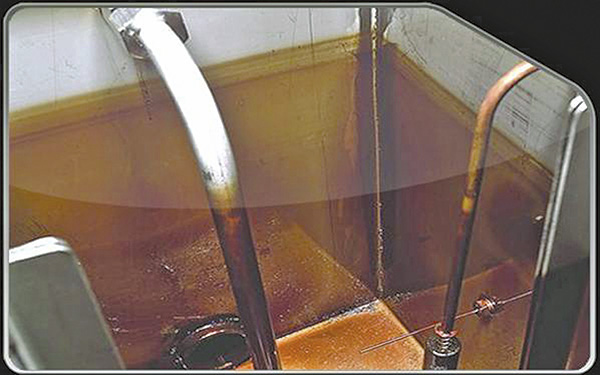 Image 1. Varnish coats the inner walls of a hydraulic fluid reservoir. Varnish deposits first appear as a soft, tacky brown coating on metal surfaces. If left untreated, it changes into a solid glaze that is difficult to remove.

Varnish is primarily composed of organic residues. As the hydraulic oil ages, more varnish is formed. This varnish can come in and out of solution with changes in temperature.

As the problem with varnish became more apparent, particularly in large turbines, one of the attempted solutions to prevent varnish (installing very fine filters to keep the oil cleaner) had the opposite effect and increased its formation. Varnish can form because of a high-temperature static discharge across high-flow filters. This phenomenon—called microdieseling—is caused by an implosion of entrained air bubbles, causing tremendous spikes in localized temperatures, some as high as 1,800 F. Such high temperatures can crack the oil molecule, generating auto-oxidation and creating varnish.

Varnish is polar, similar to many of the additives contained in hydraulic oils. The polar bonds present in varnish are attracted to metal surfaces—such as servo valves and pump components. As it coats metal surfaces, it prevents anti-wear additives in the oil from attaching to the metal. This results in increased wear on the engine and its metal components. Worse yet, the sticky-soft nature of the varnish attracts wear-causing debris and accelerates wear.

Why Is Varnish Bad?

Generally speaking, most operators realize that varnish has formed when the hydraulic actuator begins to operate erratically. The cylinder will appear to stick, but it is actually the spool in the valve body that is not operating freely. If operators are unaware of the cause of this sticking, they may inadvertently cause more equipment damage by calling for more flow than is needed.

Varnish increases friction, which negates any power savings that were gained by the smaller systems. Such friction also generates wear. Since varnish tends to attract and hold onto wear metals, friction and wear are increased. This wear can occur in the valves, the cylinders or the pump.

Until recently, operators and maintenance professionals only had two key prevention techniques to rely on to prevent/limit varnish formation:

The oil’s potential to form varnish can be tested and continually monitored throughout its life cycle. As mentioned earlier, the use of high-level filtration has been shown to increase varnish formation. The microdieseling that takes place during filtration not only causes varnish to form but also breaks down the oil and additives, leading to increased wear and erratic operation.

Fortunately, a number of additive systems have been developed in recent years that simultaneously clean existing varnish and prevent future vanish formation on the metal components of hydraulic systems.

For example, one oil manufacturing company’s specially formulated varnish cleaner was submitted to a test using a vane pump. The test was run for 1,000 hours to allow for the formation of varnish precursors in a typical mineral-based hydraulic fluid. A valve was taken from a field application and submitted for the study. It rated 5.5 on a scale of 1 to 10, in which 1 is dirtiest and 10 is cleanest.

The engineers administered the test and then added 20 percent by volume of the oil manufacturer’s product to the same fluid used in the 1,000-hour pump test and circulated this mixture at 140 F over that spool. The mixture of the used hydraulic fluid with the oil manufacturer’s cleaning agent added was allowed to circulate across the spool for seven hours. After seven hours, the spool received a near pristine rating of 9.5 (see Image 2). 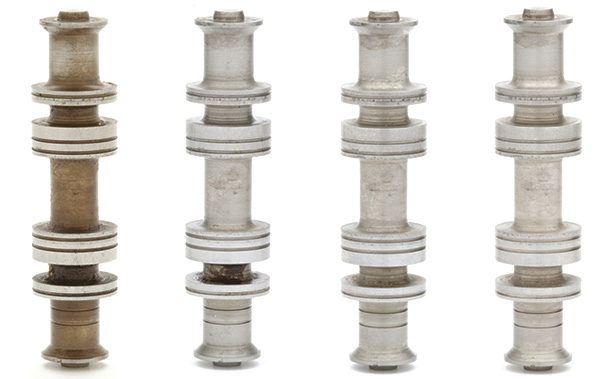 Image 2. This progression of photos shows a spool cleaned with a special varnish cleaning agent and rated over the course of its cleaning at 0, 1, 3 and 7 hours.

The same product was then introduced to a customer’s plastic injection molding machine. The equipment ran for 48 hours. Pictures of the results serve as a testament to the effectiveness of the cleaner in removing varnish (see Images 3 & 4).

Image 3. An injection molder main ramp pressure plate, before (left) and after (right) test and treatment

Image 4. An injection molder tank hatch door, before (left) and after (right) the test and treatment

To prove the effectiveness of this hydraulic fluid, a partner company submitted the oil manufacturer’s additive technology to the same vane pump test for an extended 1,000-hour interval in a pre-cleaned system. Conventional hydraulic oils began to show tenacious varnish at 500 hours, with varnish observed in both zinc and ashless oils. Comparisons between the performance of standard fluid technology and the oil manufacturer’s additive technology can be seen in Image 5.

In the standard vane pump test, which ran 150 hours (50 hours each for three different cartridges), a total weight loss of 90 milligrams (mg) on vanes and rings was allowed. Beyond that, the test failed. In the test run with the oil manufacturer’s additive-enhanced hydraulic fluid during a 1,000-hour period, vane loss measured 14 mg and ring loss an impressive 28 mg (a total of 42 mg). See Figure 1 for these test results. 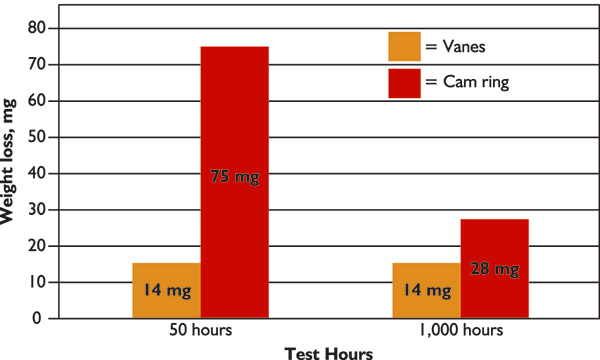 Figure 1. The results of the 1,000-hour vane pump test—the additive-enhanced hydraulic fluid exceeded the original equipment manufacturers’ requirements even after the test was extended 20 times longer than the normal limits.

Regardless of which hydraulic fluid or additive is selected, all treated hydraulic oils and fluids should be closely monitored for oxidation during service life. Tests such as total acid number, varnish potential index, remaining useful life evaluation routine method or the Fourier transform infrared spectroscopy method will indicate the health of the hydraulic system. These test results need to be trended over time, because a snapshot or a single sample does not provide a true picture of the system’s health.

While varnish can certainly cause problems for operators when left unchecked, avoiding the varnish and its related complications is possible through a combination of vigilant monitoring and using cleaning agents and additives. Such preventive maintenance can eliminate varnish and sludge problems in treated systems and provide resistance to future oxidation. Taking proactive steps will help ensure longer oil life, extended system component life and reduced equipment downtime and maintenance costs for treated hydraulic systems and components—all of which can go a long way toward reversing the trend of rising stress levels in increasingly smaller hydraulic systems.

Jim Carroll is vice president of Technical Services for Schaeffer Manufacturing. He may be contacted at jimcarroll@schaefferoil.com. For more information about Schaeffer, visit www.schaefferoil.com.