This equipment exploits the elasticity of synthetic rubber and ensures stable bearing behavior.
by Fumitaka Kikkawa
by Yoshimasa Kachu
by Hiroshi Satoh
08/17/2015

After 30 years of research, an engineering team in Japan has developed a hybrid-type submersible bearing that prevents burnouts during vertical pump dry-starts, exploits the elasticity of the synthetic rubber to level the pressure during typical operation, and ensures stable bearing behavior by conferring vibration control while supporting the rotating shafts.

Using polytetrafluoroethylene (PTFE) strips as slide members and synthetic soft rubber for cushioning between the slide elements and metal shell (or the base plates), the hybrid bearing can be used for dry-start operation of vertical pumps without applying lubricating water from the outside prior to pump operation.

Advantages of Adopting a Dry-Start Bearing

A wet-start vertical pump system requires that water be injected from outside the pump into shaft protection tubes at the top of the column pipes before operation. In most cases, the water is pumped up automatically after a fixed time to avoid wasting the feed water pump power or the water from the tap, which is usually called self-feed water. A dry-start pump does not require lubrication and is less prone to environmental damage from crevice corrosion in joint parts where seawater remains. Because the stainless steel shafts are exposed directly to the pump main flow, pitting corrosion—prone to occur in low-flow-velocity or stagnant regions—is reduced.

Three molds have been developed to produce three types of bearings, each suitable for a different range and scale of application. These include full-molded, segmental and barrel type bearings.

Bearings are basically composed of four layers: PTFE strips as slide elements, synthetic rubber for cushioning, base plates as the backing-plates and a metal shell that serves as the holder. The full-molded bearing is used almost exclusively for vertical pumps, making a simple, three-layered structure as shown in Figure 1. 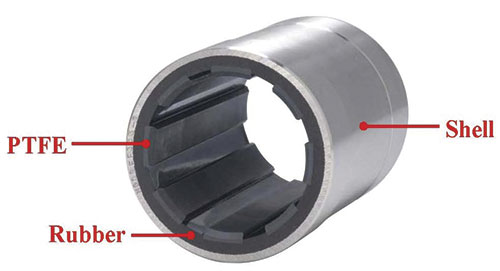 Figure 1. PTFE/rubber hybrid bearings for pumps (Images and graphics courtesy of the authors) 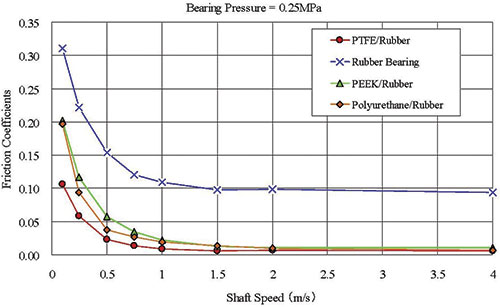 The graph plots one of the outcomes obtained by changing the bearing loads from 0.25 to 1.0 mega-Pascals (MPa) at four stages. Results show that all bearing materials have excellent friction coefficients.

Friction coefficients obtained using the two test bearings during wear resistance testing indicate that the test bearing with the persistently soft rubber layer (72 Shore A hardness) has a lower friction coefficient than the bearing with the rubber layer turned into ebonite (80 Shore D hardness). This suggests that the rubber layer may prevent sharp rises in the local pressure on the bearing conferred by the shaft deflection. The rubber seems to keep pressure low overall and limit the solid contact friction areas.

The free surfaces of the rubber made by or among the PTFE strips may improve the elastic effect compared with the bearings without free surfaces facing the shaft, as with a the bearing with a monolithic ring-like structure of metal and resin.1 The balance between the number of grooves and the size of the area in which the water film formed to lower the friction coefficients is important. If the number of grooves is increased to enhance the elasticity of the rubber, the size of the water film area will decrease and invite the larger friction coefficients and vice versa.

Because the pump shafts of the vertical pumps are suspended on the center of the column pipes, the bearing load by the shaft weight is comparatively small, which is typical with vertical pumps. This reduces the importance of self-alignment, but another problem may emerge.

Wear resistance related to adhesive wear and the abrasive wear of the slide members is an important factor for submerged bearings from the viewpoint of tribology. Figure 3 shows the results of an adhesive wear test on two pieces of same-sized bearings. One was the PTFE and rubber hybrid bearing, while the other contained abundant sulfur and was vulcanized to harden the rubber into ebonite with the hardness of 80 Shore D. 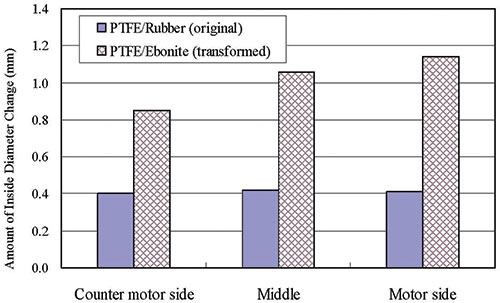 In addition to the effect on friction coefficients, the rubber layer also affects shaft vibration control. A viscoelastic material like rubber suppresses the self-excited or sub-synchronous vibration that is caused by the strong nonlinearity of the bearing characteristics and tends to appear when loads are small, as in the case of the shafts of vertical pumps.

Figure 4 shows the peak-to-peak amplitude measured on a bearing spider fixed on the middle part between the column pipes of the test pump in operation. The inside radiating spokes holding the bearing in the shaft center were replaced with rods extruded from the load cells to measure the bearing load. This pump was 6 meters long under the floor. A 200-millimeter bored vertical pseudo-pump with three bearings (upper, middle and lower) was fixed in the bearing spiders. The impeller of this pseudo-pump was replaced by a rotating disk with the same rotating inertia to cease its pumping action. 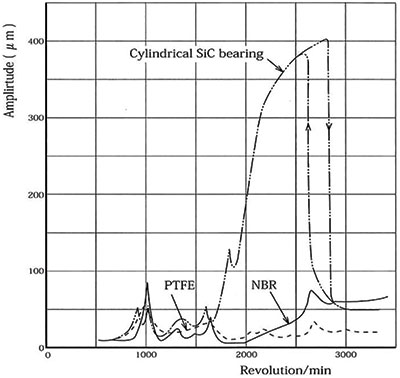 The amplitude curves shown in Figure 4 compare the three kinds of bearings (PTFE/rubber hybrid, nitrile rubber [NBR] and cylindrical silicon carbide [SiC] bearing). Rotation speed was continuously altered throughout the test, and the loads on each bearing, as well as the vibration amplitude, were traced.

Only the cylindrical SiC bearings generated a self-excited vibration accompanied by the hysteresis phenomena. The PTFE/rubber hybrid bearings ran quietly through the full range of rotational speeds. Once excessive vibration is generated with the use of SiC bearings, an abnormal noise occurs, and the loads on both upper and middle bearings can increase by as much as tenfold.2 These phenomena were often observed in real pumps in factory tests and in the field.

Based on these findings, the rubber layer improves the damping performance of the pump system and weakens the nonlinearity of the bearing spring constant because of the viscoelastic nature of the rubber. The actions differ markedly from the actions of the monolithically structured metal/resin without rubber lining effects. Once a vibration like sub-synchronous resonance is generated, pump parts such as the shaft might fracture. Even if the consequences are not severe, the abnormally raised bearing loads will result in extreme wear of the bearings. 2 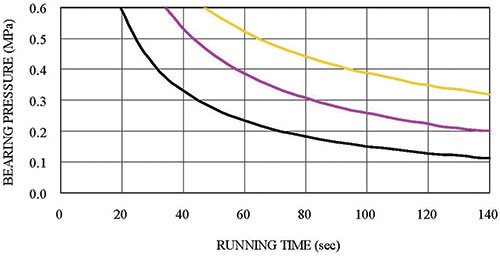 Under the ordinary usage requirements for vertical pumps, the period of in-the-air operations using the dry-start bearings at the point of pump startup is 10 seconds or less. Therefore, Figure 5 shows that almost all of the vertical pumps are capable of dry start.3

Acceptability of a Lack of Lubrication Water

A lack of lubrication water arises when some force or phenomenon intercepts the flow of replacement water to or from the bearing surroundings.

Assuming a cutoff of the passage of lubricating water to and from the bearing, the test bearing was sealed in an experiment using the oil seals at both ends after immersion in water. The bearing temperature was measured in the vicinity of the bearing surface. 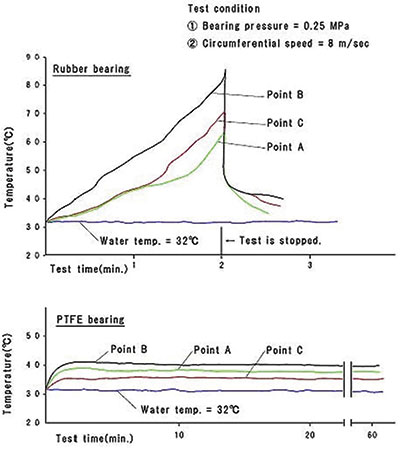 Figure 6 shows the temperature change of the test bearings during the experiment. Points A, B and C in the figure are temperature measurement points. Point B is at the middle of the longitudinal location of the bearings, and points A and C are at the two ends. When the inflow and outflow of lubrication water is blocked, the rubber bearings are at high risk of seizure. For hybrid bearings, the risk exists only when the bearing surfaces get wet.4

Dr. Fumitaka Kikkawa is a director of Mikasa Corp. and oversees the industrial products division. Dr. Kikkawa earned a Ph.D. in engineering from Nagasaki University with a focus on submersible bearings for pumps and ships. He may be reached at kikkawa@mikasasports.co.jp.

Yoshimasa Kachu is a graduate of the chemical engineering program at Fukuoka University. He is one of the chief engineers in the industrial products division at Mikasa Corp. He may be reached at kachu@mikasasports.co.jp.

Dr. Hiroshi Satoh has been engaged for the last seven years as a consultant in mechanical engineering at several companies, including Mikasa. He received a Ph.D. in engineering from Yamanashi University. He may be reached at oridea-satoh@ab.thn.ne.jp.