Productivity targets are a key performance measure in any process industry and the refining business is no exception. Increasing output from a large refinery to meet market demand presents challenges. However, dealing with the pumps does not need to be one of them.

Due to changes in government regulations over the past several years, the demand for ultra-low sulfur diesel (ULSD) has increased. As a result, refineries across the country have been forced to adapt and find innovative solutions to meet increasing capacity. A refinery in Texas found itself in this situation and began investigating possible solutions with the help of a service center.

The two pumps of interest were 6 x 8 x 10.5 BB5 10 stage units in diesel charge service. The American Petroleum Institute (API) BB5 is a barrel pump that encloses a multistage axial split inner bundle with an opposed impeller configuration (Image 1). Being that the pressure boundary is radially split, these pumps are typically designed for high-temperature and/or high-pressure applications. With the capability of handling pressures and temperatures up to 6,250 pounds per square inch (psi) and 800 F respectively, the API BB5 can be suitable for applications such as water injection, oil export, boiler feed and charge service.

The subject pumps were originally sold in 2006 at a rated point of 1,110 gallons per minute (gpm) at 4,014 feet. With the change in ULSD demand, the reliability engineers at the refinery wanted to increase the capacity to 1,628 gpm at 3,450 feet (Image 2). The goal was to find the most economical and timely solution to meet the needs of the refinery. 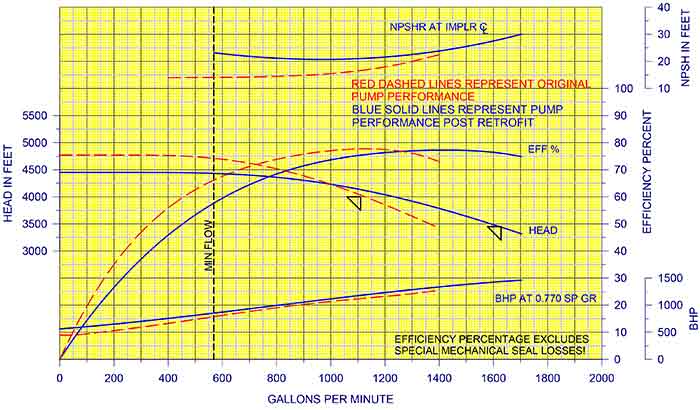 When in this situation, there are three possible options:

Each of these options have advantages and disadvantages. For example, parallel operation would be the least costly to achieve the increase in flow.

However, the lack of system redundancy in the event of a failure is risky and can often be costly in terms of lost production.

A new pump selection to fit the application could be advantageous with regards to efficiency. But long lead times, the cost to reroute pipework, and baseplate or foundation modifications may make this option less attractive.

If re-rating pumps, the desired performance may not be achievable in the given frame size. But if feasible, re-rating can often be quicker and more economical.

Based on the criticality of this service for the overall success of the refinery operations, the possibility of re-rating was of great interest.

Engineers conducted a thorough feasibility study both hydraulically and mechanically to determine whether the goal was possible. A specific speed (Ns) based search revealed an existing proven design that would meet the refinery’s needs—provided the impellers were able to physically fit, and the inner-case volute nozzle areas could be increased enough to allow the impeller to meet as-designed performance. A review of the volute development drawings provided confidence that both items could be fulfilled.

The approach was to keep it simple:

Ideally, a factory test would have been performed after completing this work, but unfortunately, the project’s timeline did not make this possible. It was important that the proposed upgrade was supported by internal empirical data and experience to provide confidence in the accuracy of the proposed design changes. It was necessary that the predicted impeller trim was calculated correctly on the first attempt.

With an array of impeller hydraulic designs available, engineers were able to select an existing design that would meet the new desired head and capacity of the application. 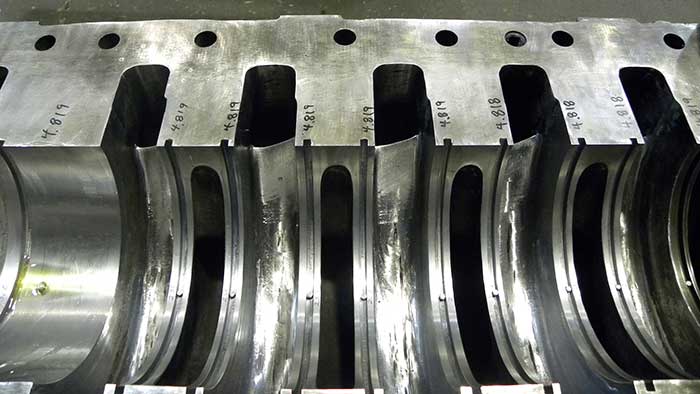 A mechanical cutback was done (see Image 3) to achieve both an increase in nozzle area and lip diameter. Based on empirical data, the increase in nozzle area would allow the new impeller selection to run out in flow to the new design point. The increase in volute lip diameter enabled sufficient lip clearance. This, and the fact that the cutback was angled, helped with the reduction of vane pass pulsations and overall vibration amplitudes. The outlet vanes of the impeller were underfiled to increase the outlet area between vanes (OABV) and help flatten the performance curve. This also pushed the best efficiency point (BEP) to achieve higher flows.

The new performance level did not require all 10 stages. One stage was removed so that the impeller trim could be near full diameter. This benefitted both the efficiency and the BEP location for the pump. With the stage reduction, the effect on axial thrust direction and magnitude was analyzed. The internal bushings were resized to ensure the axial load was acceptable for the thrust bearing.

With a major re-rate such as this, it can be difficult to fit a new, relatively large, high-capacity impeller within the existing volute.

This is because multistage pumps are designed with the shortest possible stage spacing to limit overall pump length.

Fortunately, the pumps in this example were originally equipped with a relatively low-flow rotor compared to its frame size, which offered more room to work. To accommodate the increased impeller outlet width, the volute side walls required widening or “slabbing” to ensure adequate side-room clearance, which is critical to centrifugal pumps.

The increased pump performance required more power than the original 1,250-horsepower (hp) motor could deliver, so a new motor was acquired to meet this demand. However, no baseplate modifications were required as the frame size for the higher rated motor remained the same.

The decision to re-rate the existing pumps rather than buying new was highly advantageous for the refinery. The re-rating project was more economical, especially since the outer barrel alone can be a high-priced component.

The re-rate required no changes to the footprint of the existing pump, saving valuable time in completing the project. If a new pump had been specified, baseplate modifications and rerouting of suction and discharge pipework may have been required.

The hydraulic modifications were all confined to the inner bundle, allowing the outer barrel to remain piped up in the refinery. This improved the overall delivery time for the project. 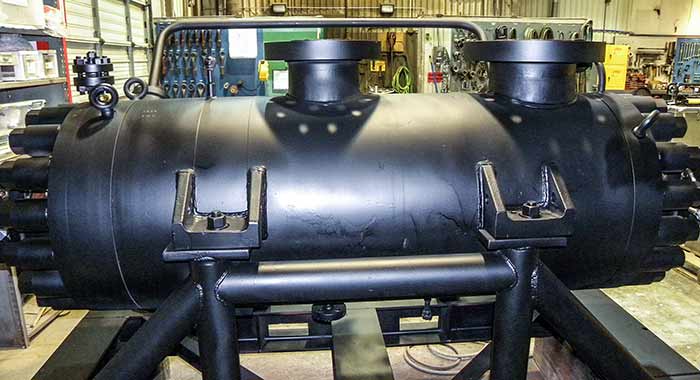 Once complete (Image 4), the pump was reinstalled and ran well. In fact, the pump had slightly outperformed what was proposed. Both the vibration levels and bearing temperatures were well within the acceptable limits.

The final benefit: The payback period for the cost of this project was achieved in 35 days.