The Impact of AC Motor Efficiency

In 2011, I wrote a five-part series on alternating current (AC) motors and motor efficiency. This column will go into more detail about the impact of efficiency.

The second largest loss (20 percent) is rotor resistance loss (rotor I2R). Larger rotor bars will lower resistance and, therefore, reduce these losses. One reason that premium-efficient motors are more expensive than lower efficiency models is the increase of copper in the stator and new rotor designs that allow larger rotor bars.

The third largest loss (19 percent) is core loss. Core losses—composed of hysteresis and eddy currents—are a result of the continuously changing magnetic field in the steel laminations of the stator and rotor. Using higher quality steel can reduce hysteresis losses, while eddy current losses are decreased by using thinner and better insulated laminations. Lengthening the lamination stack will also reduce core losses by reducing the flux density within the stack. These improvements add to the cost of premium efficiency motors.

The fourth largest loss (18 percent) is stray load loss. These losses usually increase with the motor load and can be reduced through proper motor design.

Coming in last (13 percent) are friction and windage losses. Friction is caused by friction in the ball or roller bearings, and little can be done to increase bearing efficiency. Windage is a combination of the drag produced by the spinning rotor and the internal or external cooling fan. Fans are sized to meet a motor’s cooling requirements at the lowest possible energy requirement. 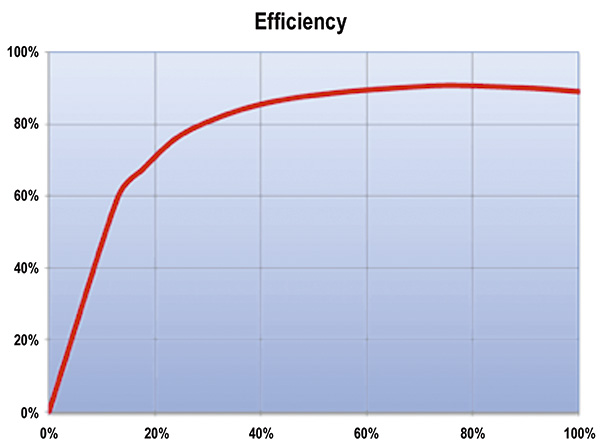 The Effect of EPACT and EISA

The Energy Policy Act (EPACT) that was introduced in 1992 set a minimum efficiency (EPACT Efficiency) for T-frame motors from 1 to 200 horsepower operating at 1,200 rpm to 3,600 rpm. These efficiencies were detailed in National Electrical Manufacturers Association (NEMA) MG1, Table 12-11. This law did not apply to lower speed motors, those above 250 horsepower and several “general purpose” designs. Also, the mandate was not enforceable until October 1997. Premium (higher) efficiency motors were available from some manufacturers, but they were not required.

In 2010, EPAC was replaced by the Energy Independence and Security Act (EISA). This law stated that all T-Frame motors from 1 to 200 horsepower operating from 1,200 rpm to 3,600 rpm must meet the premium efficiencies detailed in NEMA MG1, Table 12-12. General purpose motors up to 500 horsepower and 900 rpm that were exempted from EPACT are now required to meet the EPACT efficiencies outlined in NEMA MG1, Table 12-11. Many T-frame motors, 200 horsepower and larger, already meet the efficiencies shown in Table 12-12. Prior to EPACT, the typical efficiency of a 10-horsepower, 1,200-rpm motor was about 87.5 percent. EPACT raised it to 90.2 percent, and EISA increased it to 91.7 percent.

Higher motor efficiency is good because the cost of electricity will continue to increase. However, higher efficiency motors have little impact if pumps operate off their best-efficiency-point (BEP) flows. Remember that the total efficiency of a pump and motor is the product of their individual efficiencies. A centrifugal pump should always operate as close to BEP as possible.

The synchronous speed of a four-pole motor is 1,800 rpm. This is the speed at which the magnetic field rotates about the stator. The actual rotational speed of the rotor (slip speed) will always be less. The actual slip speed depends on the design. Because of the design characteristics of premium-efficiency motors, their slip speed will be higher than most motors produced prior to EISA. Usually, this is not a problem, but in some applications, it should be considered. For example, if a pump is tested in the factory at 1,725 rpm and it operates at 1,760 rpm, the speed increase is only 2 percent. However, because horsepower varies as the cube of the change in speed, it could increase by 6 percent. Slip speed is also sensitive to the terminal voltage. It increases with an increase in voltage and decreases with a drop in voltage.

As a final note, three-phase voltage unbalance reduces both insulation life and motor efficiency. An unbalance of only 2 percent can reduce the useful life by 50 percent and efficiency by 2 percent. Testing for voltage unbalance, finding the cause and fixing it are important. If not, you probably will not be able to benefit from improved nameplate efficiency.

Joe Evans is responsible for customer and employee education at PumpTech Inc., a pump and packaged system manufacturer and distributor with branches throughout the Pacific Northwest. He can be reached via his website, www.PumpEd101.com. If there are topics that you would like to see discussed in future columns, drop him an email.