The Importance of Using Thread Lubricants in Bolted Connections

In any industrial plant, there can be thousands of bolted connections, primarily in the flanged connections throughout piping systems, on packed stuffing boxes on pumps and valves, and on heat exchanger covers, for example. All of these pieces of equipment are used to join components while maintaining a leak tight pressure boundary for a system. These systems can operate under high pressures, high temperatures and in dangerous chemicals, and a failure of a bolted joint can lead to an extreme hazard for personnel. 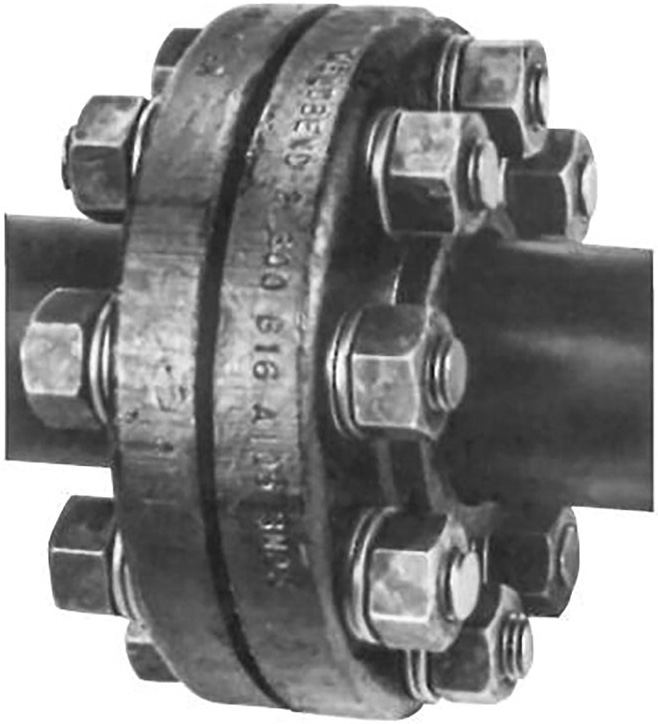 At first glance, a bolted joint looks pretty straightforward. Image 1 shows a basic bolted flange assembly used to join sections of pipe together. The flanges typically have a gasket installed between them that must be compressed in order to create a tight seal in the assembly. The bolts provide a means of applying compression force to the gasket. The mechanic tightens (turns) the bolts on the flange with a wrench, and that applied torque translates to a force that clamps the flanges together, thus compressing the gasket.

But a bolted joint is a little more complicated than it looks. The gasket requires a specific amount of compression to create and maintain a seal, and there are myriad gasket types available in the marketplace, each with different characteristics and required compression stress to seal properly.

The bolts can be made with different materials, strengths, finishes, thread designs and fits. Regardless of all of these variables, there is one key requirement: Compress the gasket with the correct stress required to create a tight seal between the flanges, and maintain it throughout its service life.

There are many ways a bolted joint can be tightened accurately. The most common method is manually tightening the bolts on the flange using a torque wrench. Many variables other than friction can affect the accuracy of the achieved bolt load for a given torque value, including thread fits and finishes, the tools used and the mechanic’s ability. This article will focus on just one major variable: friction. This is where the subject of lubricants comes in.

To achieve correct gasket stress the bolts need to be tightened to the correct torque. There is a basic formula used to calculate the torque required to achieve a specific load. Note that the load per bolt for the flange assembly is determined by dividing the required gasket stress by the gasket surface area. 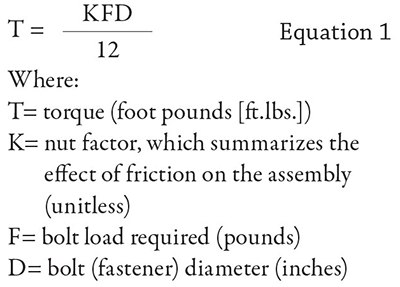 That resulting load on the gasket is then divided by the number of bolts on the flange to determine the load per bolt. Then the torque needed to achieve the required load per bolt is determined with the formula in Equation 1.

The bolt load and bolt diameter are clearly defined parameters. The K value is a bit different. This is a theoretical number that represents the friction in the bolted assembly. It is ideally determined by testing the actual bolted assembly (i.e., each bolt or nut assembly), but in many cases, the value used is the K value supplied by the bolt lube vendor. 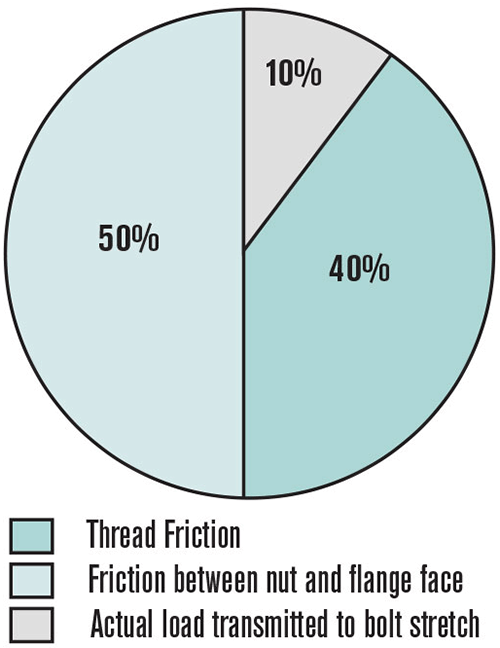 Friction has a tremendous impact on bolted assemblies. As shown in Image 2, a small portion of the applied torque (roughly 10 percent) actually results in useable bolt load available that ends up applied to the gasket; a majority of that torque is consumed by friction between the threads of the stud or bolt and nut or blind hole, and the flange surface under the head of the bolt or nut. That value of useable bolt force can be increased using a more effective lubricant with a lower K factor, which reduces the overall friction effect on the assembly.

Table 1 shows a basic calculation example for a single 3/4-inch, UNC, B7 stud/nut assembly that is torqued to a value of 200 foot pounds. In typical bolt torque tables, a K factor of 0.2 is frequently given as a value for alloy steel assemblies with no lube. The resulting bolt load using that K factor provides 16,000 pounds of bolt load. If a lube with a lower K factor is used, and the same torque is applied, the bolt load increases 25 percent to 20,000 pounds. If the K factor is actually higher than 0.2, which is definitely possible, the actual bolt load at the target torque can be considerably less than that required to achieve the proper gasket stress in the flange.

Using a generic K factor in this calculation can create problems without anyone being aware of them. If the actual bolt load is higher than the target value, that could cause yielding of the bolts or damaging the gasket. If the actual bolt load is too low, that could cause leakage of a gasketed assembly creating a hazardous situation. Using a reported K factor for a specific lubricant can help. 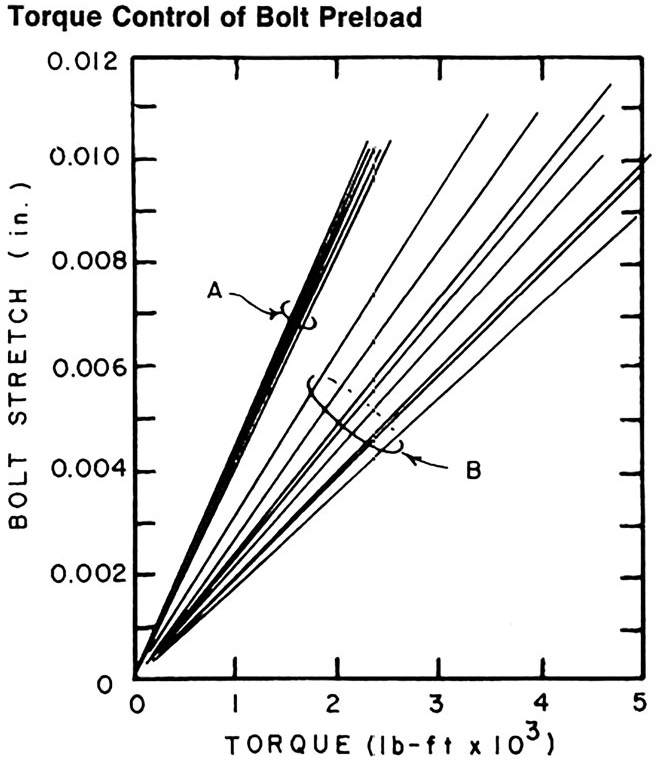 Image 3. Consistency of applied load with a lubricated (A) versus nonlubricated (B) assembly (Image credit: Bickford. (1995), An Introduction to the Design and Behavior of Bolted Joints, New York, NY: Marcel Dekker)

Lubricants provide better accuracy and consistency in loading bolts in a flange assembly. Image 3 shows the difference in bolt stretch (which corresponds to the applied load) for a series of lubricated studs (A) versus clean, dry studs with no lubricant used (B). The bolt size used is a 2 1/4-inch bolt, 12 inches long, B6 Grade.

There is more consistency with the lubricated studs than the dry ones. In a flanged assembly with eight bolts, this improved accuracy helps ensure the applied stress on the gasket is equally distributed across its entire area. This accuracy may drop off at higher loads depending on the quality of the lube. Some lubes are designed to provide good lubrication under high loads (i.e., a high quality anti-seizes) while others are low friction at low loads but break down at the higher stresses resulting in greater variability in multiple assemblies. This can cause inconsistency in the bolt load, or in the worst case, galling of the threads resulting in none of the applied torque results in bolt load.

But even if the designer has selected a quality thread lubricant, there are a few other things to consider.

First, is the joint a one-time assembly, or is it assembled and disassembled repeatedly or adjusted during service? If the latter, the best option would be a quality anti-seize with good lubrication properties that prevents galling after the assembly has been in service for a period of time (often at elevated temperatures, which may break down the base lube). The highest quality products in this category can still provide a consistent—typically higher—K factor even after the base lube has broken down.

Second, the lubricant should be compatible with the media being sealed or the atmosphere in which the bolted joint resides.

Lastly, in systems monitored for emissions compliance, some lubes may emit volatile organic compounds (VOCs) at high temperatures that may result in a false positive. The monitoring equipment may indicate a VOC leak from a flange, when in fact it is the lube off-gassing.

Phil Mahoney is a principal managing engineer in the subject matter expert services group for the A.W. Chesterton Company. His primary focus is stationary equipment sealing. Mahoney is the president of the Fluid Sealing Association, and he has been active in FSA since 2004.

Seals
Fugitive Emission Testing of Flange Gaskets
Examining the standards that guide gasket testing.
Seals
How to Contain Mixers & Agitators
Air seals prevent powder and slurry leakage in safety-focused and harsh industries.
Seals
Influence of Bearing & Seal Characteristics on Pump Vibrations
Understand the process of evaluating bearing and seal hydrodynamic and mechanical characteristics, as well as its modeling, in the frame of rotor dynamics analysis.
Seals
Ensure Pump Reliability Is Inbuilt, Not Just an Afterthought
Select sealing systems that ensure reliability, sustainability and cost-efficiency are built into pumps and processes at the outset.
Seals
Why You Need Strong Seals in Harsh Applications
Protecting equipment and the environment requires adequately sealing the process and lubricant.