Air operated double diaphragm (AODD) pump technology was invented and introduced to the market 55 years ago. That day in 1955 when the first AODD pump began operating remains a watershed moment in industrial pump history. AODD technology grew from humble beginnings, mainly as a way to pump wastewater in mining applications.

AODD pumps have many strengths. They do not require electricity, are self-priming, can pump fluids with solids in suspension (rocks and debris), can run dry or be "dead headed" without damaging the pump. In addition, their performance can be tailored to specific needs by adjusting the inlet air pressure or restricting the discharge of the pump. AODD pumps were designed to operate in rugged applications. They were used in applications where most other pumps would fail and were designed to be an inexpensive, easy to maintain option for a variety of situations. They can transfer a wide range of media from wastewater to more viscous substances like slurries or even cement.

A decade of research and design innovations have led to refinements and improvements to the air valve and wetted path. The pumps that have emerged are tough and versatile enough to meet the stringent demands of the mining and heavy construction industries and the precise and sanitary requirements of the pharmaceutical and food processing industries.

Since their inception, one significant challenge in designing and producing an effective AODD pump has been providing the end user with a good fluid flow rate while at the same time minimizing air consumption (reducing energy costs). 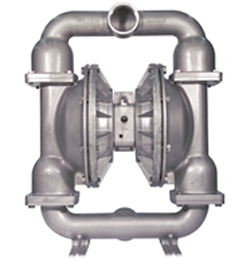 AODD pumps with an Efficiency Management System (EMS) into the ADS. The EMS allows the end user to adjust the size of the air inlet ports.

All AODD pumps have an ADS in their design. Part of the ADS's job is to direct compressed air to one air chamber while exhausting air from the other air chamber. The air valve performs this task. This air valve can take many forms, but in many cases is a "spool" that slides back and forth in a cylindrical bore in the pump housing. It uncovers and blocks ports so that compressed air is supplied to the appropriate chamber and exhausted from the other. These original spools had a single diameter and air pressure was supplied to both sides of the spool. The pressure would momentarily be removed from one end of the spool to make it "shift." The shift redirected the compressed air to the other chamber.

While this single-diameter spool in early AODD pump designs was innovative and effective, its shape meant that the ADS had a higher chance of stalling if the momentary signal did not completely shift the spool. This would lead to loss of production, inefficient operation and increased pump downtime.

A number of improvements have been made to the AODD pump's ADS to improve performance, reliability and efficiency.

One improvement was the introduction of a new "unbalanced" air valve spool. This new design did not rely on a momentary signal to shift the spool. Rather, it relied on an unbalanced signal to control the shifting of the pump. The new spool had two different diameters. The smaller of the two ends was constantly supplied with air pressure. This air pressure would force the air valve in one direction. Alternately, the larger end of the spool would be pressurized. The larger area would produce a higher force (than the small end) and shift the spool in the other direction. The forces on the spool are always unbalanced and constantly force the spool in one direction or the other. 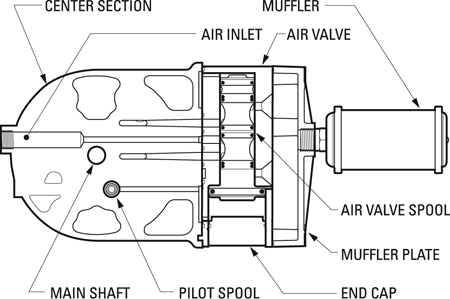 Cross-section of an air distribution system (ADS) that incorporates an unbalanced spool to prevent the pump from dead-heating.

Another innovation resulting in increased efficiency and energy savings was the incorporation of "advanced porting." Advanced porting introduced larger air ports to the ADS that allow exhaust air to leave the pumping chamber with as little restriction as possible. At the same time the size of the inlet air ports was optimized to maximize the flow rate and increase efficiency.

The latest generation of AODD pumps has added another level of adjustability to the ADS with the invention and incorporation of an Efficiency Management System (EMS). The EMS allows the end user to adjust the size of the air inlet ports. Decreasing the size of the inlet ports restricts the air flow rate into the air chamber. It allows some control over how much and how quickly the air chamber is filled and can prevent the chamber from "overcharging" with air.

This integrated feature allows the end user to optimize performance when operating the pump at their desired inlet air pressure by adjusting the air inlet passage size until the fluid flow requirement is met. This ensures that the pump is running in its most efficient state while still meeting the user's flow requirements, pumping only what is necessary while using the least amount of air to do so. (See sidebar for example of savings.) 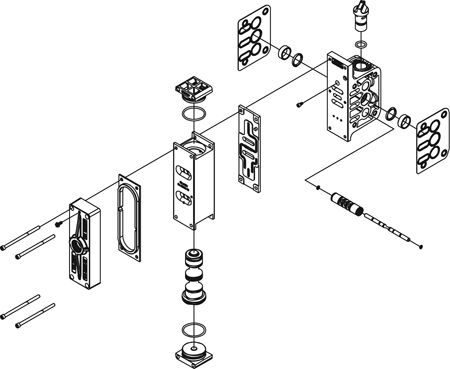 An exploded view of an Efficiency Management System (EMS). The integrated feature of the EMS allows the user to optimize performance when operating the pump at the desired inlet air pressure by adjusting the air inlet passage size until the fluid flow requirement is met. This ensures that the pump is running in its most efficient state while still meeting the user's flow requirements, pumping only what is necessary while using the least amount of air to do so.

Using the EMS to reduce the size of the inlet air ports and restrict air flow into the air chambers has the added benefits of increasing diaphragm life (reducing maintenance costs) and increasing dry vacuum.

In addition to improvements to the ADS, advancements are being made to the wetted path to reduce friction losses. The reduced friction losses result in an increased fluid flow rate without necessarily increasing air consumption. These improved wetted paths have been designed to "drop-in" to existing applications by employing common mounting footprints and fluid connections.

In these days of shrinking budgets and threatened bottom lines, finding the most efficient way to run a manufacturing operation is of the utmost importance. Savvy facility managers are replacing older AODD technology with new pumps that feature advanced ADS systems and EMS technology.

Many manufacturers have evaluated their operations, isolated the areas of inefficiency and enhanced their return on investment through the introduction of pumping technologies that promise increased efficiency and lower energy costs. AODD pumping technology that uses an EMS can reduce operating and energy costs, allow for more pumps in the same factory without adding compressor capacity and provide long-term benefits to the manufacturing operation.