During the upgrade, the facility was converted from biochemical oxygen demand (BOD) and ammonia removal to total nitrogen (TN) and total phosphorus (TP) removal. An additional ring was added to the existing oxidation ditch increasing detention time to meet these new permit regulations. In spite of the upgrades, there was no appreciable improvement in settling. Numerous efforts were made in the last five years to improve settleability with minimal success.

In August 2018, the facility decided to invest in adding polyaluminum chloride (PAC) to the system. This chemical addition was moderately successful with SVI reductions of about 50 percent, with dosing up to 70 gallons per day (gpd).

Several operational modifications were recommended. Modifications made by the plant staff included removing aeration discs from the anerobic zone (fourth pass) and reducing the disc speeds in the anoxic zones. The sludge age was also increased from 13 to 16 days, which improved overall operation.

Sludge characteristics can be improved with holistic process optimization, which is important when evaluating the use of gravimetric selection technology—a method that retains denser biomass while wasting out the lighter fraction of mixed liquor suspended solids (MLSS) in the treatment system. The gravimetric selection technology system increases process throughput and performance through the selection of dense sludge aggregates with improved settling rates and the promotion of enhanced biological phosphorus removal (EBPR). 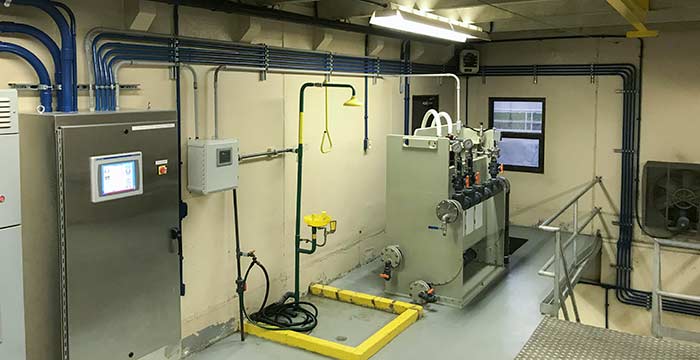 Conventional activated sludge (CAS) is the predominant global wastewater treatment technology. One key requirement of the CAS technology is the ability to effectively separate the liquid and solid fractions.

Unfavorable settleability can plague facilities seasonally or can be a chronic issue. Gravimetric selection technology helps alleviate this problem.

The overflow (composed of the light fraction of MLSS) gravity feeds to an existing scum collection pit where the existing waste activated sludge (WAS) pumps transfer waste sludge to solids handling. The underflow (composed of the denser fraction of MLSS) gravity feeds back into the RAS tank where it comes together with existing RAS before being pumped back to the head of the oxidation ditch.

The facility has a permitted flow of 3.8 million gallons per day (mgd) with the following average effluent limit concentrations:

The system was operational approximately two weeks after installation began. Once in service, all waste sludge was processed through the gravimetric selection technology system. Within several weeks, the SVI was reduced from a December 2018 monthly average of 144 mL/g to a February monthly average of 71 mL/g. The settling velocity of the MLSS also improved with the clarifier sludge blanket levels.

As settling continued to improve over time, the plant was also able to reduce their PAC addition by about 70 percent. The system continues to show stable performance with the effluent ammonia values less than 1 mg/L on average. Additional work was conducted through this past summer to understand improvement to biological phosphorus.

With the addition of the gravimetric selection technology process, the Pennsylvania facility was able to correct this issue, allowing for improved settleability and BNR performance.

Daniel Dair is the vice president of innovation for World Water Works, Inc. He has a bachelor’s degree in chemical engineering from the University of Rhode Island. For more information, visit www.worldwaterworks.com.