As you would expect, as shown in Image 1, M&A activity worldwide has declined in 2020 both in terms of the number of transactions and the total value of those transactions.

The bar graph shows the number of M&A transactions worldwide has been at a high level over the last five years, peaking in 2017 and reducing slightly in both 2018 and 2019. The decline is more pronounced in 2020 due to the impact of the COVID-19 pandemic. Through November 2020, worldwide transaction volume was down 15% on an annualized basis.

The line in the graph below shows transactions volume measured as the total value of the transactions. This metric is influenced by the size and valuation of transactions. As seen in image 6 enterprise valuations, the values being paid for businesses, remain strong. The conclusion when looking at this data is that while the number of deals are high, the size of the deals are smaller—more middle market or even lower-middle market transactions.

When looking at the worldwide M&A activity by quarter over the last five years, we can see that the volume of transactions was increasing through 2019 and then declined in 2020 when the COVID-19 pandemic impacted the world. We believe demand for acquisitions remains strong, which is evidenced by the uptick in activity in Q3 2020 as shown in Image 2.

Looking specifically at the M&A activity in the fluid handling industry over the last five years, we see that level of activity was steadily increasing until the pandemic-driven decline in 2020.

However, it is interesting to note the shift in the location of the deal activity. In the second half of 2020, 64% of the target companies were based in Europe and almost exclusively the buyers were strategic buyers with most also based in Europe. The conclusion is that the drop-off in the fluid handling industry M&A activity in 2020 was more pronounced in North American than in Europe.

Valuations at Strong Levels in 2020

The valuations shown in Image 6 are reflective of disclosed valuation information, which tends to be provided for public company acquisitions and, therefore, somewhat biased toward larger transactions that typically trade at higher multiples versus lower-middle market privately held companies. In Image 7 the valuation multiples for private transactions in the lower-middle market are shown.

For private business owners, there is a substantial benefit to achieving above market financial performance, especially if it can be done consistently. 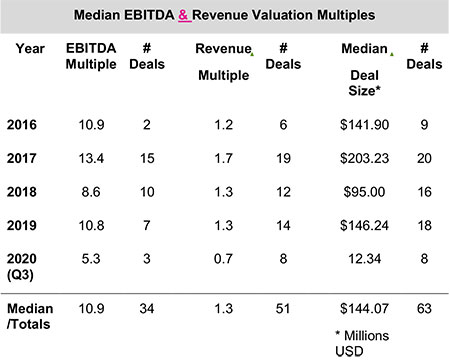 The industry valuations have been generally in line with the overall M&A market until 2020. However, the relatively small number and nature of the fluid handling industry transactions with disclosed valuations in 2020 would indicate these numbers are probably not fully indicative of market level valuations.

1. Warburg Pincus completed the acquisition of Sundyne from funds advised by Carlyle and BC Partners. Sundyne was part of the group of companies divested by United Technologies in 2012 in a $3.46 billion transaction that formed Accudyne Industries. Sundyne was the remaining piece of Accudyne with Carlyle and BC Partners having previously sold Sullair and Milton Roy in separate transactions.

4. The Weir Group PLC has entered into an agreement for the all-cash sale of its oil and gas division to Caterpillar Inc. for an enterprise value of $405 million (£314m), subject to customary working capital and debt-like adjustments at closing This follows the announcement in February 2020 that Weir would seek to maximize value from its oil and gas division as it continued its strategic transformation into a premium mining technology pure play.

Thomas E. Haan is the principal of Global Equity Consulting LLC, providing business development and M&A advisory services to midsize manufacturing, distribution and service companies in the fluid handling industry. He is also an operating director for City Capital Advisors, an M&A advisory firm based in Chicago. Haan has more than 40 years of experience in senior management and advisory roles for manufacturing, distribution and service companies in fluid handling industry. He has served as an appointee of the U.S. Secretary of Commerce on the Michigan District Export Council, past president of the Fluid Sealing Association, as well as chairman of the Associate Member Council and a member of the Board of Directors of the Hydraulic Institute. He may be reached at thaan@globalequityconsulting.net.