Industrial processes accounted for 37% of global energy consumption in 2018, making it the biggest single category of energy users in the world. Since most of this energy comes from fossil fuels, small improvements in industrial energy efficiency can have major impacts on carbon dioxide (CO2) emissions and climate change dynamics. New anti-fouling technology can improve energy efficiency and heat transfer rates, eliminate the need for cleaning shutdowns, and offer a way to cut energy use and CO2.

Fouling and scaling of heat exchangers, pipes and pumps—the deposit of unwanted organic and inorganic materials that cause plugging and blockage—reduce flow rates of liquids and gases, resulting in wasted energy for heat exchange and pumping processes.

To get a feel for the environmental impact caused by fouling in heat exchangers alone, consider this: Fouling in heat exchangers, which cuts heat transfer rates, is responsible for 2.5% of global CO2 emissions. These emissions are equal to that caused by 200 million cars—and preventable by inhibiting fouling. However, until now, it was thought that fouling simply could not be avoided.

The Heart Disease of Industry

Fouling of industrial equipment is—much like heart disease—a problem that results when the blockage of smooth fluid flow occurs. In industry, fluids are constantly being moved from one place to another as they are processed. When fouling and scaling are allowed to build up, which happens often in industrial processes, there are negative consequences throughout the value chain.

These include not only the heat transfer and energy losses mentioned above but also costly lost production time when plants need to be shut down for manual cleanouts. These manual cleanouts are often done with harsh and potentially toxic chemicals which are then released into the environment. The work also involves safety risks to the personnel performing the maintenance.

So, sustainability—both sustaining the environment as well as people’s lives—is impacted by fouling and scaling.

Many different substances can contaminate, coat and plug equipment surfaces, depending on the chemicals used. Fouling can be elastic or inelastic, porous or solid, organic or inorganic. Due to these differences in fouling types, the cleaning process can be troublesome. Often, this requires a pause for cleaning, resulting in manufacturing plants losing production time and profits.

Pipes Get Choked, Too

Scaling deposits are common in pipes as well and can cause unwanted changes in flow rates, pressure and temperature. But, finding the exact location where scaling is built up—which is crucial to be able to remove it—is not easy work since pipes are, by design, sealed and closed.

Scaling, a buildup of ions around the interior walls, is an issue for piping. Over time, this buildup constricts the diameter of the pipe, choking off the flow and taking more pumping energy. The scaling can be anything from biofilm, biofouling, mineral scaling or chemical fouling.

Contamination of end products is also a threat, including food and beverage and pharmaceutical plants, since the buildup of ions can eventually break off and end up in the finished product. 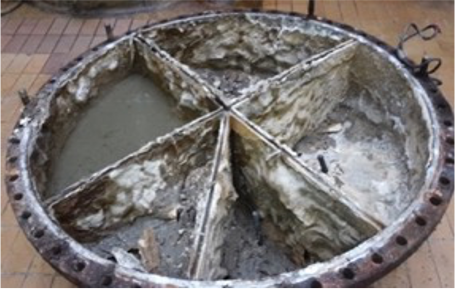 Prevention Is the Best Cure

The most optimal and energy-efficient solution would be to prevent the accumulation of fouling on the surfaces of equipment and to avoid blockages. However, fouling prevention is often challenging and/or expensive. The formation of blockages can be reduced somewhat by using chemicals, but they may negatively affect product quality and cause harmful environmental impacts (polluting effluents) or safety issues for employees.

Now, new technologies and methods are being developed to prevent fouling and scaling from happening in the first place. One of these approaches is a new inline ultrasonic cleaning technology tool that can clean up existing fouling/scaling and prevent future deposits from occurring.

Power ultrasound is a new technology that is based on existing ultrasonic methods that help industries get rid of fouling issues and increase energy efficiency. Traditional ultrasound technology is well known and used for its cleaning properties and effective removal of mineral and organic fouling from metal surfaces. But power ultrasound involves removing the piece of equipment from the plant where it is installed and placing it in an ultrasonic bath while ultrasonic waves pry the deposits loose.

Advances in software now allow an easier application and targeting of power ultrasound. When combined with the right external mechanical attachment, it is possible to direct and apply software-guided power ultrasound directly inside the process equipment, without the need to open up or dismantle the equipment or even to stop the production process. An example of its usefulness comes from South Africa.

A South African pulp mill produces 200,000 tons of semi-chemical pulp annually. The mill has three multi-effect evaporators that are connected in series and use steam to evaporate water from the process liquid to increase dry material content to more than 50% in the red liquor. The steam circulates from the first effect to the second and fourth effects then into the condenser.

Normally, the evaporators get fouled by the red liquor and their efficiency then drops due to the fouling/scaling in the evaporator tubes. Usually, the first effect—the hottest one—is the most fouled.

Every month, when the fouling reaches a critical level, the overall heat transfer efficiency and key performance indicator (KPI, a measure of the amount of water evaporated versus live-steam pressure) drops. The mill then needs to stop the production line and wash out all of the evaporators.

At the end of 2019, the project started, and the power ultrasound solution was installed externally on the first effect to prevent fouling from accumulating on the evaporator’s inner tubes. After a month and a half, process improvements were seen not only in the first evaporator but also in the second evaporator.

The ultrasound solution has now been used in the mill for almost a year and a half. The ultrasonic treatment of red liquor has been shown to increase the time between washes by more than 60% and the energy efficiency improvement in evaporators by more than 50%. Additionally, the evaporation rate has increased by more than 6%, and the operational uptime by 25%. These calculations are based on the data analysis and calculations by comparing historical process data to the process data received since the ultrasound anti-fouling equipment was installed.

Markus Eklund is an account executive at Altum Technologies. He holds a Master of Science in technology and manages several customer projects across the energy and chemical industry in Europe, America and Africa.

Beda Arponen is an account executive at Altum Technologies. She holds a Master of Science in economics and a Bachelor of Arts in international business. Arponen manages several customer projects across the pulp and paper industry in Europe, America and Africa. Contact Eklund or Arponen at info@altumtechnologies.com. For more information, visit www.altumtechnologies.com.