Oil giant Saudi Aramco (Aramco) launched the world’s largest initial public offering (IPO) on Dec. 11, 2019. The Saudi government sold 1.5 percent of its stake in the state-owned company, raising $25.6 billion. The company, considered the most profitable in the world, was valued at $1.8 trillion. The initial public offering provided much-needed funds for Crown Prince Mohammad bin Salman’s plan to reform the Saudi Arabian economy to make it more competitive in the global economy and less dependent on oil revenues.

The company’s market value has fallen by $200 billion since its mid-December peak, and the stock’s downtrend is accelerating in the wake of heightened tensions between the United States. and Iran. The company’s shares have dropped despite a surge in crude oil prices of as much as 6 percent to near $70 per barrel, which suggests that rising oil prices aren’t necessarily a boost for the energy giant. 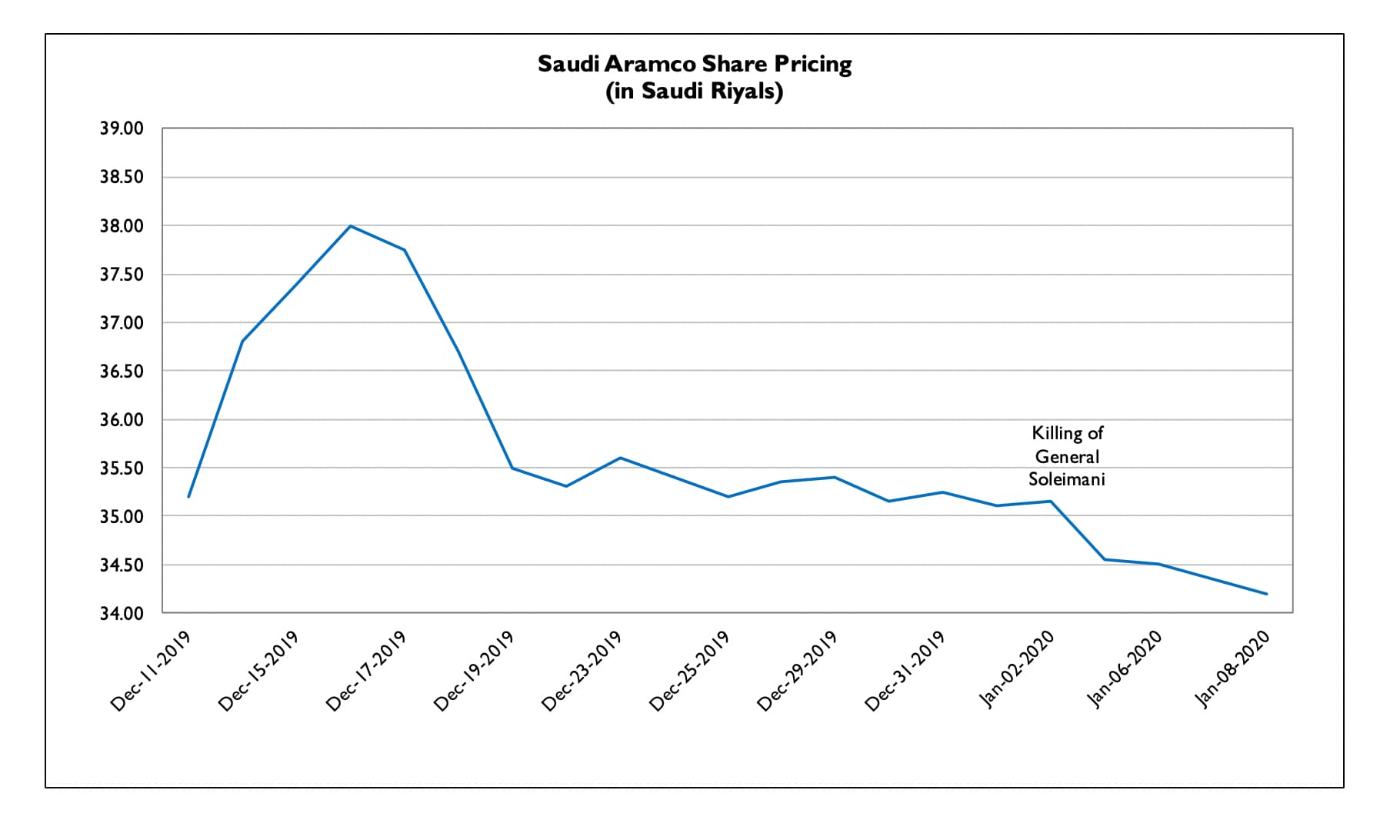 As of Jan. 8, shares of Aramco have fallen 10 percent from their peak on Dec. 16, a few days after they began trading on Saudi Arabia’s Tadawul exchange. Over the same period, BP PLC has gained 5.6 percent, Royal Dutch Shell PLC (UK-listed Class B shares) climbed 6 percent, and ExxonMobil shares have fallen 1.1 percent.

Aramco shares have dropped further since the United States killing of Iran’s most prominent general, Quds Force commander Qasem Soleimani, on Jan. 2. On Jan. 8, Aramco fell 0.4 percent to close at 34.20 Saudi riyals, or about $9.12, a share. At that level, Aramco shares are down 2.8 percent from where they closed on their first day of trading on Dec. 11, but still 6.9 percent above the IPO price of 32 riyals (or $8.53).

The attack on Soleimani is a reminder of the risks of investing in the region. Investors are worried that Iran, one of Saudi Arabia’s regional foes, could target Aramco’s production facilities or its computer networks. In September of last year, the company’s oil production was cut in half after explosive-armed drones struck some of its most important production facilities. The U.S. and Saudi Arabia suspect Iran of launching the attack. A month after the attack, Aramco was able to resume its normal production level of 9.9 million barrels per day.

Iran has strong cybercapabilities, and it has previously been linked to attacks on major banks like JPMorgan Chase, Bank of America and Wells Fargo. In 2012, Aramco suffered one of the worst cyberattacks when 35,000 of its computers were partially wiped or totally destroyed by hackers.

Aramco’s stock price depends on continued support from local and regional investors, as most of the investors who participated in the $25.6 billion IPO were Saudi Arabian individuals, companies and institutions, along with the funds of neighboring Gulf Arab monarchies. Saudi Arabian government institutions invested about $2.3 billion in the IPO.

Through its IPO and the company’s numerous business ventures, Aramco is a national oil company that wants to become a global energy company. Much of the company’s expansion plans focus on developing countries in Asia, where demand for oil is likely to grow in the coming years. The U.S. is also a target for growth especially in the areas of refining, petrochemicals and liquefied natural gas. Aramco already owns the largest oil refinery in the U.S., the Motiva Enterprises plant in Port Arthur, Texas. It also has research centers and technology offices in Boston and Houston, as well as an office in New York that organizes scheduling, storage and transportation of crude oil in the U.S. and Canada.

Despite its recent drop, Aramco remains the world’s most valuable listed company with a valuation of $1.8 trillion. The second-most valuable listed company, Apple Inc., is worth about $1.3 trillion. Aramco earned $111 billion in 2018 while producing 13.6 million barrels of oil per day. Its reserves are five times larger than its rivals—ExxonMobil, Chevron, Shell, Total and BP—combined.

Flare-ups of tension in the Middle East tend to benefit energy stocks because they generally boost the price of oil. However, Aramco is more exposed to the U.S.-Iran conflict than its peers around the world due to the concentration of infrastructure within the reach of Iran’s military capabilities. The prospect of a wider conflict between Iran and the U.S./Saudi Arabia jeopardizes Aramco oil exports and also risks driving away the overseas investors Saudi Arabia needs to provide fresh capital and diversify its economy.