The Netherlands is nestled in the delta of three major European rivers. Water related issues such as flooding are always a risk. After a serious warning in 1995, when 250,000 people were forced to evacuate due to dangerously high water levels, the national program “Room for the River” was established. 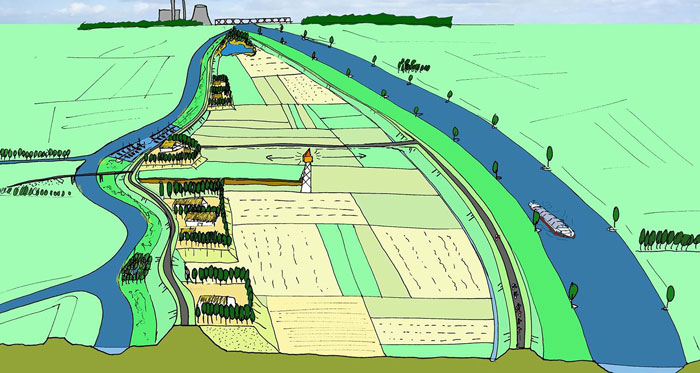 A safer river area and maintaining an attractive living environment were the objectives of the project. More than 30 water storage facilities have been installed in the Netherlands to handle excess river water when water levels are high. A project to create raised islands—or terps—was launched at Overdiepse Polder as part of the plan to deal with excess water.

When the water level of the River Bergsche Maas is extremely high, it poses a threat to cities such as Den Bosch and Waalwijk. A storage area of 1,375 acres named Overdiepse Polder could accommodate 2.4 billion gallons of water as temporary storage. Together with the agricultural residents, a terp plan was developed so that the residents could live safely in the water storage area, even when water levels were high. 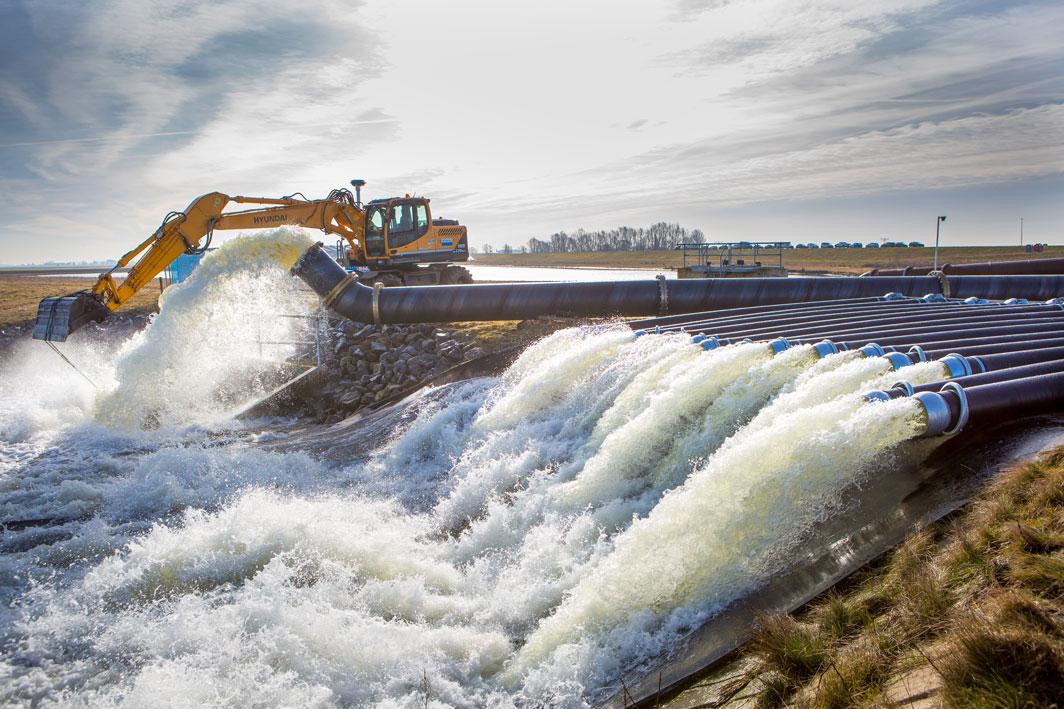 In 2011, construction began on a new 4-mile-long dike on the southern end of the polder. Eight terps with new farms were built against the new dike so the farmers would have a safe place to live. Each terp is approximately 5 acres in size, 20 feet high and holds 4.2 million cubic feet of sand and clay.

In 2014, the old farms were ready to be demolished, and the work began to lower the river dike on the north end and place a pumping station. A year later, a new lock was commissioned—including a large setup location for mobile flood control pumps. The project was completed following a European tender to deliver four mobile pump systems. Delivery took place in early March 2018. 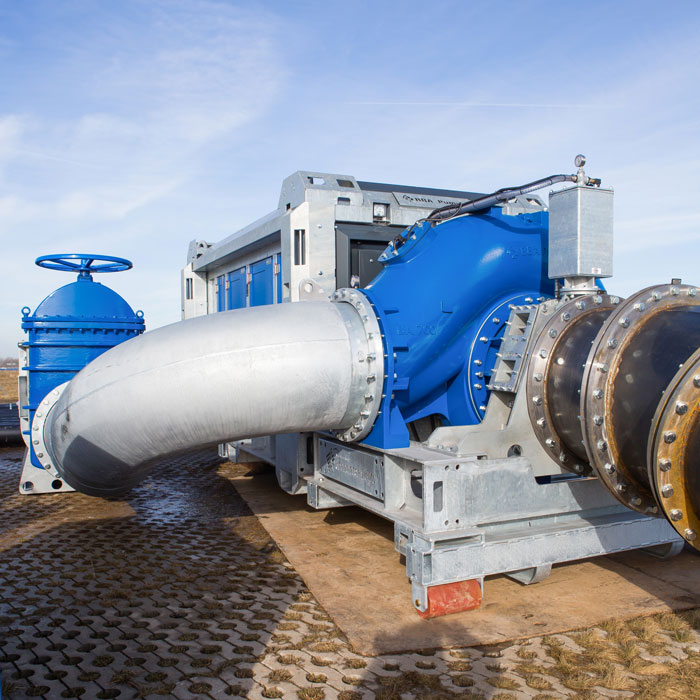 On average, river water flows into the polder once every 25 years. This lowers the water level by 11 inches. Because of the polder, the local residents of villages and towns remain protected against upstream flooding. In conjunction with the other “Room for the River” projects, this enhances the safety of more than 4 million people within the river area. When the polder is flooded and the farmers must keep their livestock inside, the area must be dry again within six weeks of the flooding. As soon as the river’s water level starts to drop, the lock is opened, enabling some of the water in the polder to flow back. Once the water levels are equal, the lock is closed again. 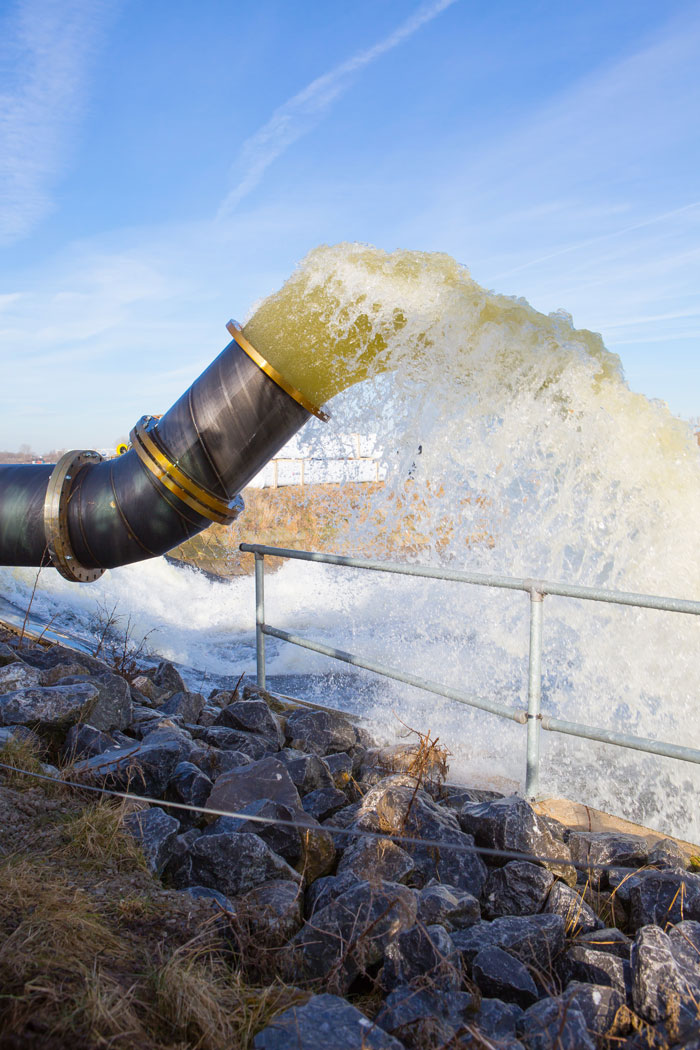 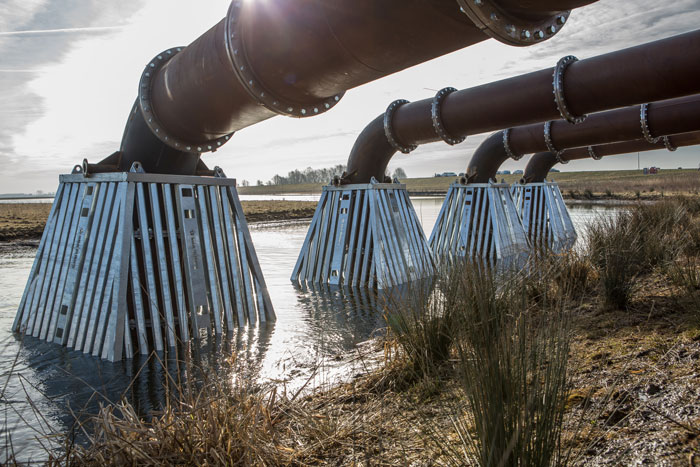 Images 4, 5 and 6. Mobile pump systems move water from the polder.

Subsequently, four mobile emergency pumps with a total pump capacity of 90,000 gallons per minute (gpm) are installed at the setup location. This is how the polder’s excess water is pumped back into the river. Finally, the remaining water is drained through a pumping station in the river dike, and the polder is ready again for agricultural use.

The mobile pumping systems are managed by the Brabant Delta Water Board. In times of flooding, speed is of the essence. The diesel-driven pumps are equipped with a “pull-up frame” so vehicles can quickly collect the pumps from storage and deliver them into the polder. Where possible, the pipework is equipped with quick action couplings so no time is lost during installation. After two weeks of pumping, more than 1.3 billion gallons of water could be removed from the polder.

During construction of the polder as well as during the pumps’ site acceptance test, interest in this Dutch project was high from both the Netherlands and internationally.

“It was quite exciting at times,” said Simon Hofstra, project manager of the development and construction of Overdiepse Polder. “Not just for the residents, who have lived in extensive building works for years, but also for the contractor because in the summer of 2014 he unexpectedly came across thousands of explosives from the Second World War. We are extremely proud of this project as we stayed within both budget and planning.”

Henno Schothorst is the product and marketing manager for BBA Pumps in the Netherlands. For more information call +31 314368436 or visit www.bbapumpsusa.com.