Q. How can power monitoring be used for condition monitoring of rotodynamic pumps?

A. Flow rate, operating speed, fluid density and viscosity are operating conditions that impact the absorbed power. When using power monitoring to assess condition, operating point and process conditions must be monitored, and the pump must be operated at the same conditions when data is recorded. To adequately monitor the pump’s operating condition, users must measure the following: rate of flow, total head, net positive suction head available (NPSHA), pumpage viscosity and specific gravity. When variable speed devices are used, speed also should be measured.

Once it has been determined that changes in the power consumed by a pump are not the result of changes in its operating conditions, then the changes can be attributed to a pump or motor failure mode. Further study of the changes in power and other failure causes will be required to determine the exact mode of failure.

Monitoring the power consumed by a pump can give advanced indication of the following: changes in process conditions; excessive wear in the hydraulic components of the pump affecting performance; rolling element bearing failure; coupling failure; and shaft breakage. Caution must be used when applying electrical power monitoring techniques to pumps exhibiting “flat” power curves (i.e., where power changes very little over the operating range). In these cases, setting alarm points can be difficult because of the need to distinguish between small power changes resulting from operating point changes and power changes involving other causes, such as temperature changes in the motor or pump and normal process fluctuations.

There are several ways to monitor the power used by a pump. Note that some of these instrumentation/systems measure mechanical power, and some measure electrical power.

A. The characteristics of slurries require special considerations in the design of pumping systems. In general, flow velocity must be kept within an optimal range. Higher velocities result in high energy requirements and wear. Lower velocities cause instability and plugging of pipes.

Keeping velocities low but simultaneously above a certain minimum is especially important in a slurry pipeline. Figure 12.3.6 gives a generalized depiction of slurry head as a function of flow in piping systems for the two most common slurry types encountered in mineral slurry applications: settling and non-settling (also known as non-Newtonian). Various models and methods exist for the determination of system head and velocity requirements when pumping slurries. 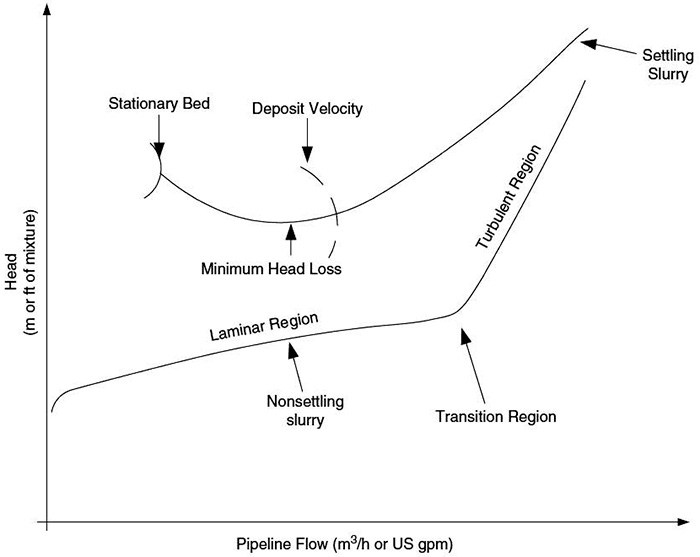 With settling slurry systems, the pipeline friction loss characteristic may reach a minimum and then increase with decreasing velocity, as seen in Figure 12.3.6. This creates the possibility of an unstable intersection between the pump and the pipeline head curves, so operation below this minimum head loss velocity should be avoided. Settling slurries also will form a stationary deposit in the pipeline below a certain velocity. Both limits must be checked because either of the above limits may occur at a higher velocity relative to the other. For safe operation, the flow velocity should be at least 10 percent above the larger of the minimum head loss velocity and the deposit velocity.

With a non-settling slurry, the lowest specific energy consumption often occurs at the transition between laminar and turbulent flow. Operation in turbulent flow also ensures that any coarse solids in the flow remain suspended. For these reasons, it is often recommended to operate at a velocity just above the transition to turbulence, as seen in Figure 12.3.6. However, operation in laminar flow is sometimes desired to reduce
pipeline velocity and associated wear. Without turbulence, any coarse solids present in the flow may settle, forming a stationary deposit. In this case, expert advice should be sought during pipeline design.

There will always be some inaccuracy in calculations because of variations in factors such as slurry and piping geometry. These small variations can affect system head requirements significantly, so provisions should be designed into the system to adjust the pump output to match the actual system needs. This can be accomplished by altering the pump speed using a variable frequency drive, sheave changes or changing the impeller diameter. In either case, excess driver power must be available to accommodate the new pumping requirements.