Questions about starting electric motors are common. Motor starting problems resulting from these questions can be costly and confusing, leading to production delays and sometimes catastrophic motor failure. This article will briefly explore some of the most common questions about the direct online (DOL) starting of squirrel cage induction motors. Through proper application, end users can have confidence that their motors and related equipment will not incur damage during the starting cycle.

Speed-torque-current curves are plots of a motor’s torque and speed characteristics from zero speed up to no load speed (practically synchronous speed for an induction motor). All terms are commonly plotted as either percentage of full load or in their actual units (e.g. revolutions per minute [rpm], foot-pounds of torque and amperes). It is conventional for torque and current to both be plotted on the same graph, as well as being presented separately as shown in Image 1. Typically, plots of reduced voltage torque and current, as well as the load’s speed-torque characteristics, are also given. For the latter, it is key to obtain the load’s speed-torque curve and not simply the “running curves” for pumps and fans. Finally, these graphs can be plotted either horizontally (speed on the x-axis, torque and current on the y-axis) or vertically (speed on the y-axis, torque and current on the x-axis). 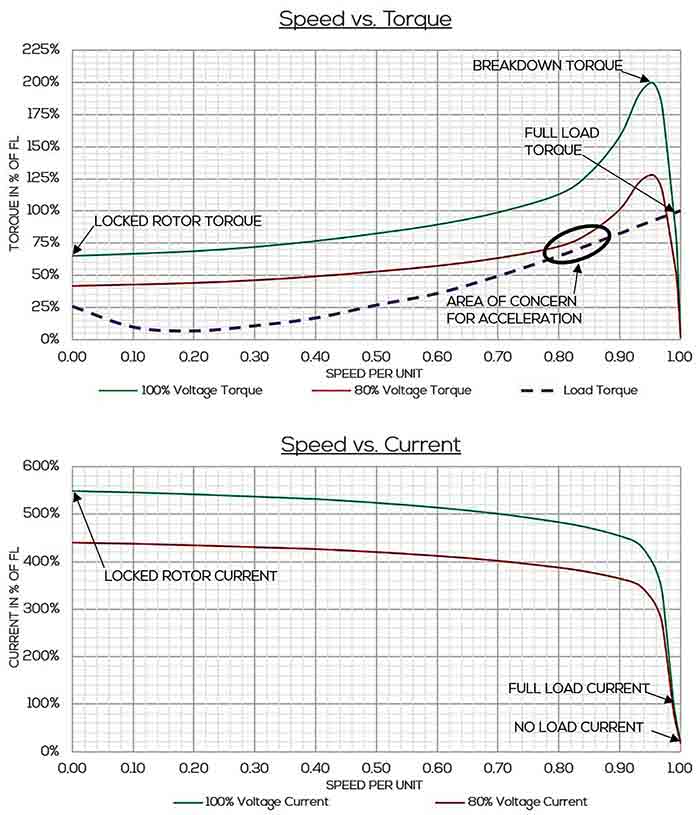 Key performance information related to motor starting is shown on speed-torque-current plots. In Image 1, the intersection of the torque curve at zero speed will show locked rotor torque (LRT), while the maximum torque value shown represents breakdown torque (BDT). Both full load torque (FLT) and current levels (FLC/FLA) are found by drawing a vertical line from the rated speed point until it intersects both plots. The point on the current plot corresponding to zero speed will show locked rotor current (LRC/LRA), while the motor’s no load current (NLC/NLA) is shown by the point corresponding to the highest speed shown.

Thermal damage curves are plots that provide information about acceleration times, operational time limits at finite current levels and time limits on operation above full load. These curves are also known as “thermal limit curves,” “safe operating time curves” or “acceleration curves.” They are typically plotted with motor current as the x-axis and time in seconds as the y-axis on a logarithmic scale. As seen in Image 2, the plots found closest to the current scale show motor current during acceleration. These plots, typically at various voltage levels, intersect the speed scale at a point that represents LRC and intersect the time scale at the full-load current point to show anticipated acceleration time. 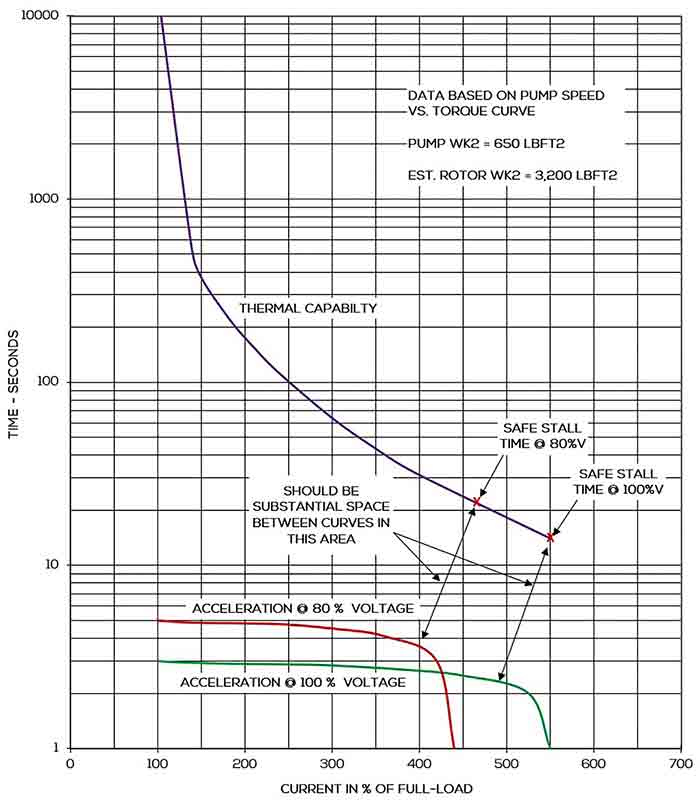 There are usually one or two plots shown above the accelerating current curves, which show safe locked rotor times as well as a “running” or “overload” curve. The safe locked rotor time (“safe stall time”) plot(s) are intended to show the number of seconds a motor can safely withstand a given current level at various voltage levels.

If shown separately, the “cold” curve provides the safe locked rotor times for the motor when it is first started (the “cold” condition), while the “hot” curve provides the safe stall times after a motor has either been recently started or run under load. It should be noted that Image 2 only shows a single plot connecting the safe stall time plots in cold condition with the “overload” curve. The safe stall time plots should never overlap or come substantially close to the motor accelerating current plots, as this represents dangerous heating in the rotor bars and end rings.

The overload curve shows the time that a motor can safely operate while running at, or above, full-load current. Typically, the upper bounds of this curve correspond to a continuous time associated with the motor’s highest safely rated load level (often the service factor). If this plot is followed to higher levels of current (and therefore lower values of time), it will often be plotted to intersect the safe stall time curve(s), but most often is shown to just nearly intersect them.

Most standard commercial induction motors are rated as National Electrical Manufacturers Association (NEMA) Design B, which provides a reasonable balance between LRT and LRC for most loads. For larger motors or specialty applications, however, finer performance requirements might be in place, which require a motor design with features like a custom rotor bar shape or specialized rotor alloy. Aside from starting the motor via a device such as an auto-transformer, special contactor arrangement, or variable frequency drive (VFD), the greatest effect that on-site conditions have on locked rotor performance is the customer’s voltage dip level.

LRC decreases in basically direct proportion with voltage, while LRT decreases as approximately voltage squared and can quickly cause starting issues for processes that start under load. Careful coordination between the end user and motor supplier is required to ensure that a proper motor design is selected for both onsite conditions and the load’s profile to provide reliable, safe locked rotor performance. 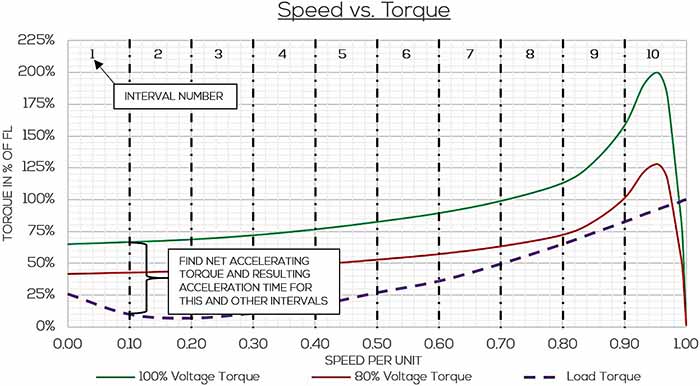 There are several methods available for estimating acceleration time, but all methods must begin with the motor and load’s speed-torque curves and total inertia. The most basic method divides the speed torque characteristics up into equal intervals (typically somewhere around 10 as shown in Image 3) and finds the net accelerating torque available during that period to calculate its individual contribution to acceleration time. Net accelerating torque is defined as the load torque subtracted from the motor torque at a given point (generally the motor torque should be at least 10 percent greater than load torque). Once net accelerating torque and time have been found for all intervals from zero speed to full-load speed, the times in seconds are added to provide total estimated acceleration time. For every interval, the total inertia (motor and load reflected to motor shaft) must be accounted for, as high inertia loads (e.g. large centrifugal fans) can lengthen acceleration times.

Finally, similar to locked rotor performance, voltage dip and recovery must be considered, as they will reduce motor torque available and thus increase total acceleration time.

There are numerous questions surrounding motor starting that can be explored outside of this analysis, but some other points for consideration are: