Single seals (API 682 Arrangement 1) are the most commonly used seals in most industries. Reliable performance and simple setup make these a good choice for many applications. One challenge with this design, however, is detecting seal performance degradation and minimizing leakage in the case of a failure. This becomes even more challenging if the pump is located in a remote area or at an unmanned facility. In many cases, these applications use API Piping Plan 65, which captures leakage from the pump and detects it in a remote detection vessel. While this is effective, it is often only sensitive to large leak rates. API 682 4th Edition introduced two new options to improve monitoring capability: Plan 66A and Plan 66B.

API Plan 66A is a piping plan designed for earlier detection of seal leakage and for minimizing leakage from the seal gland. The plan is similar to a conventional, single-seal design with the addition of a close clearance bushing installed between the stationary seal face and the drain cavity (see Figure 1). 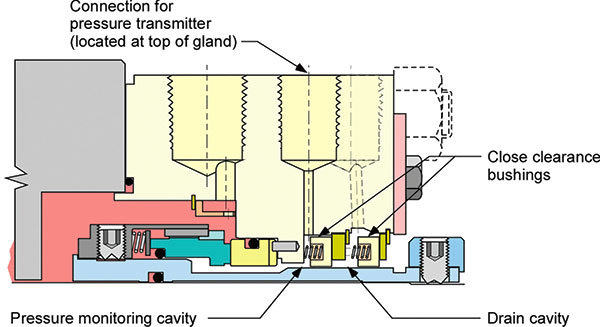 As leakage migrates across the seal face, it must flow across the bushing before entering the drain cavity. Low leak rates are associated with normal seal performance flow without restriction. If the seal begins to fail and the leak rate increases, the inner bushing will restrict the flow and increase the pressure upstream of the bushing. The cavity upstream of the bushing can be monitored with a pressure transmitter, and the pressure can be trended over time. This will provide the operator with data that can give an early indication of performance degradation or a seal failure. The basic description of the piping plan is documented in the 4th Edition of API 682 (see Figure 2).

An alternative version of this piping plan, Plan 66B, is also included in API 682. This version is similar to a standard, single-seal design with the addition of an orifice plug in the drain port (see Figure 3). An orifice plug is a solid metal plug drilled to prevent process fluid from leaving the seal gland. According to the standard, the orifice size should be 0.062 inch (1.5 millimeters) for clean, low-viscosity fluids and 0.125 inch (3 millimeters) for dirty or high-viscosity fluids. Because this piping plan only requires the addition of a drain plug and pressure monitoring port, it requires no more space than a conventional seal and may allow end users to retrofit existing seals in the field. 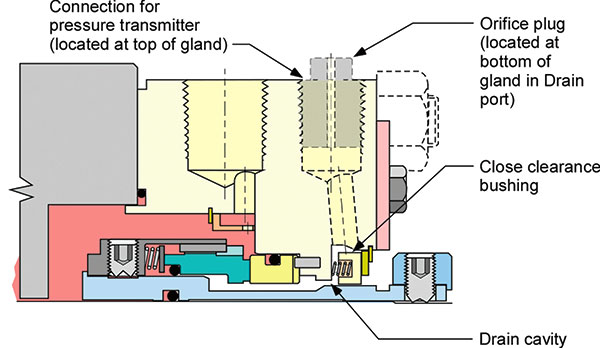 As normal leakage migrates across the seal faces, it will enter the drain cavity and flow freely past the orifice plug. If the seal begins to fail and the leak rate increases, the orifice plug and the throttle bushing will restrict flow from the gland and build pressure in the drain cavity. This cavity is monitored by a pressure transmitter and trended over time. An increase in pressure indicates that the leak rate has increased, and the operator needs to check the seal’s condition. Because process fluid exiting the drain cavity has two paths away from the seal gland (the bushing and the orifice plug), Plan 66B will be less sensitive to leakage detection and less effective at restricting total leakage than Plan 66A. The basic description of the piping plan is also documented in the 4th Edition of API 682 (see Figure 4).