Investments are rampant in the power generation sector as demand for electricity grows in both industrial and residential segments. Many countries invest considerable time and money to expand the energy source mix and discover cleaner technologies. Although coal is expected to remain a significant contributor to the energy mix, renewable sources are gaining a prominent presence in multiple countries.

China will account for 26.8 percent of the world electricity output by 2030, up from 19.2 percent in 2010. To achieve this, China has enacted more than 33 policy initiatives to support renewable electricity, covering areas such as solar and wind energy. Hydroelectricity also contributes more than half of the renewable energy sources.

Improved renewable generation is expected to result in 12.5 percent renewable share growth. In China, the secondary sector, which includes manufacturing, infrastructure and transportation, accounts for nearly three-fourths of the national power consumption. By 2030, one-third of Chinese power will be generated from renewable sources, and fossil fuel consumption will have decreased by 15.5 percent.

China has not only taken the lead in renewable energy sources but will also see significant investment in nuclear power plants. Nuclear power generation will attract attention as developing countries look to diversify energy portfolios while maintaining a low carbon footprint. Issues regarding safety, waste disposal and construction costs are being addressed to achieve energy independence.

Nuclear power growth rates are highest in China and India, while Russia continues to invest heavily in nuclear developments to export goods and services internationally. Despite the Fukushima nuclear crisis, developing nations are strongly pursuing nuclear power generation with an increased focus on safety.

Meanwhile, Europe is undergoing a massive stress test on its entire existing nuclear infrastructure. Germany, in particular, is following a staged process to shut down all its reactors. The U.S. continues to support nuclear power while stressing safety.

Renewable energy has long been associated with high capital costs. However, the environmental effects of climate change have left industry leaders concerned about operations. Wind and hydroelectricity are inexpensive sources of renewable electricity and can compete with coal and fossil fuels. Hydroelectricity has a large installed base and contributes to 56 percent of the total renewable power generation. This footprint has increased the potential for services and replacement markets. Offshore wind energy installations offer more potential for power generation.

Although countries are moving toward renewables, the number of coal-fired plants continues to grow in several emerging countries. Meanwhile, gas-fired plants have gained popularity in North America and Europe with the influx of shale gas. 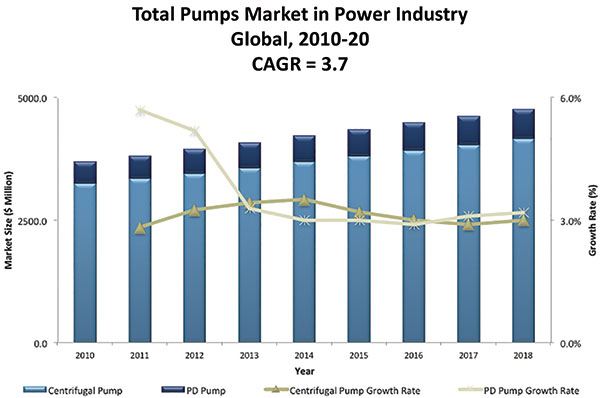 Nuclear power plant closures in Europe further intensify the drive toward gas-fired plants. In China—where emissions from coal-fired plants are a major concern—the number of gas-fired plants is expected to increase after the development of shale reserves in 2015.

The market for pumps in power plants is forecast to be fairly strong. Growing investments will help meet electricity demand for industrial and residential requirements. China, India and other Asian and African countries are experiencing strong infrastructure investments.

Replacing conventional, pressure-reducing valves and turbines with rotary lobe pumps and a variable frequency drive provides several benefits to the operator. This type of experiment is also expected in plants for other renewable energy forms.

Vane pumps will likely sustain growth as a result of increasing demand for the disposal of sludge cake in power generation. Because of the inherent features of vane pumps—such as zero slippage, energy efficiency and easy maintenance—they are extensively used in power generation, particularly for pumping feedstock and biofuels. Vane pumps are the ideal choice—equipment in power plants must last with easy, minimal maintenance.

Demand for new pumps will likely wane gradually in all end-user industries except oil and gas and power generation. The new pumps market is expected to grow at a nominal rate, while the service market will grow at a higher rate. This is primarily because these pumps are used for long periods, and power plants try to maintain initial efficiency. Besides advancements in pumps designs, opportunities are open for servicing technologies, such as remote monitoring, condition monitoring and vibration analysis.