Not All ANSI Pumps Are Created Equal

OEM pumps and parts outperform replicated products, and can save thousands per year in operating costs.

Industrial process managers who purchase and maintain pumps are familiar with a marketing tug of war. On one side are the manufacturers of well-known pump brands who claim their products offer higher quality with a lower cost of ownership. On the other side are replicators who make pumps and parts that cost less out of the box and claim to perform just as well as the OEM products.

Studies by the Hydraulic Institute show that purchase price of a medium-sized ANSI pump is only 10 percent of the life-cycle cost of a pump, with energy, maintenance and downtime costs accounting for nearly 70 percent. In many cases, the initial purchase price is the most heavily weighted factor in purchasing decisions.

This may be especially true for process pumps that conform to the ASME B73.1 specification, commonly known as the ANSI standard. Most ANSI pumps can look similar, even to the eyes of a skilled engineer—and because they are the world's most common process pump, with tens of thousands sold each year, it may seem reasonable to assume that replicated ANSI pumps and parts are likely to perform as well as those from OEMs.

To test this, engineers at an OEM pump company recently conducted a comparison of a popular OEM pump to pumps of identical size from non-OEM suppliers. The results showed that when it comes to purchasing pumps, the short-term gain of a lower purchase price equals long-term pain in performance. In every test:

Customers report that OEM pumps and parts also require less maintenance and reduce downtime, which further contribute to the lower operating costs for OEM pumps. This article provides details on the tests, and examples from two customers who switched to using only OEM pumps and parts. Together, they show that OEM claims to lower the total cost of ownership are not simply marketing hype but a fact that can be verified by controlled testing.

Performance tests were conducted on four sizes of ANSI pumps:

The testing was performed in accordance with ASME B73.1 and Hydraulic Institute Standard 1.6, Level A, which includes guidelines and uniform procedures for testing, recording data and acceptance criteria for centrifugal pumps. Level A testing uses clean water and involves monitoring the rate of flow, system head, input power and pump speed. Level A acceptance criteria states that “no minus tolerances or margin shall be allowed with respect to rate of flow, total head or efficiency at the rated or specified conditions.”

Each pump was tested as-received, with only the impeller clearance being set per the product installation, operation and maintenance (IOM) manual.

While the size of the differential varied, the OEM pumps outperformed their non-OEM counterparts in every measure on every test. A close-up look at the results for two of the pump sizes tested provides a snapshot of typical findings. 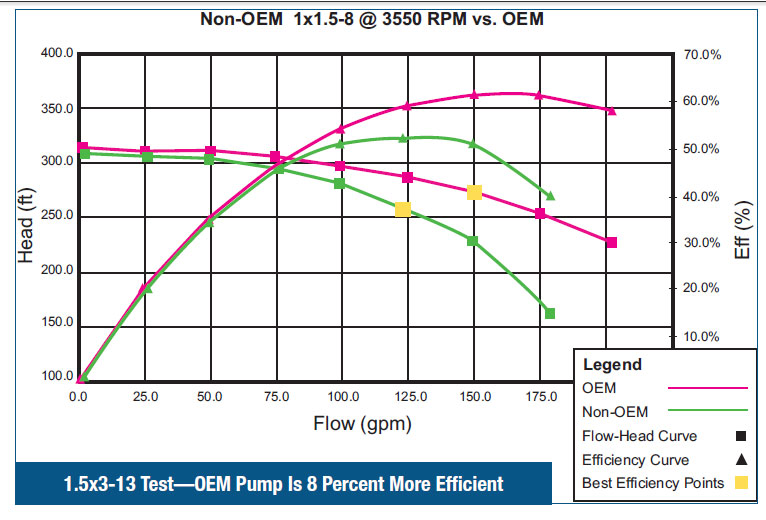 An efficiency delta of less than 10 percent may not sound like a lot, but it translates into major differences in energy costs.
Consider the 1.5x3-13 pump comparison, in a pumping application requiring a flow of 484 gpm at 459 ft—the actual performance result of the non-OEM pump at 3,550 rpm. The OEM pump would produce the same flow and head using a smaller impeller, using 8 percent less power, saving 8.3 hp (or 6.2 kW).

According to the U.S. Department of Energy, in August 2008 the average price of electricity in the North American industrial market was just under eight cents per kilowatt per hour—$0.076 on average, ranging from $0.066 in the Midwest to $0.138 in New England. At the average price, the energy costs in this application would be more than $3,700 lower per year with the OEM pump compared to the non-OEM pump.

The lower performance of the non-OEM pump has additional cost implications. Suppose the process required a flow of 484 gpm at 492 ft, which matches the performance of the OEM pump in the test. Although these requirements fall within the published performance curve of the non-OEM pump, in the test, it fell short. Two options would be available either the transfer process would take longer, reducing productivity and process control, or the customer could spend days or even weeks troubleshooting the underperforming pump, only to find that a larger impeller or even a larger non-OEM pump is needed to meet the performance requirement.

Energy savings were also significant involving the comparison with smaller non-OEM pumps in the tests. Consider an application for the 1x1.5-8 pump that requires 150 gpm at 229 ft, which matches the maximum tested performance of the non-OEM pump. The OEM pump would meet these requirements using 2.5 hp (1.9 kW) or 15 percent less power. In continuous service, the cost of wasted energy for the non-OEM pump would be more than $1,100 per year.

The energy savings in these examples apply to a single pump in continuous service. In a facility with 200 same-sized pumps from non-OEM vendors, the total cost of wasted energy would range from $227,000 per year for the smaller 8-in. pumps, to more than $700,000 for pumps with a 13-in. impeller. Engineers have repeatedly tested the 1x1.5-8 pump to simulate performance over the span of several years, and the results showed continuous underperformance. This proves that the choice of one non-OEM pump could cost a facility millions over multiple years.


ASME B73.1 Is More Than Just Dimensional Interchangeability

To meet the ASME B73.1 standard, all published performance curves, as well as factory testing, must be compliant with Hydraulic Institute 1.6, level “A”—the testing procedures described in this article.

The standard states “no minus tolerances or margin shall be allowed with respect to rate of flow, total head, or efficiency at the rated or specified conditions.” In the OEM vs. non-OEM testing, none of the non-OEM pumps performed up to the level of its published performance curve, meaning that none of the non-OEM products complied with the ANSI standard.

A high-precision manufacturing and quality control process contributes to a higher purchase price out of the box compared to most non-OEM products. But the tests confirm that most OEM pumps perform as expected, consistent with their published performance curves. Full compliance with the ANSI standard translates to lower overall operating costs throughout the life of the pump.

Dimensional interchangeability is only one aspect of the B73.1 standard. Many other design requirements for full compliance are needed:

A customer in the Southeast U.S. purchased replacement parts from a non-OEM supplier that increased operating costs and caused a major loss in production. The application was a typical condensate service, for which the customer used a large pump, size 4 x 6-17. After an extended time in service, the wet-end components needed replacement due to routine wear.

Against the recommendations of the OEM company's maintenance team, the customer decided to use non-OEM replacement parts to save money. Within an hour of the new wet end's installation, the pump began smoking and had to be shut down. Maintenance engineers discovered that the problem was in the stuffing box area, where the newly installed gland had touched the pump's shaft sleeve and damaged it.

The customer's requirements and original OEM pump were designed for 900 gpm at a head of 180 ft, with an efficiency of 68 percent and drawing 60 hp. With the non-OEM liquid end parts, the pump was actually running at 954 gpm with a head of only 114 ft while drawing 56 hp at an efficiency of 49 percent. The inefficiency and underperformance of the non-OEM parts generated approximately $7,600 per year in unnecessary energy costs and lost production. In addition, the pump was down for four weeks for troubleshooting on the ill-fitting non-OEM parts.

A paper manufacturer in Central Canada conducted its own test, by comparing the performance of OEM and non-OEM replacement parts for a stock pump connected to a machine chest, the tank that contains thick stock pulp before it is made into paper. The pump's performance levels fell drastically after replacing worn OEM parts with a non-OEM impeller and suction sideplate. The facility switched back to OEM parts and watched performance return to the published OEM curve within an hour.

Using this example, the company's mechanical engineering technologist convinced executives and purchasing agents to switch exclusively to OEM pumps and parts. Soon after the company began to switch, the maintenance and repair costs dropped dramatically. Labor costs for pump maintenance decreased, while the overall performance and reliability of the pumps improved significantly.

In the past 10 years, the mill has increased paper production, cut its replacement parts budget in half, lowered operating costs and decreased the manpower needed for maintenance and repairs.


Case closed: All ANSI Pumps Are Not Created Equal

Testing under Hydraulic Institute guidelines confirms a performance difference between “ANSI pumps” from original equipment manufacturers and from replicators that produce identical-looking pumps and parts based on OEM designs.

Though the ASME B73.1 standard is known for its dimensional requirements, many additional elements are needed to ensure proper pump performance. The OEM pumps tested were in full compliance and even surpassed the performance of their published pump curves. None of the non-OEM products met published curves, and therefore, were not in compliance with the standard.

The increased efficiency of OEM pumps can translate into thousands of dollars in energy savings for each pump, and have a huge global impact. According to the Hydraulic Institute, pumps use roughly 20 percent of the world's energy, and nearly 50 percent of that energy is wasted on pump and system inefficiency.

Along with energy savings, field experience suggests that OEM pumps and parts are manufactured with greater precision, which reduces maintenance costs and downtime. Taken together, the findings indicate that OEM products, despite a higher initial purchase price, have a lower total cost of ownership over time.