The retrofit saves the facility several thousand dollars per year.
by John Masters
12/13/2016

Western Oregon University has been recognized as one of the top aquatic fitness programs in the U.S. Because of its commitment to sustainability, the center jumped at the chance to cut its pool’s electricity consumption using two variable frequency drives (VFDs) designed to meet the challenges of water applications.

“It’s important to keep pool water clean for swimmers and to meet state regulations,” said Jake Whisenhunt, the university electrician who supervised the drive project. “At the same time, we want to reduce electricity costs and the carbon emissions associated with producing electricity.” 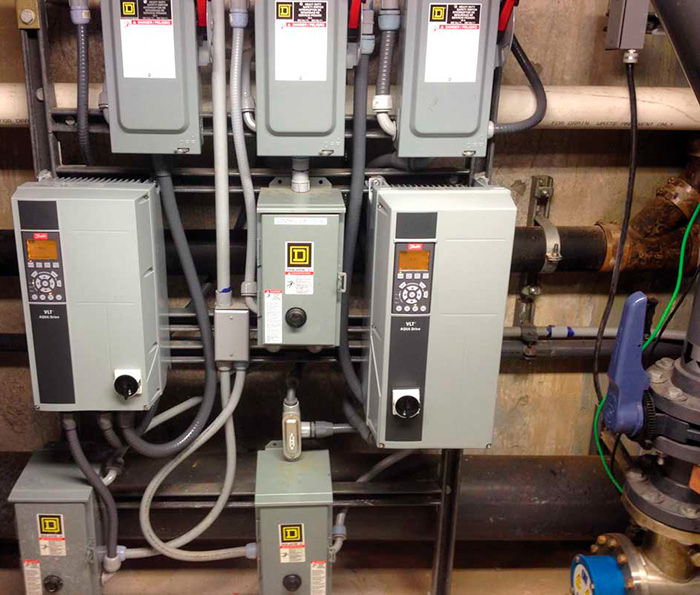 Image 1. These drives at the Health & Wellness Center at Western Oregon University reduce pump motor speed by changing the frequency of electricity supplied to the pump motor. (Courtesy of Danfoss)

Whisenhunt got the energy-saving idea from Neal Hershey, director of technical services for Interlocked Filtration Systems, of Tacoma, Washington, who suggested that equipping the pool pump motors with VFDs could substantially cut electricity costs.

“The pool measures 25 yards long, five lanes wide and holds 100,000 gallons of water,” Hershey said. “To meet state regulations, the water is cycled through a filtration system every six hours using a 15-horsepower (hp) inverter-rated circulation pump. A smaller spa holds 10,000 gallons, which is cycled every 30 minutes using a 10-hp pump. Together, the pumps use about 14,200 kilowatt-hours (kWh) per month at an annual cost of $11,200.”

According to Hershey, the original circulation pumps were equipped with soft motor starters only, which reduced the amperage draw during motor startup and motor wear. “But because the pumps were running full speed at 60 hertz (Hz) all the time, they exceeded the water turnover rate required by the state. They were wasting energy,” he said.

Hershey calculated that the pool could still meet state requirements by running the 15-hp pump at 49 Hz and the 10-hp pump at 47.2 Hz instead of 60 Hz—an average speed reduction of 19 percent.

“Theoretically, according to pump affinity laws, a 50 percent speed reduction would cut energy consumption by 87.5 percent. Of course, we can’t cut pump speed by 50 percent; minimum water flow has to be maintained.

Nevertheless, with (these drives), we can slow the pumps to match the required flow rate,” he said.

The facility also saves energy by taking advantage of the pool’s filtration system’s auto-regeneration feature. Once a day, the system turns on a pump to initiate a 10-minute regeneration process called the “pre-coat” cycle. The pressure induced by the pump causes particles of filter media, typically perlite, to attach to an array of flexible tubes.

After 10 minutes, a valve is opened to allow the pool water to enter the filtration chamber, pass through the tubes and return to the pool sparkling clean.

“The system regenerates the media automatically,” Hershey said. “During the filter pre-coat cycle, the controller uses the ‘jog’ speed feature programmed into the (drive) to reduce flow. The filter controller sends a signal to decrease pump speed during the daily pre-coat cycle. During those 10 minutes, the motors run at about 40 Hz. It’s not a long time nor a huge speed reduction, but the savings add up.”

By reducing speed to match the general flow rate and the pre-coat cycle requirements, the VFDs save the center $2,750 a year. As a result, the payback period for the VFD retrofit project was less than two years.

The new system provided operational benefits for Whisenhunt as well. “In addition to ramping pump motor speed up and down, the VFDs gave us a convenient remote start/stop feature,” he said. “For safety, a no-flow detection feature uses relay contacts to ensure no chemicals are fed into the pool water if the drive goes offline. Plus, everyone noticed that with the (drives), the motors are running much quieter than before.”

The VFDs’ circuit boards are sealed against the corrosive effects of chlorine. The internal cooling system separates the electronics from the air flow to protect the system from particles and aerosols. Protected by a National Electrical Manufacturers Association 4X housing, the drives are slightly smaller than the original soft-start equipment, providing more space in the pump room.

John Masters has been involved in various aspects of the water and wastewater industry for more than 35 years, including seven years in the design, construction and startup of wastewater treatment facilities. He serves as the vice president of sales, West Zone, for Danfoss Drives.