Design engineers responsible for hydronic heating and cooling systems are increasingly constructing their designs not on the basis of the type and efficiency of the boilers, or other key components. They are employing a new approach based on total system integration. In this expanded realm, the performance and efficiency of individual components are less important than the combined efficiency of all components operating together as an integrated system.

This new dimension for commercial hydronic system design relies on the merging of all system equipment, components and terminal units, and the piping network. Also, high-efficiency system-reacting pumps are playing an ever greater role as they integrate with building automation systems (BAS) and predictive controls based on current and future indoor and outdoor conditions. 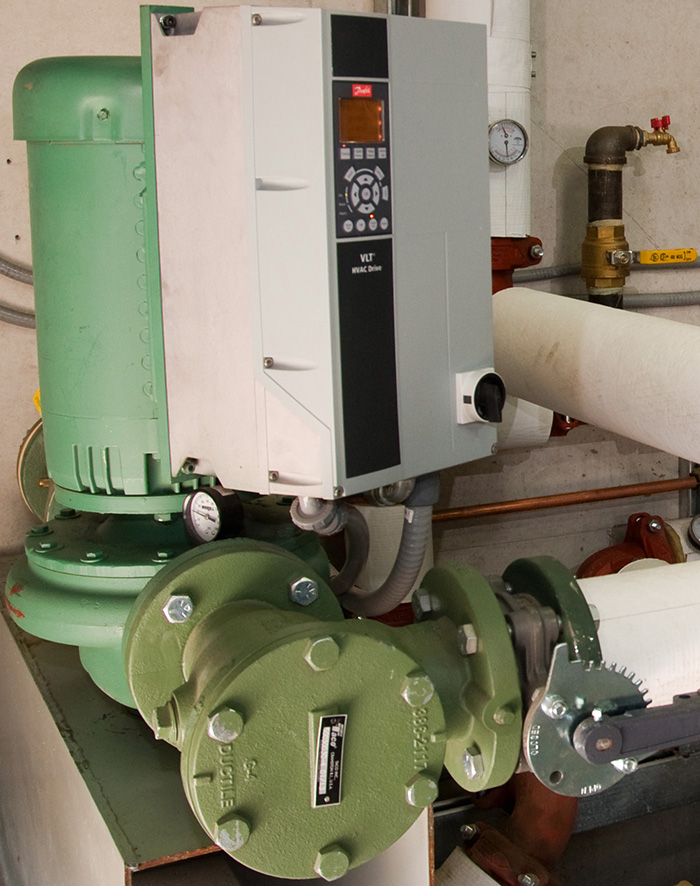 Technology has enabled this new “holistic” approach to system design. These technology enhancements include the expanding reach of self-sensing pumps, the introduction of variable frequency pump drives (VFDs) and electronically commutated motors (ECMs), and their integration BAS.

VFD pump technology has matured to state-of-the-art, and the cost of low-voltage VFDs continues to drop while reliability and functionality continue to increase. The most commonly used VFD is a voltage-source, pulse-width modulated frequency converter. In its simplest form, the converter develops a voltage directly proportional to the frequency, controlling motor speed and torque.

Controlling delta T (∆T) and matching capacity with the load are critical for making a system’s primary equipment more efficient, and that’s where variable speed pumping makes its contribution. When equilibrium is established between a system’s capacity, load and optimal ∆, maximum efficiency is attained. With new and responsive pump technology, designers can now strive for optimal system balance. Variable speed pumps are designed to track the load closely. VFDs reduce pump speed if the load varies.

By reducing pump speed to match the load, energy is saved and equipment longevity is improved. With variable speed, power is gradually increased: soft starts benefit the motor, pump and allied system components. With pumps performing optimally with VFD technology applied, system designers can configure systems with precisely prescribed ∆Ts to take advantage of the work a boiler or chiller can accomplish.

The result: chillers operate at optimal temperatures with smoother, longer run times, while boilers avoid short-cycling while firing at the lowest possible temperatures, based on demand. This means higher ∆Ts and terminal devices with more surface area—ensuring a lifetime of operating savings.

Variable speed technology has evolved to the point that drives and ECMs offer cost-effective solutions. Both technologies offer the intelligence for optimal operation, communication between smart devices, process control systems and diagnostics. 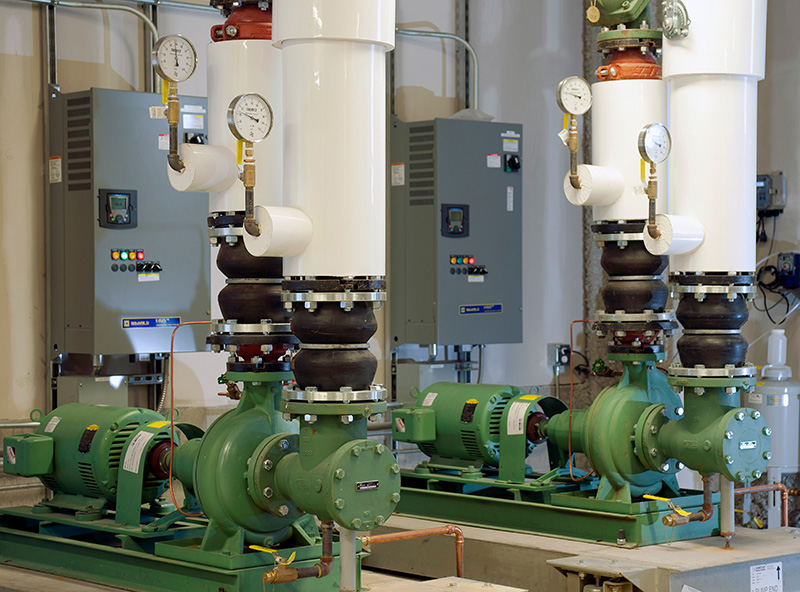 New efficiency standards established by the Department of Energy (DOE) in conjunction with the Hydraulic Institute’s working group have set the stage for ECM technology’s dominance of the commercial pump market in the years immediately ahead. ECM pump technology has built-in control strategies: proportional pressure control is prevalent in sensorless ECM pumps. Energy savings and noise reduction are achieved with proportional head regulation that also compensates for varying pressure drops as the demand for water changes, reducing as the water demand declines and increasing as water demand rises.

In the commercial market, ECM pump technology is emerging rapidly, with results thus far at least into the 15 horsepower size. Of course, because larger pumps with ECM technology offer the greatest energy savings potential, market interest is high.

To complete the system integration approach, designers today look to specification of a control system that will ensure correct system temperatures and flow rates to maintain optimal performance under all conditions. With the right BAS in place, all facets of the system are established to make system components function in unity. Terminal devices with sufficient surface areas assure high ∆Ts, and this translates to healthy advantages back at the central plant. Matching the variation in system loads is an issue of maintaining proper flow. There’s no better, more fitting challenge for today’s intelligent pumps combined with BAS controls.

The final component is a system “barometer” or diagnostic window, closely tied to the control system, that allows operators to observe energy use (and savings) in real time. Advanced BA systems permit this as they combine management of all system operation, and diagnostics, with predictive controls based on current and future indoor-outdoor conditions.

System designers have pursued total system integration for decades, but it took technology advancements in pumps, controls and diagnostics to make their quest a reality, even as individual components improved their efficiency ratings.

This approach has been compared to holistic medicine. Rather than treating a single symptom, doctors are now increasingly treating the whole person (or system).

Similarly, we can design, rebuild and repair hydronic systems for optimal performance—system health—because we now have the means, through advanced technology, to achieve proper balance and extreme energy efficiency.

Richard Medairos, P.E., is senior systems engineer and director of commercial training, Taco Comfort Solutions. He may be reached at 401-942-8000 or ricmed@tacocomfort.com. For more information, visit tacocomfort.com.