Figure 1 shows 12 circuits of a much larger cooling water system. Like all piping systems, the total system consists of the pump elements, process elements and control elements. Each circuit in the system has each of the three elements. To demonstrate, we will follow the circuit on the right side of Figure 1.

Figure 1. An example of the cooling water system described in this column (Courtesy of the author)

The circuit starts at the cooling tower, which serves as a pressure boundary and provides us with a location where the fluid energy is known. Because the cooling tower provides all cooling water for the system, it is shared by all the circuits in the total system.

Our example circuit continues from the pump discharge headers through a common supply header, then branches off to a common header for Area 51, where the system branches to process heat exchanger HX-101. Downstream of HX-101, the circuit continues with throttle valve TV-101. The throttle valve is positioned to set the rate through the circuit to the design flow rate. The circuit then proceeds through the various common return headers back to the spray header on the cooling tower.

In this system, the cooling water flow rate through each of the circuits is determined to remove the heat exchanger’s thermal load. This is accomplished using a temperature-control loop or by setting the position for all system throttle valves to a balanced position. The heat load in this cooling water system is constant so the system was designed using manually operated throttling valves.

What makes the process even more difficult is that changing the position in any circuit affects the flow rate through all circuits. As a result, the balancing contractor must arrive at a set of new valve positions after each pass and determine how they affect the flow rates through each circuit.

Early in my career, I was involved in manually balancing a cooling water system at a nuclear power plant. It took a team of more than 10 people about a week to balance the loads for all circuits to the designed flow rate indicated in the test procedure.

Recently, new loads were added to the cooling water system, and the flow rates through some existing loads were increased. As a result of the change in flow rate, the system was no longer balanced. After the addition of the new loads, the team decided not to employ the services of a balancing contractor. Once the cooling water system was placed in operation with the additional loads, the plant operators opened the throttle valves to increase the flow rate through the heat exchanger to maintain the proper outlet temperature. One thing the operators were not aware of is that each adjustment to a throttle valve in a circuit affected the flow rate in all circuits. As the operators continually adjusted the system, over time the flow rate through the system was much higher than the process requirements.

Figure 2 shows the pump curve for each pump when two circulating water pumps are supplying the system with all throttle valves fully open. Notice the flow rate through each pump is approximately 1,800 gallons per minute (gpm), overloading the motor. This resulted in the motor tripping on high current. 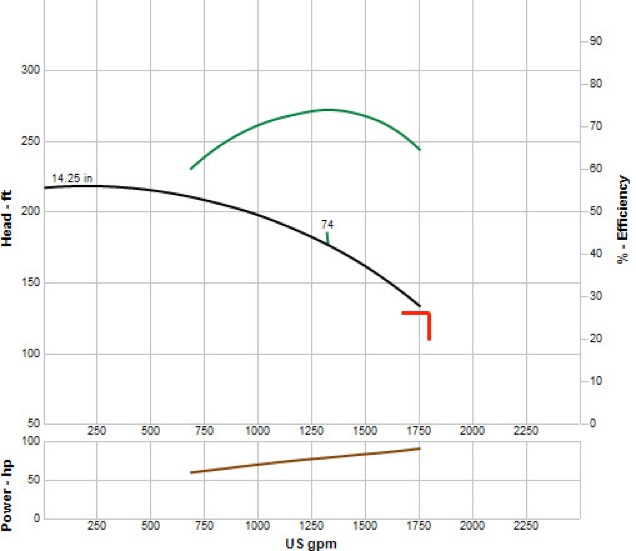 With three pumps in operation, the flow rate through each pump was reduced, but because three pumps were now operating, the system flow rate was higher. Figure 3 shows how a single pump operates when all three pumps are operated.

The pump curve shows that the head developed by the three pumps operating in parallel is 165 feet, with a combined total flow rate through the system of 4,400 gpm. The flow rate through each pump is operating to the right of its best efficiency point (BEP), but well within the motor’s duty factor. 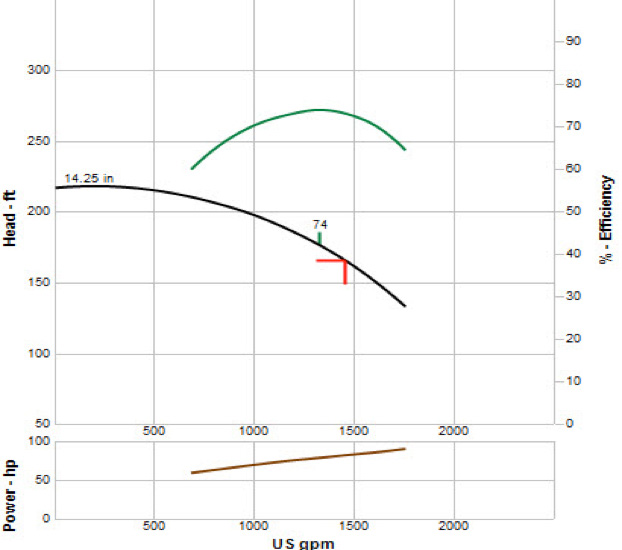 Figure 3. The pump curve for one of the operating cooling water pumps running after the third pump is operated

Looking at the pump curve, he could determine the flow rate through each pump would be 1,325 gpm, resulting in the pump operating close to its BEP. Next, the engineer had to determine if the pumps could deliver sufficient head for all the circuits in the system.

Setting the flow rate in the piping system model to the design flow rates and operating the model with two cooling water pumps revealed that the existing pump head was sufficient for the design flow rate through all the circuits. In addition, the model provided the calculated valve position of each throttle valve needed to balance the system.

The calculation performed using the piping simulation software was similar to the steps carried out by the balancing contractor. The software performed an initial guess of the differential pressure needed across the throttle valves to balance the flow rate in each circuit to the design valve. Once the differential pressures across the throttle valves were calculated, the software was able to determine the position of the control valve needed to balance the system.

The team decided not to change the position of the throttle valves when the plant was operating to prevent downtime. During a planned weekend outage, all the throttle valves in the cooling water system were set to the calculated position. To make sure the system was balanced, an ultrasonic flow meter was employed to validate the flow rate though each circuit with only two cooling water pumps operating.

The test results of the physical piping system matched the design flow rates, indicating that the system was in balance. The test showed that the flow rate was balanced, but to ensure all heat exchangers met the thermal transfer requirement of each circuit, an operation test was planned when the plant was back in operation.

By adjusting the throttle valve position on the two circuits that had problems with their heat exchangers, the plant engineer could determine how changing the flow rate through the two loads would affect the operation of the remaining circuits in the system. To accomplish this, he positioned all the throttle valves to the final position and performed a system simulation. The calculated results of the piping system model indicated that the calculated flow rates through each circuit were well within the range of system operation.

Pumps
Safe Chemical Processing Begins With Electrical Safety
Improve electrical workplace protection through familiarization with the NFPA 70E and proper training.
Pumps
Podcast: Virtual Reality in Infrastructure Projects
Hear how this technology can be used in pump stations.
Pumps
Preparing Well Water Systems for New Water Treatment Needs
New threats must be considered when maintaining infrastructure.
Pumps
Materials for Pumps in Cold Environments
Careful attention must be paid to the thermal expansion of selected materials.
Pumps
Pump Hydraulics Fundamentals: A Student’s View, Part 2
What would happen if the pump was selected not based on an incorrect system where these components were not accounted for?

Semiotic Labs
Replacing Metallic Wear Components with Composites in Centrifugal Pumps
Learn the basics of wear components and their role in system operation in this white paper.