Pearl Harbor Naval Station and Hickam Air Force Base have both grown around the historic port, known as Wai’Momi to native Hawaiians, adjacent to Honolulu on Oahu's south shore. Pearl Harbor Naval Shipyard (PHNSY), at Joint Base Pearl Harbor-Hickam, is a regional maintenance center for the Navy's surface ships and submarines. It is the only intermediate maintenance facility for submarines in the Middle Pacific. 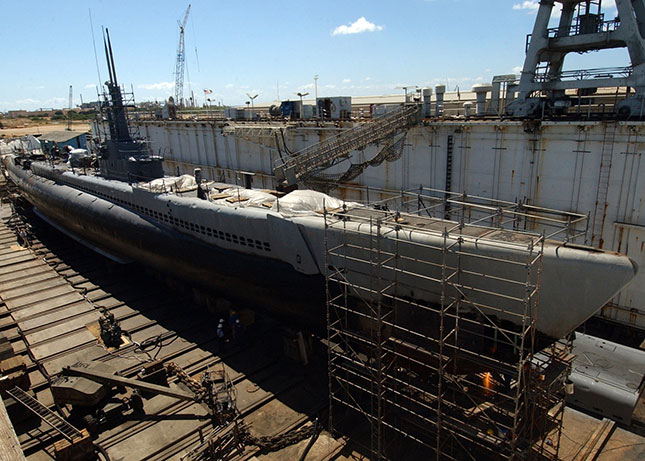 Three of the four dry docks at Pearl Harbor are in the Controlled Industrial Area (CIA) and are primarily used for repairing and maintaining nuclear submarines. These graving-style dry docks are comprised of a narrow basin with access to deep water through a floating caisson gateway. Dry Dock No. 1 measures 1,001 feet from the head side of the caisson, with a width of 114 feet at the bottom and 138 feet at the top, and a depth of 32 feet 6 inches from the mean high-water mark to the keel blocks.

To access the dry dock, a ship is floated into the basin. The caisson is positioned at the seaward side, and the dock basin is dewatered using large vertical turbine pumps. As the basin empties, the pressure of the sea against the caisson creates a watertight seal and allows the ship to rest on a dry platform. Dry dock operators manage this process, known as evolution, with a staff of engineers, electricians and operators who are responsible for the safe movement of equipment and water to ready the dry dock for ship maintenance and repair.

The CIA dry dock operation has been automated using supervisory and data acquisition systems (SCADA) from a software automation provider. The SCADA is primarily controlling a network of Limitorque actuators. The actuators are assembled on large gate valves, and the assemblies are known as motor-operated valves (MOVs). The SCADA communicates with the MOVs using redundant Modbus Internet protocol (IP) networks connected to a redundant gateway. A Modbus serial 485 loop connects the actuators with the gateway. Each dock is controlled by 19 MOVs with 16 input/output (I/O) points monitored and controlled per actuator. This fault-tolerant system opens and closes valves to precise percentages and adheres to specific dry dock operational valve position protocols for safe control of flow.

Dry dock operators are prohibited by the SCADA from performing valve movement until receiving the "ready for operation" indicator. This indicator is a synthesized status derived from monitoring multiple alarm points including power off, over-temperature, over-torque, jammed valve and other actuator alarm conditions. The software provider's event historian keeps an ongoing log of the control actions as an audit trail.

Previously, a system based on a different SCADA platform had been in operation for Dry Dock Nos. 2 and 3. Dry dock operations had not been satisfied with the safety, reliability and performance of the existing control system. These concerns prompted the discontinuation of that system and forced the dry dock operations personnel to go back to more labor-intensive, manual operations. Upon completion of the Dry Dock No. 1 project, the Navy was able to confirm that the reliability and performance issues were mitigated.

Most importantly, the software system eliminated the safety concern. While safety is important in any process, the large amount of water flowing through chambers at the dry docks puts personnel and shipyard workers in harm's way if not carefully controlled.

Subsequently, the shipyard elected to retrofit the SCADA in Dry Dock Nos. 2 and 3. A request for proposal (RFP) was issued for troubleshooting and upgrading the control system. The system integrator replaced the SCADA and was able to leverage the object-oriented reusability features of the software and minimize the bid cost by using common objects developed for Dry Dock No. 1. The retrofit for Dry Dock Nos. 2 and 3 was completed during just a few weeks in 2013.

Russell Risch, a PHNSY lead electrician for dry dock operations had the software configured to be identical to the previous Dry Dock No. 2 control system. It was important to avoid changing the operational processes to accommodate the new system and, instead, illustrate processes in the way the operators are certified.

"Our graphical display reflected exactly how our operations work, so that minimal operator training was required," said Risch. "It can be expensive and time consuming when processes change to accommodate new equipment and systems, particularly when technicians have to be re-trained and re-certified." Maintaining the previous system resulted in saved time and money for the Navy and the companies involved in the retrofit.