Older pumps, however, sometimes need to be modified to accommodate these enhancements because the newer parts may not be the same size and shape as the ones they are replacing. In these cases, a parts supplier can partner with an aftermarket engineering firm to come up with a long-term plan for revitalizing older pumps. The refurbished pumps can offer benefits including direct cost savings and a reduction in repair and maintenance.

In 2011, a field service engineer was at a pipeline station for service when a technician informed him that the company was considering overhauling all of its pumps as preventive maintenance. The company planned to investigate the possibility of upgrading mechanical seals.

The field service engineer and his team decided to analyze all of the user’s pumping stations from Illinois to Iowa—about 500 miles of pipeline. Every field service engineer who worked on the pipeline met in Cedar Rapids, Iowa, where a regional engineer led a meeting about what would be the best technology solution for this user. 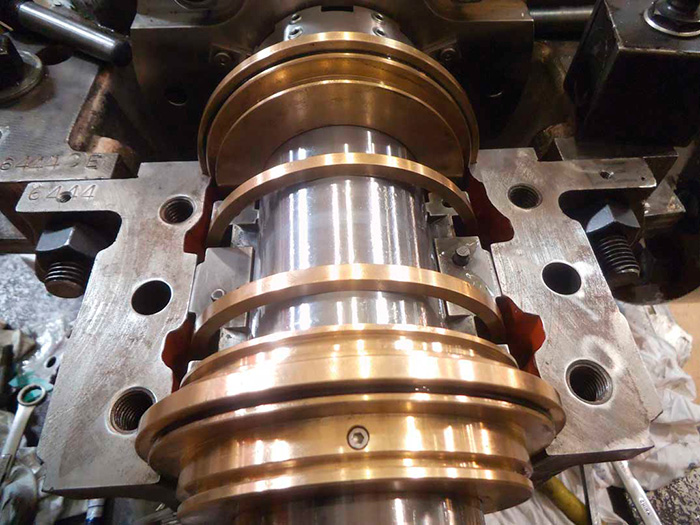 The field service engineers provided information on the pumps in their area, the seal data and the coupling information. All of the pumps would require minor modifications to accommodate these new seals. The team collated information about the pumps and wrote the necessary engineering projects for the preliminary drawings. Once the drawings were approved and finalized, the pumps were sent to a pump repair and service provider to be upgraded to accept the higher-technology seal.

The first pump to undergo seal upgrade resides at a mainline pump booster station for a 10-inch propane/butane pipeline that connects the user’s assets with Midwest markets, including Chicago. 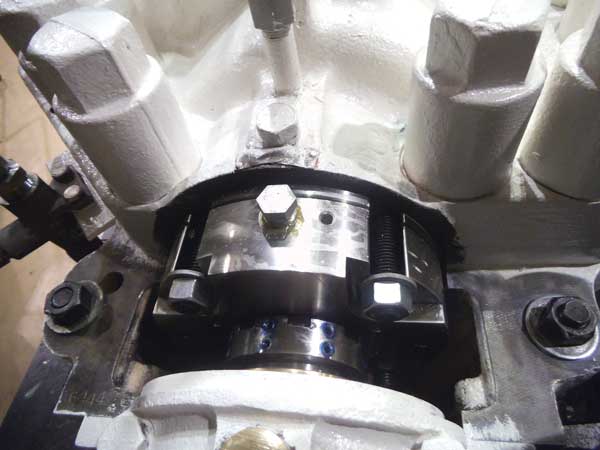 This Bingham 6 x 8 x 12.5, MSD, four-stage pump, which had been in service for a number of years, still employed a standard, traditional pipeline seal. This critical pump, which is used in a light hydrocarbon pumping application, requires maximum emissions control.

The suggested tandem seal provides necessary secondary containment that the single seal lacks. While the old seal has been the industry standard used in the pipeline business, in recent years, pipeline companies have begun to look at emissions controls, standardization and better seal performance.

The new seal—a larger, double seal—would fit in the pipeline station pump with slight modification. While the pump was pulled to complete this adjustment, the end user also desired a high-quality pump inspection
and repair to ensure the overall reliability of the complete pump.

As an added benefit, the user could simultaneously have the service provider assess the condition of each pump and carry out any additional repairs resulting from wear and tear.

The user’s reliability team worked with the seal company’s sales and engineering support group and the service provider’s management team to develop a comprehensive work scope. This required layout and specification of customized bearing isolator seals to fit the limited distance to the nearest obstruction.

In addition, the case required drilling for seal flush and drain connections to ensure cooling and lubrication of critical seal-face areas.

The repair and service provider also carried out a disassembly, cleaning and inspection (DCI) service, which identifies repairs, maintenance and upgrades that can be made to ensure optimal pump performance.

The repairs included manufacturing of a new shaft modified with improved material and geometry to reduce stress and equipment fatigue, as well as replacement of the wearing components with tighter running clearances.

These modifications were achieved by comprehensive inspection of parallelism, perpendicularity and concentricity of critical components as well as re-machining of the bearing housings. 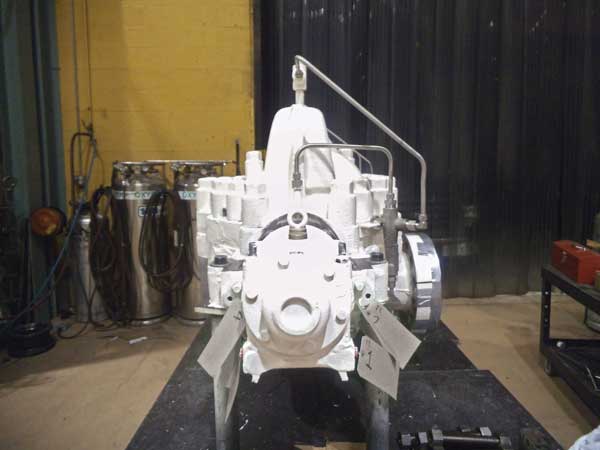 Finally, the individual impellers and the rotor assembly were dynamically balanced to 1W/N to achieve absolute minimum imbalance and vibration.

This joint effort between the seal manufacturer and service provider resulted in long-term success. The user’s rebuilt pump and upgraded seal have been in service since July 2013 without any issues or interruption in routine production.

The pump has been running flawlessly since 2013 and has been more reliable than the other pump at the station. The project represented the first of four pumps initially planned for conversion to the new seal design.

With the older seal-flush filter elements, the user had to maintain and replace them from time to time as they became clogged, typically implementing two complete inboard and outboard filter element changes a year. Filters with elements were replaced with cyclone separators. The new cyclone separators with the upgraded seal have not needed to be changed in the past three years of service.

The end user estimates a direct savings of around $20,000 per pump for each year the seals do not need to be changed.

Since the modification, the seals have needed to be changed only once, and this was because of a large slug of dirt dislodged by some pigging activities, resulting in an amount of debris too large for the separator to handle.

At the end of each pump’s upgrade, the user will possess refurbished equipment that will perform at a high level for many years.

Given the positive outcome for this first modification and upgrade, a second identical unit has recently been slated for the same service.

When two rotating equipment solution providers join forces to provide expert analysis and engineered solutions, the end user’s reliability and total cost of ownership can be improved with minimal downtime.

Ken Babusiak has held various positions in the pump industry for more than 40 years. Babusiak has served as vice president of industrial sales for Hydro Service Centers for the past 13 years.

Pumps
What Does Secondary Containment Mean?
For pumps, this term generally relates to sealless canned motor pump (CMP) or magnetic drive pump (MDP) types.
Pumps
U.S. Oil & Gas, Wasted Money & Strategies to Address Global Warming
Some European countries have made the switch from fossil fuels to renewable energy, but the U.S. is falling behind.
Seals
Podcast: How Diamonds Improve Mechanical Seal Reliability
Diamond seal technology can add value components in critical field applications.
Pumps
Using Piston-Actuated Diaphragm Pumps in Mine Dewatering
How these pumps are able to operate at higher efficiencies and pressures.
Pumps
Data Science as a Way to Extract Value From the Industrial Internet
Analytics can help organizations become more efficient.