ExxonMobil’s Hebron platform off the coast of Newfoundland and Labrador, Canada, in the North Atlantic is a massive structure. At 230 meters tall, Hebron operates in 93 meters of water and is attached to the ocean floor using a stand-alone concrete gravity-based structure (see Figure 1).

The structure contains more than 40 million cubic feet of concrete—more than what was used in New York’s Empire State Building. It is designed to store some 120 million barrels of crude oil and support 52 well slots. 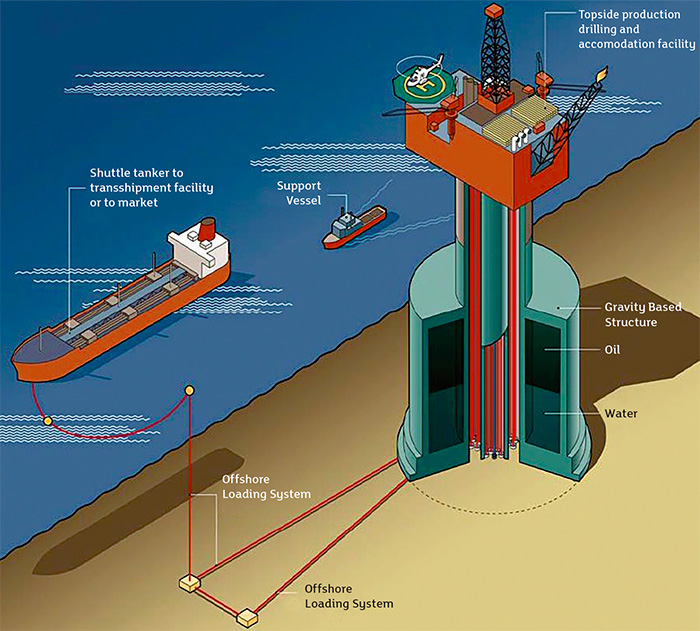 ExxonMobil and WorleyParsons, the design engineering company assigned to Hebron’s topside facilities project, understand the daily challenges of operating critical electrical equipment on an offshore platform that is exposed to high waves, ice, excessive moisture, changing temperatures, dense salt-fog and even icebergs. The salt-fog is one of the worst problems because the salt, combined with the moisture, can cause severe damage to the electrical insulation inside the critical motors and generators needed to operate the platform.

The most efficient method to combat these types of problems is to use internal space heaters along with automatic insulation resistance tester (AIRT) technology. The space heaters help to prevent condensation from forming on the stator coils and cables. The AIRT systems are used to constantly test and monitor the electrical insulation resistance (IR) levels to ground in the motors and generators when they are offline, detecting the first signs of insulation breakdown.

Traditionally, this type of preventative maintenance testing was done with a handheld megohm tester device, which was a time-consuming and dangerous chore for maintenance personnel.

Also, human error is a factor in manual IR testing, which requires maintenance personnel to access the inside of the control cabinets where they could be exposed to dangerous arc flash and electrical accidents.

ExxonMobil had implemented AIRT systems successfully on other offshore platforms, and the company enlisted WorleyParsons to design the same technology into the specifications for Hebron’s MV generators, the low-voltage (LV) standby generators and the critical MV pump and compressor motors. Powell Industries provided the switchgear, MV motor control centers (MCC) and system integration for the topside project. Powell had also been installing AIRT systems on offshore platforms for many years.

The AIRT manufacturer was chosen because its systems have the ability to perform the IR testing using a direct current (DC) test voltage that meets the IEEE, ABS and ASTM International standards for proper testing voltage. This DC testing voltage requirement can detect more problems in the earliest stages in order to prevent catastrophic failures. 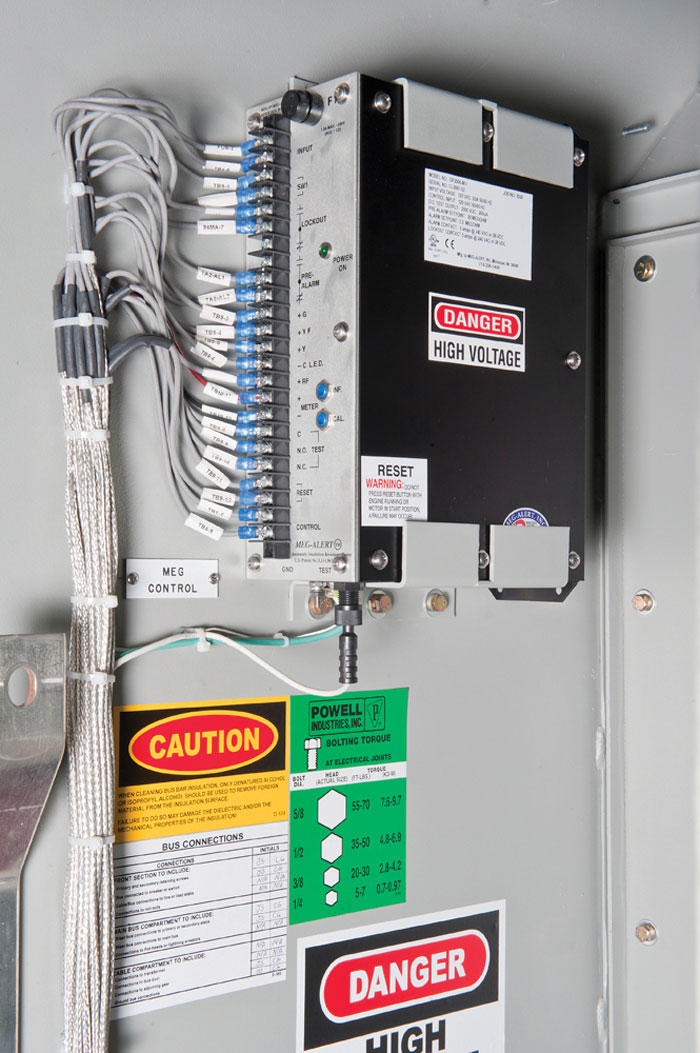 Image 1. The AIRT testing unit is located inside the high-voltage compartment of the motor control center.

The AIRT system consists of a testing unit, a megohm meter display, a remote-control alarm assembly, a high-voltage (HV) test lead and an HV fuse assembly.

The testing unit is located inside the high-voltage compartment of the MCC or switchgear and directly connects to the motor or generator windings (see Image 1).

The testing unit is connected using an HV test lead with a built-in current-limiting resistor that limits the maximum testing current to a safe level for the equipment as well as the personnel.

The megohm meter and the remote-control alarm assembly are located outside of the MCC or switchgear, normally on the LV door panel. The megohm meter indicates the real-time IR levels of the motor or generator windings and cables.

The remote-control alarm assembly allows maintenance personnel to view the alarm indicators and operate the testing unit without accessing the inside of the MCC or switchgear cabinet.

Some AIRT systems have a lock-out, tag-out power switch located on the remote-control alarm assembly in order to lock out the input power to the testing unit when hands-on maintenance work is being performed on the motors or generators (see Image 2). 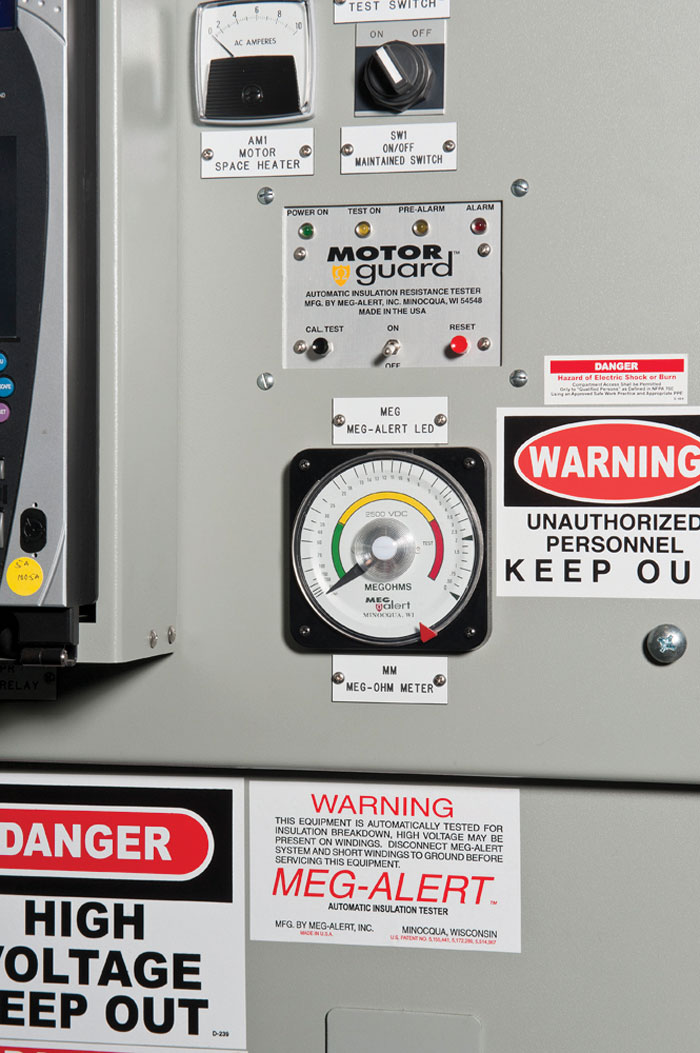 Whenever a motor or generator is offline, a dry contact or voltage signal is sent from the contactor or switchgear control circuit to initiate the IR testing.

The AIRT system will test and monitor the IR level continuously until the equipment is started again or the AIRT system is turned off.

This allows the motors and generators to be tested before every startup, which is the most common time for an electrical failure to occur.

Manual testing before every start-up is not practical. The AIRT system applies a non-destructive, current limited, DC test voltage to the phase windings and then safely measures any leakage current through the insulation back to ground.

The leakage current is then converted to megohms of resistance on an analog meter display that indicates good, fair and poor insulation levels. When the predetermined IR set point levels are reached, indicator lights will turn on to signal an alarm condition.

The low-alarm contacts may also be used to disable the start circuit to prevent the motor or generator from being operated if the IR level is unsafe for operation.

The technicians no longer have to access the MCC or switchgear control cabinet and be exposed to dangerous arc flash and electrocution accidents.

The AIRT systems also help prevent catastrophic equipment failures that can cause explosions and harm personnel.

Early-warning capability gives maintenance personnel the ability to take corrective action ahead of time and avoid a failure that would interrupt production. This ability helps maximize the reliability of the platform’s operations.

By preventing catastrophic failures, the AIRT systems can help extend the useful operating life of the motors and generators. 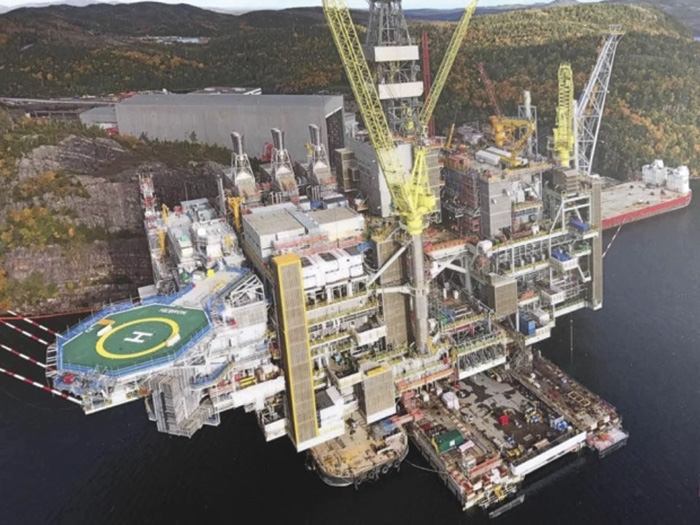 The AIRT systems save ExxonMobil money by helping prevent catastrophic equipment failures that would require a “rewind” repair or replacing the motor or generator. By detecting problems in their earliest stages, most repairs can be made in place.

Also, by preventing a catastrophic failure, it allows for a re-condition repair, which can be a 40 to 50 percent savings. ExxonMobil implementing AIRT technology assists with preventing costly equipment failures while increasing production reliability and personnel safety on the platform.

Richard J. Zelm is the founder and vice president of engineering for Meg-Alert Inc. in Minocqua, Wisconsin, a manufacturer of automatic insulation resistance testers for 23 years. He also owned and operated PEMCO Inc., an EASA motor and generator repair facility in New Orleans for 14 years.