The Positive Side of Waterhammer

by Joe Evans
01/22/2014
This article is part of our ongoing series on the history of pumps.

In 2008, I wrote a two-part article on waterhammer and how it can damage pumps and piping systems. It is the result of a change in flow momentum and is often caused by the quick closing of a downstream valve. The resulting shock wave can cause significant damage to the system. In one application, however, waterhammer is a positive event. In this application, a quickly closing valve allows waterhammer to supply the energy required to pump water.

The hydraulic ram was invented in 1796 by Joseph Montgolfier, co-inventor of the hot air balloon, and was awarded a British patent in 1816. By the 1820s, it was in widespread use in Europe and the U.S. During that period, it was considered one of the most significant inventions in the history of civilization.

Rams have been designed to pump more than 50,000 gallons per day (gpd) and produce discharge heads of 300 feet and higher. Typical rams available today range from 700 to 1,800 gpd for a 1-inch model to 1,000 to 10,000 gpd for a 3-inch model. Much larger models are also available. For end users who appreciate simplicity, the hydraulic ram is an eloquent machine, and its design has changed little since its invention. It uses the low pressure provided by a short length of downhill pipe and converts it to a much higher delivery pressure.

Figure 1 is a drawing of the original machine. Its operation is extremely simple. Water enters the ram from the inlet or drive pipe, flows through it and discharges through the upturned end on the left. Inside the horizontal body of the ram is an iron ball. The flowing water accelerates the iron ball which, in turn, moves with increasing velocity toward the discharge. Since the ball is too large to exit the discharge, it seats itself and acts as a quick closing valve. This produces a waterhammer effect that sends a high-pressure shock wave back toward the inlet. A portion of this high-pressure water enters the air chamber through a check valve and then makes its way into the discharge pipe.

When the pressure surge in the ram subsides, the check valve closes. The ball rolls back toward the right side of the ram, and the cycle starts again. This cyclic pumping action produces the characteristic beating sound heard during operation. The pumping phases are often referred to as acceleration, delivery and recoil.

A fairly large number of companies continue to manufacture large rams today. The modern ram follows the same principles as the original. As seen in Figure 2, the only difference is that the iron ball has been replaced with a waste or impulse valve. In the modern ram, water accelerating past the waste valve drags it until it slams shut. Again, a high-pressure shock wave is created that delivers high-pressure water into the air chamber. When the delivery check valve closes, the remaining water in the drive pipe recoils against it. This creates a low-pressure area that allows the waste valve to reopen. As with the original machine, the cycle begins again. 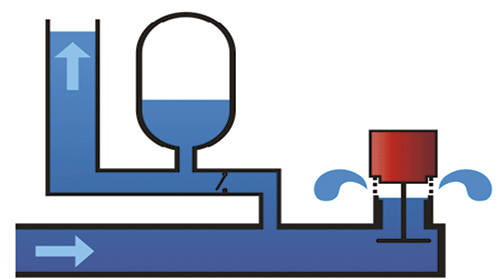 For almost 200 years, the ram has been a major player in water pumping. It has provided water for industries, farms and towns. The advent of the electric pump caused a decline in their use, but rams are on the comeback, and well they should be. They are a simple, low-cost and environmentally friendly way to move water uphill when a source of falling water is available. The so-called “waste” water is not really wasted. It simply returns to the stream or river from which it came.

Joe Evans is responsible for customer and employee education at PumpTech Inc., a pump & packaged system manufacturer & distributor with branches throughout the Pacific Northwest. He can be reached via his website, www.PumpEd101.com. If there are topics that you would like to see discussed in future columns, drop him an email.