Although power failures at pumping stations are rare, industry experts responsible for the safety and efficiency at these complex installations are not taking chances. They spend countless hours and costly resources to prevent any power outage, distortion or noise from disturbing the operation of the strategic equipment and processes at various installations throughout the world.

Studies by the U.S. Department of Interior’s National Petroleum Council have concluded that power failures would have significant impact on electric-powered pumping stations because most of them are entirely dependent on purchased electric power. “Power-dependent pipelines would experience a reduced rate of throughput in many of the pump stations along the system,” according to one report.

Thanks to today’s advancements in technology and digitally controlled instrumentation in all phases of the industry, the chances of power outages or even total shutdowns have been substantially reduced.

The primary reason is state-of-the-art uninterruptible power supply (UPS) systems. Because many pumping stations are located in remote and rugged environments, the UPS systems may not be in an enclosed facility or near other operations. These systems are often installed in rooms designed to house electronics and other switchgear. These rooms—the battery room, for example—may be climate-controlled and located on site close to some type of process control, lighting and/or safety system in a production facility.

Also, the installation may be exposed to wide temperature swings, humidity and even corrosive environments, resulting in more frequent failures that can be extremely costly.

Today’s pumping station installations are virtual computer centers, complete with large-scale integration (LSI) and very large-scale integration (VLSI) technologies, resulting in chips containing thousands of semiconductors and their interconnections. The power rating of these logic and memory devices has decreased while response time has improved tremendously. 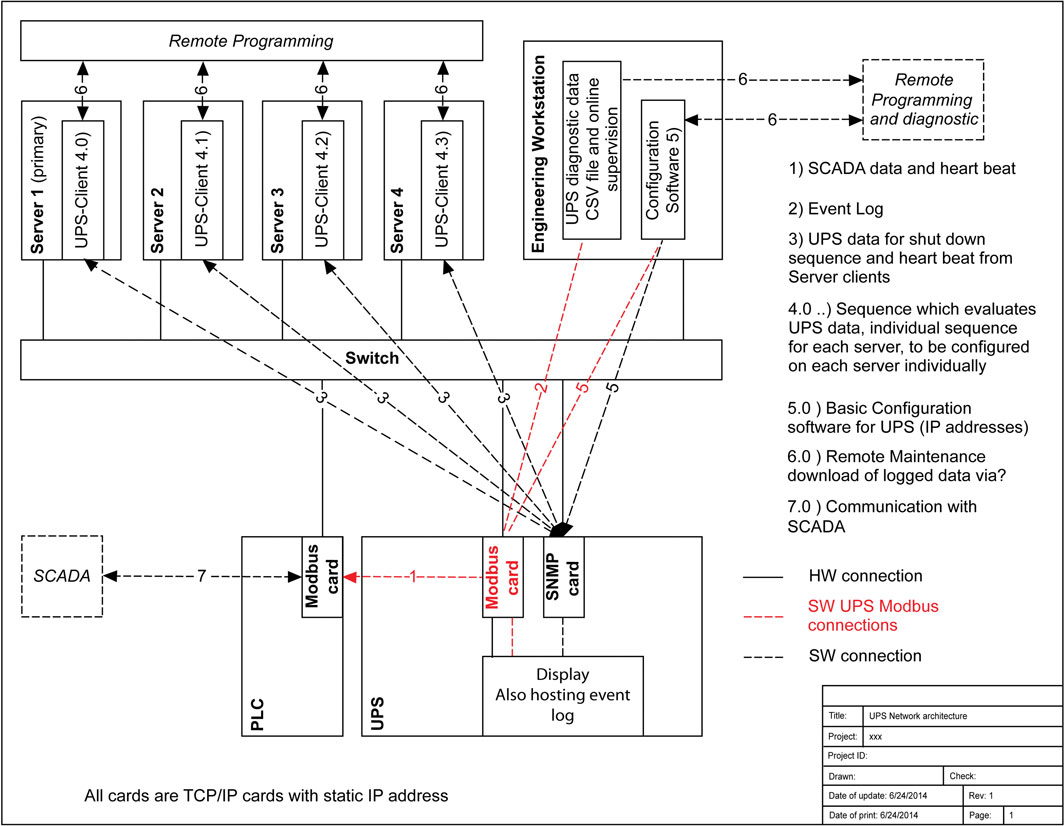 Despite their improvements, microprocessor-based computers and process-control systems remain extremely sensitive to power anomalies such as brownouts, blackouts, spikes and noise pulses.

While electric utilities make every effort to provide steady, relatively stable power, there is no guarantee of problem-free service. Therefore, a UPS system can act as an insurance policy against the consequences of unpredictable power.

Before determining the type, design and location of a UPS installation, engineers must analyze utility power. If the study indicates numerous power-quality problems, it is a strong case for power protection. Environment also can be a factor, especially if the area is prone to frequent electrical storms.

Within sophisticated industrial applications, such as pumping stations and other petroleum industrial environments, the power situation is dynamic. The many process controls, power supplies and other electric apparatus in use often produce their own power anomalies.

While power-conditioning methods, such as using regulation or isolation transformers, can solve part of these problems, only UPS systems can handle all of them. They help protect computers and power supplies from premature component failure caused by power surges and abnormal line harmonics (those greater than 5 percent harmonic distortion) and also help ensure that pump and valve systems operate as designed.

When a power outage or severe power quality deterioration occurs, pipelines and pumping systems must enter into safe network shutdown procedures. These protocols are controlled by various servers that monitor and control the system parameters; however, incidents take place when the systems do not operate correctly, even when the predetermined power-down protocols were followed. These malfunctions occur when the UPS batteries are drained of power, triggering a power loss in the backup batteries that causes failures in many, if not all, of the control systems deployed at a pumping station or pipeline control mechanism. These malfunctions are unacceptable since improper sequencing of pump valve shutdown protocols can lead to huge problems, including auto-shutdown valves failing to activate and, in the worst case, ruptured lines.

The latest UPS technology guards against these malfunctions, ensuring that the servers send the proper shutdown communications prior to and after a power loss. The newest software built into UPS systems more accurately monitors remaining battery life and controls server shutdown protocols based on real information of true battery life. It can provide the information needed to prevent system errors that cause the servers to lose power before commencing a shutdown of the pump systems. 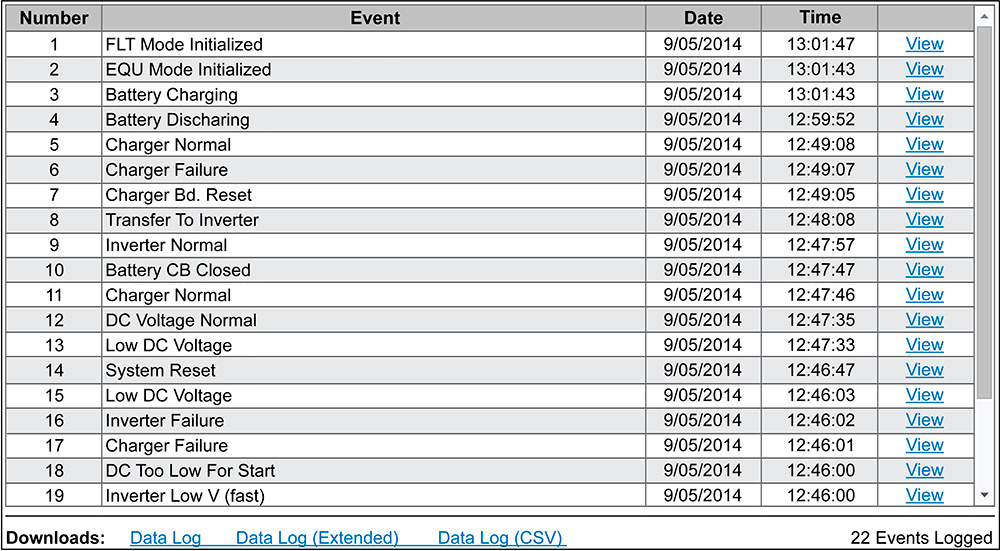 Figure 2. A data log gives UPS users the ability to check the status of the batteries, charger and inverter as well as other system parameters.

Oil and gas industry engineers who are responsible for specifying pumping station design and equipment must consider many factors when deciding which UPS systems are best suited to particular applications.

One of the first decisions to be made is whether an online or offline UPS is necessary. In an online system, utility alternating current (AC) is converted to direct current (DC) by a battery charger/rectifier and then converted back to AC with an inverter. True online systems are the reverse-transfer type, with the load powered from the inverter at all times, constantly regenerating a clean power source. In the event of a failure, the batteries instantly supply power to the inverter with a break in current and voltage.

An offline UPS, also known as a standby power supply, activates only when it senses a drop or loss of utility power. A power loss occurs during transfer, but usually it lasts for only two to three cycles. There is no power conditioning, however, since utility AC power is sent to the protected load during normal operation.

Online systems, which are more expensive, are generally used when complete protection from all power fluctuations and outages is required. These applications include most critical computers or control systems, such as those found in typical oil and gas pumping facilities.

Another factor to consider is the environment in which the UPS unit will be situated. The most commonly used UPS systems for applications requiring protection from heat, dirt, dust and other airborne contaminants are the industrial-grade models. They are designed to handle rough loads and harsh environments.

Finally, operational considerations are a key factor in deciding the most suitable UPS system for a particular application. Load size determines what size UPS is needed. Systems usually are sized in kilovolt-ampere (kVA) ratings. Before selecting UPS capacity, a profile of critical electrical loads should be calculated, listing the power requirements of each piece of equipment that is protected. Most UPS manufacturers also recommend allowing a 25 to 30 percent future expansion factor. Most systems are available in both single-phase and three-phase models to suit the application.

Users should also consider the types and size of loads being protected. Microprocessor-based equipment may require a different type of UPS unit than other linear loads. For example, switching power supplies, found in most computers, react differently to certain types of UPS systems. Today’s UPS units should be capable of supplying nonlinear-type loads without derating or degradation in total harmonic distortion.

William Fox is the senior design engineer at AMETEK Solid State Controls in Columbus, Ohio. His industry experience spans more than 30 years, including the past eight years with AMETEK. He previously served in key engineering positions with Vanner, Encore Networks (formerly Fastcomm Communications), Lockheed Martin and IBM. Fox holds an BSEE from Clemson University as well as an associate of science degree in electrical engineering technology from Greenville Technical College.

John Ely has more than 18 years of experience in industrial and consumer marketing. He serves as marketing director for AMETEK Solid State Controls, a manufacturer of customized inverters and UPS systems. He has master’s degrees in marketing and communications, a bachelor’s degree in technical management and an associate’s degree in electrical engineering. He also is a professor of marketing at Franklin University in Columbus, Ohio, and has authored several articles on business development.