Gasket blowout is the most catastrophic of gasket failures. It usually occurs with no discernible warning and causes a sudden and significant release of internal pressure, usually accompanied with loud popping sound or whistle. Depending on the process being contained and/or the amount of stored energy at the time, the result can be fatal.

Part One of this two-part Sealing Sense series brings attention to the balance of forces present at the potential moment of gasket blowout and provides guidance on how to protect against this type of gasket failure. Equations are provided to assist with evaluating these forces and results are presented to show that to protect against blowout, clamping force can be significantly more important than gasket tensile strength.

For the purpose of this article, Figure 1 identifies the general condition of potential blowout. It shows an axial “cut” across the thickness of the gasket and the three general forces affecting blowout. Equation 1 provides the force balance in the radial direction. The potential condition of blowout is taken when the sum of these forces is equally balanced. That is, the forces holding the gasket in place and together is equal to the outward force trying to dislodge or damage it.

Figure 1. Forces on a gasket

These three forces give a general descriptive condition of blowout, but do little to identify the components upon which they are dependent. Equation 2 provides greater detail to draw attention to these components.

FClamping has been subdivided into four components. These components are defined as follows:

FBtot = The total initial force on the gasket created from tightening the fasteners to a prescribed target torque
FGrelax = Loss of compressive gasket stress because of time, temperature and load effects
FHyd = Force resulting from hydraulic load being contained
FOther = General collection of other effects that reduce or increase the clamping force

Fhyd and FOther, though normally negative, can be positive and help prevent blowout.

Table 1 lists common conditions that should be considered when evaluating each force. The reader is cautioned that this is only a partial listing. The intent is to bring attention to the type and number of factors that can affect the force balance. 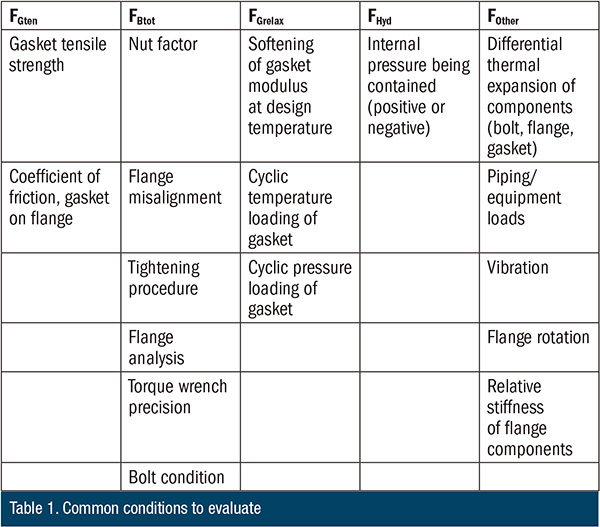 Equation 3 provides a further redefinition and rearrangement of terms that allow the potential blowout pressure to be evaluated directly. Example values are supplied for a 2-inch, Class 150, ASME B16.21 ring gasket.

A way to trial different values to inspect their potential effect on PBO is available. It will be used to test the general belief that gasket tensile strength is always a major factor in preventing gasket blowout. To investigate, two series of calculations are evaluated to the resulting value of PBO.

The first series is performed by holding all values fixed, except σtg. Its value is progressively reduced in 5 percent increments. In the second series, all values are held fixed except, FOther. This shows the potential effect of an axial piping load or axial flange misalignment that tends to separate the flanges. Its value is progressively increased in 5 percent increments. The results are plotted in Figure 2. 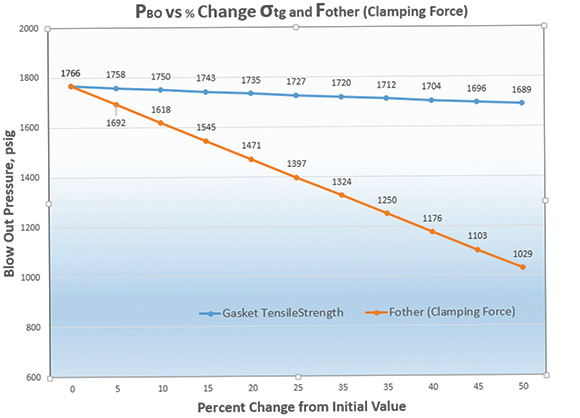 A review of Table 1 shows a significant number of conditions that can negatively impact blowout pressure. Developing values for these factors can often be a challenge. Next month, Part Two of this Sealing Sense series will investigate two strategies to help make this challenge manageable.