Coming to market in August 2010, AirVantage Energy Saving Technology is used on air operated double diaphragm pumps (AODD), which are industrial pumps that employ the use of a twin diaphragm system for positive displacement to move liquids. Important specifications for diaphragm pumps include maximum discharge flow, maximum pressure discharge, inlet size, discharge size and media temperature. Power sources are primarily pneumatic or hydraulic and incorporate the use of compressed air or natural gas.

AODD pumps with AirVantage® Energy Saving Technology are equipped with a microprocessor that is adaptive and continuously manages the amount of air volume required to operate the pump at the desired flow rates. This technology determines the optimal diaphragm rod velocity and relays the information to an air distribution valve at the air inlet location of the pump. The valve acts as a gated air management system, allowing only enough air to enter each inner pump chamber. Diaphragms perform at their optimal operating point, with less air consumption. As the pump experiences air inlet fluctuations or other changes that affect air flow, the system adapts to optimize the pump’s performance.

AirVantage uses existing air flow to provide its own electricity and power to the device. This eliminates the need for batteries or hard wiring. No training or special set up is required to operate the energy saving technology, which installs in the same way as traditional AODD pumps.

This product was tested at 20 manufacturing facilities during an 18-month period. During these tests, Warren Rupp validated that AirVantage saves up to 50 percent air consumption over competitive pumps when applied to heavy flow applications. This information was validated by SCFM meters and recorded on data-loggers within these facilities.Pumps & Systems for the purposes of this article). These comparisons are indisputable when comparing published data sheets.

AirVantage has also qualified under the Iowa Custom Energy Rebate Program as an energy saving technology where the utility (MidAmerican Energy) has committed project funding to install the equipment.

The Saint-Gobain Grains and Powders Manufacturing facility took on a 30-day energy savings challenge. The facility reduced its energy costs by 23 percent at its fluid separation points, the most process-critical applications within the facility, according to Rick Klok. They perform several functions and run 24 hours per day, seven days per week.

“Over this period of time, AirVantage reduced our air consumption by 23 percent while maintaining our desired flow rates,” Klok says. “It was simple. All we did was install the trial AirVantage pump, and it did the rest, optimizing our energy consumption without special handling or monitoring. As the pump application switched from batch transfer to recirculation to fluid separation, the AirVantage self-adjusted to the pressure drops and changing condition-points all by itself, using just the right amount of compressed air to operate our pump.

“We were surprised to learn that we can save as much as $1,200 in energy costs and increase our air compressor capacity by 2.5 horsepower per pump,” Klok says. “We were very satisfied with the performance of the new system, and we plan to use AirVantage on all [our] AODD pumps in the future.” 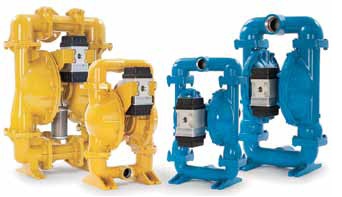