During the last 20 years, the demand for freshwater in the Middle East and North Africa has increased significantly—particularly because this is one of the world’s most arid regions. Larger seawater reverse osmosis (RO) desalination plants have been built to meet the demand.

Most of these large facilities have opted for open seawater intakes. Beach-well and infiltration galleries, traditional for smaller systems, have become impractical for the large flows. With proper intake and filtration design, these open intake systems have reliably produced low-salinity water throughout the world.

Traditional open intake RO systems do suffer from one flaw: They are susceptible to harmful algal blooms (HABs). Severe HABs can exceed millions of cell counts per liter and can severely limit plant capacity through rapid filter fouling—or stop production altogether. Near constant filter backwashing prevents the fouling, but leads to poor-quality water being sent to the RO system.

HABs have become more common worldwide during the past 30 years. However, the international community rarely pays them attention. The blooms often occur where infrastructure or industry does not heavily rely on desalination.

A severe bloom struck the Gulf of Oman and Arabian Gulf in 2008-09 and brought HABs global attention. The algal bloom began off the coast of Oman and gradually spread as far north as Saudi Arabia, lasting for three to four months in some areas. This bloom shut down many of the municipal water treatment plants, power facilities and refineries that rely on RO, resulting in a huge negative economic and social impact on that region. 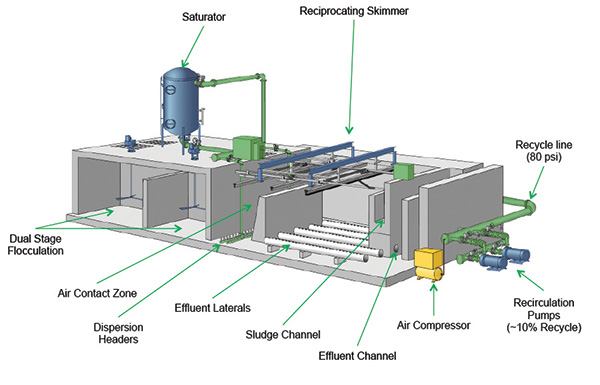 Dissolved air flotation (DAF) pretreatment for open intake facilities can combat HABs. DAF clarifiers have been applied to algae-laden fresh water reservoirs and water treatment systems since the mid-1960s. During the DAF process, millions of micro-bubbles float the algae from the water. The system flocculates the algae into a small micro-floc adding a ferric-based coagulant, such as ferric chloride or ferric sulfate. These small micro-flocs are then mixed with millions of micro-air bubbles. 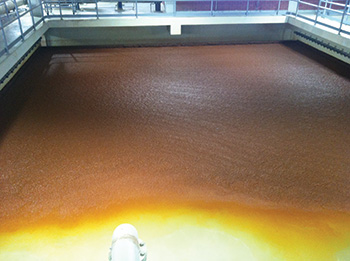 A thick blanket of algae during a bloom floats on top of a DAF basin.

The bubbles provide buoyancy to the algae-laden floc, which is floated to the surface of the DAF basin. A mechanical scraper system intermittently skims the floated material from the basin’s surface. The effluent water is then taken from the bottom via a set of perforated collection laterals.

Generating the micro-bubbles is a simple process. A percentage of the clarified effluent water from the DAF system is pressurized along with air in a small saturation vessel. The vessel is similar in appearance to a vertical pressure filter. The air is dissolved into the water under pressure to achieve saturation—typically 500 to 800 kPa depending on saturator design. 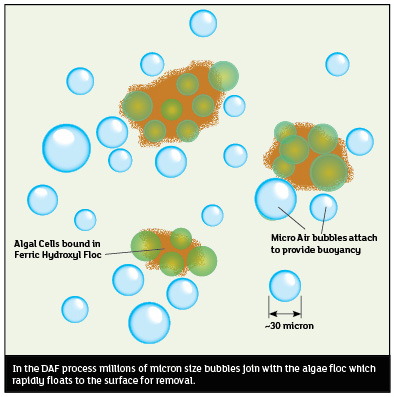 During the DAF process, millions of micron-sized bubbles join with the algal floc rapidly floating to the surface for removal.

The saturated water is then released into a mixing chamber via a set of dispersion nozzles that span the basin’s width. The rapid pressure drop, as the water exits the nozzles and air comes out of the solution, creates millions of micro-sized bubbles.

Algae migrate through the water column to absorb sunlight and nutrients in the sea. They are naturally neutrally buoyant to allow this movement. The DAF process effectively removes algae because only a few micro-bubbles are needed to provide the buoyancy that brings the algae rapidly to the surface. The process quickly separates the highly buoyant bubble and algal-floc agglomeration, leading to high surface loading.

Most DAF systems are being designed for a loading rate of 20 to 30 meters per hour (m/hr) in the separation zone. This leads to a very small footprint for the system. Smaller footprints are critical in today’s desalination facilities because only small areas are available for their construction. 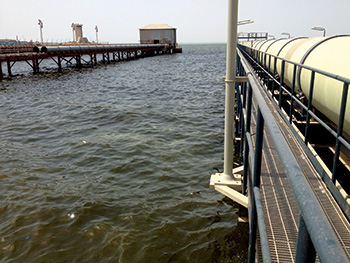 A bloom has turned the water at a desalination plant intake a dark greenish-brown hue.

The DAF process produces a low percentage of residuals with a high percentage of solids. The floating DAF sludge dewaters over the basin before being removed and can regularly achieve sludge solids of greater than 3 percent dry solids concentration (DS). This low flow/high solids concentration eliminates the need for a thickening process prior to dewatering and reduces the expense and size of a residuals handling system.

Many Gulf countries have mandated DAF pretreatment for all new seawater reverse osmosis projects that use open intake systems. However, seawater DAF applications are still in their infancy, dating back no more than 10 years. Of the few plants operating DAF for pretreatment in the Gulf, only one has borne the impact of an HAB: the Shuwaikh Seawater Reverse Osmosis Desalination Plant in Kuwait.

The Shuwaikh facility incorporates a DAF system and a pressurized inside-out ultrafiltration (UF) for pretreatment. The pretreatment capacity is 350 million liters per day (MLD) with an RO output of 94.7 MLD. The plant is located next to the Port of Shuwaikh, which accommodates the majority of the country’s shipping. 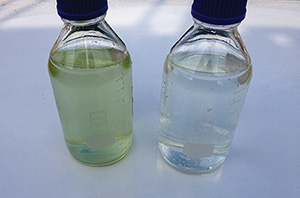 Samples of raw seawater and DAF effluent are compared side by side. The seawater has been supplemented with 100 million cells/L of algae.

The system was designed prior to the 2008-09 bloom in the Gulf. The design protected the downstream UF and RO from potential contamination due to the heavy shipping traffic. The site’s small footprint required a high-rate pretreatment system capable of dealing with any contamination from the shipping traffic, such as oil and grease, and suspended solids removal due to the shallow, near-shore intake.

The plant was commissioned in October 2011 and was the first operational DAF system in the Gulf. The plant site did not have a history of severe reoccurring HAB events, but in April 2012 and April 2014, localized blooms near the port occurred. Turbidities of greater than 30 nephelometric turbidity units (ntu) were seen in the source water, indicating a substantial bloom. These blooms came on without warning, but lasted only about 10 days. The algal growths quickly exhausted their nutrient supply.

Minor changes to the plant’s chemistry accommodated the increase in organic loading. The coagulant feed was increased, and the coagulated pH was decreased with sulfuric acid. The changes allowed the plant to maintain capacity throughout the bloom’s duration, ensuring the uninterrupted supply of potable water to the residents.

The DAF process performed well throughout the Shuwaikh blooms; however, the severity of the bloom, type of algae and system algae removal were not determined. Multiple HAB species have been cultivated at Woods Hole Oceanographic Institution for DAF pilot and bench scale testing. These species included Cochlodinium polykrikoides, the most prevalent algal species identified in the 2008-2009 bloom in the Gulf.

Researchers and engineers investigated coagulation techniques to lower the high charge neutralization demand from the millions of algae cells. Oxidation with sodium hypochlorite (typically less than 1 milligram per liter (mg/L)) and adjustment of the pH prior to coagulation are promising techniques. These techniques proved to lower the coagulant demand while improving the cell removal percentage. They were tested on a naturally occurring 14 million cells per liter Cochlodinium bloom in Buzzards Bay, Massachusetts, in 2011. More than 99 percent of the algae were removed with the DAF process.

An algal removal challenge for the Fujairah I expansion in Fujairah, UAE, tested the effectiveness of the DAF design. A pilot with up to 100 million cells per liter in the source water required cultivated algae because the concentration was four to five times the 2008-09 bloom. The DAF pilot consistently removed more than 95 percent of the algal cells and at times exceeded 99 percent removal. The DAF pilot was followed by a gravity media filtration pilot that used the current plant’s media profile. When the algae were introduced to the DAF system, the downstream filtration system’s silt density index (SDI) actually improved, and filter head loss accumulation decreased. The algae most likely acted as a sweep floc to incorporate colloidal material in the source water.

Several pilots have also been conducted on naturally occurring blooms, including a pilot at the University of Texas Marine Science Institute at Port Aransas, Texas, during a Karenia brevis bloom. Another pilot was conducted on the Antofagasta Bay in Chile, which experiences a prolonged HAB yearly. The bloom lasts up to three to four months because of the bay’s currents, which serve to feed nutrients to the algae continually during the summer months. This prolonged bloom tends to spawn a growth of many varying algal strains.

Each pilot test indicated that the DAF process would be equally effective on different algal strains. The process stands as a tested tool for pretreatment where an uninterrupted supply from open intakes systems must be ensured. The demand for freshwater sources will push the evolution of desalination and related technologies in the world’s driest regions.

Red tides were discovered near the UAE in August 2008. The tides were later observed off the coasts of Qatar and Iran. By spring 2009, the algal bloom spread from the Arabian Gulf through the Strait of Hormuz into the Gulf of Oman. At its height, the algal bloom stretched across 1,200 kilometers of coastline. Concerned that the bloom would damage reverse osmosis membranes and red tides would enter filtered drinking water, officials halted operations at desalination plants. The bloom, with cell counts in the tens of millions, killed thousands of fish. Source: Abu Dhabi Water & Electricity Authority and other reports

Robert Wiley is the principal engineer for Leopold’s Clarification Products and has spent the last 10 years working with the development, commissioning and design of the Leopold Clari-DAF System. He can be contacted at +1 724-453-2135 or bob.wiley.iii@xyleminc.com.