Grinder manufacturers adapt for a new environment.
by Kevin Bates
11/28/2017

Oil and gas drilling and processing operations are arguably one of the harshest industrial environments into which any equipment can be deployed. These can be high risk and high reward operations with success and profitability closely linked to maximizing equipment uptime to maintain a consistent throughput of production. This performance is imperative within the oil and gas industry, which relies heavily on the movement of fluids in closed systems and can be slowed or brought to a standstill due to a clogged pump or valve.

Crude oil refineries and drilling sites are especially at risk because of the high solids content of slurries moving through these operations, particularly relating to storage tank bottom cleaning at refineries and the reclamation of drilling fluids at the drill sites. Pumps, centrifuges and liquid-solid separators, critical to keeping production moving in these operations, are subjected to extremely demanding industrial conditions under a constant onslaught of hydrocarbons like paraffins and asphaltenes and inorganic solids like rock, sand, rust and heavy metal oxides. Consequently, this equipment experiences a high incidence of interruption and repair, impacting production throughout as well as operational costs. 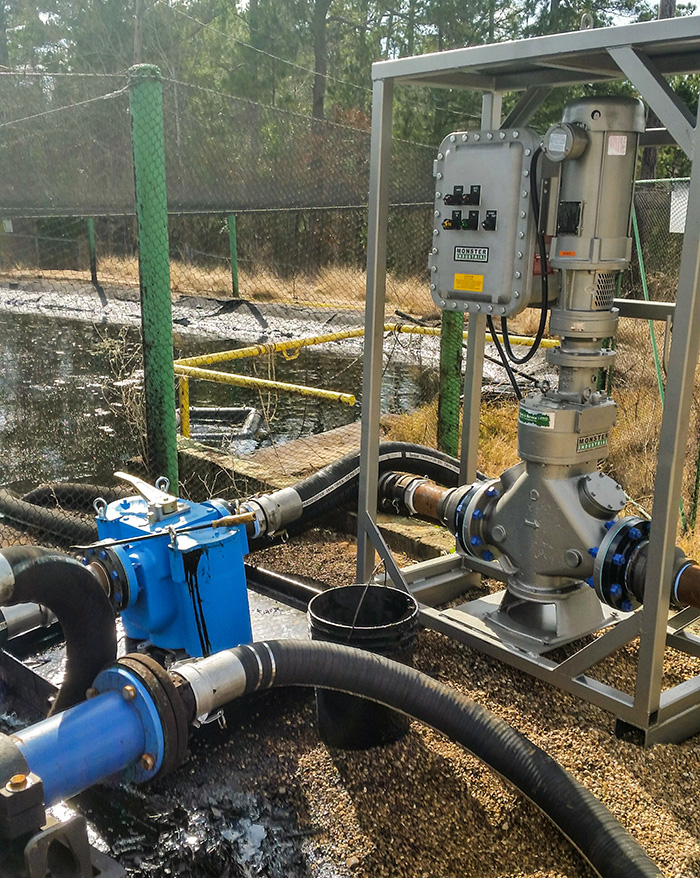 Image 1. Crude oil drilling sites are at risk due to high solids content of slurries. (Images courtesy of JWC Environmental)

Increasingly, drill sites and refineries are now relying on powerful in-line, two-shafted grinders to protect their pumping systems as well as costly downstream processing equipment. These grinders are powerful enough to grind down rocks, wood debris and paraffin sludge to ensure pumps do not clog and that liquid-solid separators and centrifuges receive properly-sized content for separation. This enables them to operate at optimum throughout without interruption.

One of the most challenging issues for refineries is the development of methods to minimize the cost of removing and disposing of crude oil sludge in storage tank bottoms. Crude oil sludge from storage tanks is a multiphase water/oil/solid composite, composed primarily of heavy hydrocarbon deposits, paraffins and asphaltenes and possessing a semisolid physical state. It is produced under normal storage conditions by the gradual sedimentation of heavy oil components, varying in consistency, density, thickness and composition across the whole tank bottom. Inorganic solids in the crude oil, such as clay, silica, calcite and corrosion-produced residues contribute to this process, bringing more hardness and higher density to the deposit. The accumulating sediment compacts, resulting in a thick layer of sludge, which is difficult to remove. The sludge can accumulate many feet in depth and up to 100,000 barrels in volume, which causes a gradual reduction in the tanks’ storage capacity, and uncertainty of available volume.

Refineries have inspection policies to verify the integrity of tank seals, flooring and roofs. To perform these periodic maintenance and inspection programs, the sludge must be removed. Tank cleaning, in the traditional sense, has involved opening or cutting a hole in the tank to remove the sludge, which is then openly transported to shaker screens, fed through a liquid/solids separator or centrifuge to reduce the volume of sludge waste, and subsequently transported to an off-site location. 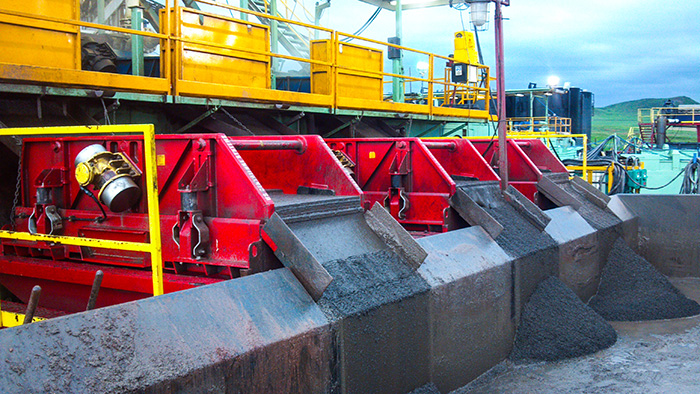 This process, however, has come under scrutiny. Frequent throughput interruptions, in part caused by malfunctions with shaker screening systems, add time to an already lengthy method. Because it is a process open to the environment, sludge spills do occur, and volatile hydrocarbons are able to evaporate. This raises issues with plant emissions, which in some states has caused the process to be restricted.

In response to these concerns, the petroleum industry has developed better, safer, faster and less expensive methods for tank cleaning, allowing tank bottom hydrocarbons to be recovered and recycled back into the refining process. These systems are overwhelmingly closed-loop processes where, once removed, the hydrocarbons are recovered via enclosed external systems, such as centrifuges and liquid-solid separators.

Many of these closed-loop systems are designed to improve throughput efficiency by reducing the size of solids in the slurry-sludge solution to protect downstream pumps, valves, centrifuges and liquid/solids separators.

“In a closed-loop system for cleaning crude oil tanks, everything in that tank exits through a pump, before going to a centrifuge or liquid/solids separator, and then gets pumped back again into the tank under high pressure,” said Charlie Gioielli, industrial markets manager with Hahn Equipment in Houston.

“Crude oil sludge is hard, it crumbles, it settles fast, and it is abrasive. The pumps are producing in the vicinity of 1,500 pounds per square inch (psi), a lot of pressure that is being pushed through a relatively small passageway. Anything of size that gets in that passageway can block it and cause the pump to fail. That stops the throughput dead, right there, until it gets declogged, or if necessary, the pump repaired or replaced.”

“The solution to prevent the pump from clogging is to install an in-line grinder before the pump. We recommend dual-shafted, slow-speed, high-torque grinders that can handle up to 6,860 gallons per minute (gpm) and easily shred the toughest hydrocarbons, rust, rocks and whatever debris might come through from the tank.”

The grinders serve a dual purpose. Not only do they protect the pumps from clogging and damage, but they provide a consistent particle size for optimum centrifuge performance. Randomly too big and too small particles inhibit their performance.

“Centrifuges are used frequently in these closed-loop systems,” Gioielli said. “The more consistent the particle size, the faster they can be fed the sludge for separation, which reduces the overall time required for tank cleaning and hydrocarbon recovery.”

Drilling fluids (drilling mud) are integral to the drilling process, serving to lubricate and cool the drill bit, as well as convey the drilled cuttings away from the bore hole. These fluids are a mixture of various chemicals in a water-based, oil-based or synthetic-based solution. Drill cuttings are broken bits of solid material that are produced as the drill bit breaks the rock. Drill cuttings vary in size, ranging from fine silt to gravel.

For both environmental reasons and to reduce the cost of drilling operations, drilling fluid losses are minimized by stripping them away from the drill cuttings before the cuttings are disposed of. The drilling fluid is often reused.

On drill sites, the systems used to reclaim mud are considered critically important to the process throughput and efficiency of the operation. Mud reclamation is primarily accomplished using shale shakers with vibrating screens to separate the mud from the shale, with subsequent processing of larger drill cuttings with centrifuges. 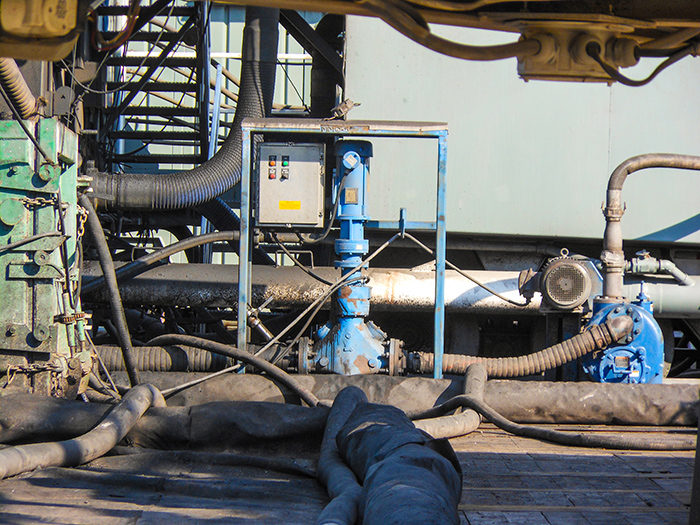 Image 3. Drilling fluid losses are minimized by stripping them away from drill cuttings.

The mud passes through the screens and is collected into mud tanks. The drill cuttings remain on top of the shale shaker screens.

The vibratory action of the shakers moves the cuttings down the screen and off, where they can be collected and stored in a tank or pit for further treatment or disposal.

The separated drill cuttings, which were not sifted through the screens but still coated with a large quantity of drilling mud, are slurried and pumped to centrifuges for separation. Since centrifuges perform better when the particle size is consistent, solids control companies are starting to use 2-shafted industrial grinders to break down the cuttings to a specific size to maximize throughput rates.

Centrifuges spin at a very high G-force, and particles that are too large will wear the throat of the centrifuge more rapidly. The employees responsible for solids control at one site found that when they ground up the big cuttings into small pieces there was more surface exposure, and they reclaimed more mud. That is an important point, because it increased their mud return by about 100 percent. This helped them drill faster and get on and off the rig sites in less time. It has really pushed the efficiency of these drill operations.

These grinders will get from three months to a year grinding solid rock before the cutters need to be replaced. That outperforms any other equipment for this purpose. Plus, they provide complete protection for downstream equipment, like pumps and centrifuges.

With the increasing use of two-shafted low-speed and high-torque grinders being employed to protect pumps in petroleum-related applications, the suppliers of grinders have been adapting. 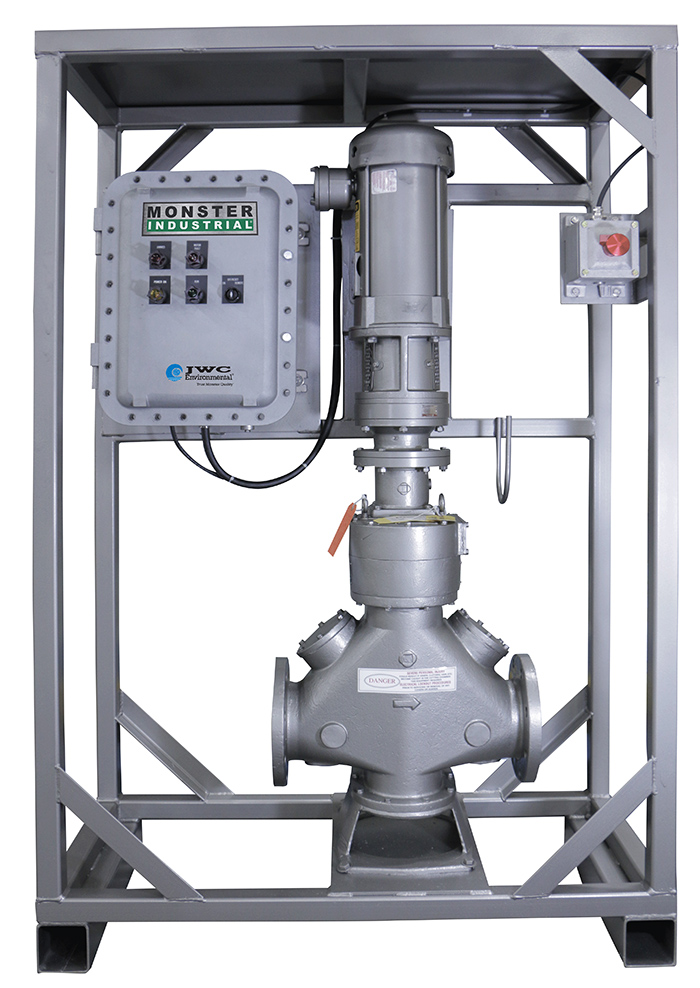 One of the common needs in the industry is the easy relocation of the grinders from site to site as drilling or tank cleanout operations move. To fulfill this requirement grinders are now being built into plug-and-play skid packages that can be moved by standard job site equipment like forklifts or cranes wherever they are needed. These skids have pre-wired programmable logic controller (PLC) control packages that only need power to run autonomously. Additionally, most oil and gas operations are working within hazardous areas with the possibility of explosive gasses. The grinders are outfitted with controls and motors certified for use in hazardous locations.

“Pumps are designed for different applications, so you are going to be more efficient at pumping clean water than you will be at pumping a slurry,” said Daniel Namie, who works with Superior Pumps in Sycamore, Illinois.

“When a pump impeller is cruising along at 3,600 rotations per minute (rpm) the velocities at the tip are extremely fast and can easily destroy all the metal on the impeller passing too large of a solid.

“So, in many applications we specify high-torque grinders, preferably dual-shaft, to grind up sludge or debris that could harm the pump.

“One of our customers had a large settling pond that was laced with petroleum, and needed to use polymers to bind with the petroleum for extraction.

“The polymer coagulated the petroleum, and those big solids could not be run through their pump without clogging it.

“So, we supplied a portable high-torque, dual-shafted grinder which protected his pump from potential damage. A simple solution that may have saved them thousands of dollars in pump damage.”

Kevin Bates is the director of global marketing & product management for JWC Environmental based in Santa Ana, California. Bates has more than 20 years of experience working with global industrial leaders to solve challenging technical problems spanning a wide range of markets including wastewater, construction and mining. He can be reached at kevinb@jwce.com.