My July 2016 article (“Are You a Pump Ninja?”, see it here) was in the format of a quiz. The quiz was very popular with readers, so I have been asked to follow up with a few more questions. Before I present a new series of questions, I have some comments regarding the July issue’s quiz.

For the record, I was not the one who picked the operative title word of “ninja.” Apologies to the editors, but I took a lot of ribbing from several of my fellow pump engineers. (Editor’s note: We are really glad to hear about the great response!)

Many of you wrote to me for explanations, comments and critique, and for that interest I sincerely thank you. The following discussion provides clarification on a few of the July quiz questions.

Question No. 2 referenced an example of doubling the pump speed to examine a fundamental knowledge of the affinity laws, but I did not add the caveat to essentially ignore the system pipe friction for this question. My thinking was that the next question on pipe size changes would make the point clear. A better way to state this would be a quote from William McNally: “The affinity laws predict pump performance changes, not changes in pump/system interactions. You’ll have to plot your ‘before and after’ pump curves with your system curve to estimate where your pump will operate.”

In the real world, doubling the speed on an existing and installed pump would produce some serious issues. The motor would need to be replaced by one capable of at least eight times the previous horsepower, which would require a bigger baseplate and potentially a whole new foundation. The electrical power lines would be too small to handle the new load, and the conduit would need to be upsized. In addition, the motor starter and controller would have to be replaced/upsized (see Institute of Electrical and Electronics Engineers [IEEE] and National Electrical Manufacturers Association [NEMA] codes).

The fluid friction increases with the square of the flow rate (Darcy-Weisbach/Colebrook formulas), so the required system head would increase dramatically. 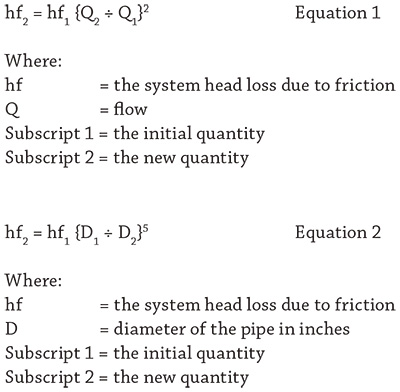 As an example using Equation 1, assume the initial flow was 200 gallons per minute (gpm) through a pipe system and the resultant friction loss is 18 feet. Increasing the flow to 350 gpm will result in a new friction value of 55 feet.

As an example using Equation 2, assume a system with 4-inch pipe can handle a flow rate of 500 gpm. The friction was calculated and checked empirically to be 20 feet of friction loss. If the system pipe size is reduced to 3-inch pipe, the new friction loss would be 84 feet.

Question No. 7 on a theoretical suction lift calculated at sea level while pumping water at a temperature of 70 F also elicited discussion. The question’s wording implied that the reader could simply ignore the real-world losses of friction, recirculation, shock losses and possible air ingress leakage. Yes, the theoretical lift would be 33.95 feet depending on barometric pressure (33.95 feet was the correct answer for the question), but in the real world, on an average installation, you will be lucky to get 25 feet of lift.

Regarding question No. 23, when starting a centrifugal pump, the discharge valve can be in the closed position. Some procedures require this, and with smaller pumps, it is not overly difficult to open the valve after the pump is started. With larger pumps, it may be difficult or impossible to open the valve because of the high differential pressure across the valve.

If there are pumps in parallel and/or there is pressure from other sources on one side of the isolation valve, the differential pressure has to be reduced or equalized to facilitate opening the valve. Some designers incorporate a small bypass valve to initially balance the pressure so the main valve can be opened easily. The correct answer was “d.” It depends on the specific speed, the system design and the operating procedures.

No matter how you start the pump, you must minimize the time that the pump operates at zero or low flow.

More Questions to Test Your Knowledge

Take this quiz and write down your answers. Then find out if you are a true Pump Ninja by referencing the answer key here.

Select the answer that is most correct.

2. When selecting the proper pump for a new installation, imagine that the suction pressure on your new proposed single-stage pump is more than 250 pounds per square inch gauge (psig). You do not need to waste precious time and effort to calculate the net positive suction head available (NPSHA) because the pressure is so high.
A) True
B) False

3. You are going to install a new self-priming pump where the maximum suction lift at the worst conditions would be 16 feet. You do not need to calculate the NPSHA because the fluid exhibits Newtonion properties and is at 88 F.
A) True
B) False

4. You are going to install a new self-priming pump where the suction lift at the worst conditions would be 16 feet. You do not need to calculate submergence because the suction pipe size is 6 inches and the flow is only 900 gpm.
A) True
B) False

5. You were informed by a trusted co-worker that all new industrial pumps come from the factory ready to operate. Which of the following pre-startup/installation requirements can you ignore?
A) Adding oil to the bearing housing
B) Driver to pump alignment
C) Mechanical seal settings
D) Impeller to casing clearances (assume an American National Standards Institute [ANSI] pump)
E) Reading the instruction book
F) None of the above
G) Both A and C

8. The pump industry typically ignores velocity head (HV) when calculating the NPSHA for a given system.
A) True. Typically the value is very small if the system is designed properly.
B) True. If we were to incorporate the factor into the measurement equation, the value would be positive.
C) If calculating NPSHA in lieu of measuring based on the static conditions, you ignore HV but include the friction (entrance) losses.
D) If measuring NPSHA with gauges, then you correct for and add HV.
E) All the above are false.
F) A, B, C and D are correct.

9. The limit for a centrifugal pump impeller tip speed on slurry applications ...
A) is not important, and no limits are incurred as long as the head per stage is less than 100 feet.
B) is 80 to 85 feet per second with elastomer-coated impellers.
C) is 110 to 115 feet per second for a medium slurry.
D) is 120 to 130 feet per second for “dirty water.”
E) only depends on the chrome content of the white iron.
F) B, C, and D are correct.

10. Many pump manufacturers will/must derate the normal shaft horsepower and torque limits under what conditions?
A) The driver is an internal combustion engine, which produces intermittent torque.
B) The pump is driven by a pulley and sheave system without a jackshaft.
C) If the shaft is sleeved versus solid.
D) All of the above.
E) None of the above.

11. For a given size piping system, adding a second identical pump in parallel will …
A) double the flow.
B) double the pressure (head).
C) increase the flow rate to a point determined by the system curve.
D) none of the above.

12. For a given size piping system, adding a second identical pump in series will …
A) double the head (pressure).
B) double the flow.
C) increase the discharge pressure (head) to a point determined by the system curve.
D) none of the above.

14. On pumps with metal wear rings (renewable), should there be a difference in material hardness of the two rings? (Assume the rotating and stationary rings with the hardness measured on the Brinell scale.)
Finish the following sentence: The difference in hardness …
A) is not a relevant factor.
B) should be at least a few points on the hardness scale to be acceptable.
C) should be a difference of at least 50 Brinell.
D) is less important if the Brinell hardness of the rings is greater than 430.
E) none of the above.
F) can be explained by C and D.

Write down your answers and find out if you are a true Pump Ninja by referencing the answer key here.