The Effects of Pump Component Wear

To further complicate matters, pump component wear invalidates most pump-performance curves. In highly variable conditions, wear cannot be accurately modeled or predicted. For processes that require tight and predictable performance over time, the solution is pumps that have tight performance ratios to begin with and are either immune to wear or can compensate for wear. Pumps can also be repaired to like-new condition. In doing this, there still remains the risk that the pump's performance will degrade before the anticipated rebuild point and cause production issues. Repair or replacement to regain proper pump performance can result in high costs for rotary PD pumps. In other words, the pump works mechanically just fine, but needs to be repaired to regain performance, which can be costly.

Loose pump performance also has associated side effects. These include an increased amount of shear imparted on the fluid, greater power requirements (and reduced efficiencies) of the pump and heat generation.

This is not to be confused with tight and loose. In fact, in many cases a pump with a tight performance band gives it the ability to handle a wide flow performance range. The width of the pump's performance band describes the range of speeds in which the pump can produce acceptable flow for the application. This is also sometimes referred to as the effective turn-down ratio of the pump, borrowed from terminology used in conjunction with motors or variable speed drives.

In Figure 8, notice the point at which the green or yellow pump curves are at greatest slip point and cross the zero/no flow (x axis line). These are points (A) and (B), respectively. These are points in which the green and yellow bands, representing respective pumps, begin to produce flow under the greatest slip condition possible for the process. The pump that starts to produce flow at point (A) will use the total range of pump speed more effectively (revolutions per minute) than the pump starting at point (B). 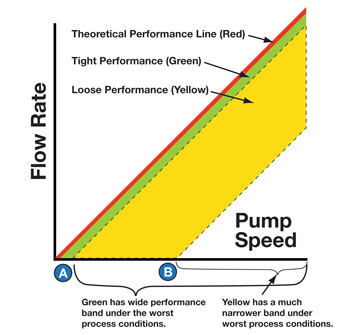 For an actual illustration of performance band width, refer back to Figure 6 (see "Pump Performance Bands (Part One" on www.pump-zone.com). Notice that a pump, in this case a typical lobe pump with a 0.153 gallon/revolution theoretical displacement, effectively has a narrow performance envelope. That is because under an arbitrary worst condition-in this case pumping 1 cps (water-like viscosity) fluid against 75 psig-the pump only begins to produce flow at 185 rpm. This means that speeds between 50 rpm to 185 rpm, which are considered good speeds for ensuring the long life of rotary PD pumps, are not available to the pumping process. The performance band is therefore narrow as it ranges from 185 rpm (instead of 0 rpm) to the maximum mechanical speed capability of the pump, or some other process limitation like NPSHR versus NPSHA, or the abrasiveness of product.

In comparison, refer back to Figure 7 (also on www.pump-zone.com), which shows the actual performance graph of a pump with a wide performance envelope. Notice that under the same conditions as Figure 6-pumping 1 cps product against 75 psig-flow begins to be produced at 15 rpm (instead of 185 rpm). In this case, on the low-RPM range, the pump in Figure 7 produces flow at a much wider range of RPMs than the pump in Figure 6.

In most cases, pump wear further increases slip, as is the case with lobe pumps (see Figure 6) when new, but not with wear. If wear occurs in this pump, the manufacturer-supplied performance curve no longer applies and actual performance is unknown, unless verified in the field. In Figure 6, the point at which the pump begins to produce flow under wear conditions could be even greater than 185 rpm and prompt repairs.

In sharp contrast, the pump illustrated in Figure 7 compensates for wear by maintaining as-new clearances. Therefore, slip does not change, and the pump performance remains tight with a wide range of flow capabilities.

Our example application that exploits these needs-the continuous in-line blending process-benefits from pumps that have a high turn-down ratio. This is because the recipe to produce the final product can be highly variable as far as the content percentage of each ingredient. In other words, the wider the flow rate range achieved by the pump, the wider the variation of recipes that can be produced with the system.

Good flow control from rotary PD pumps offers options for more advanced processes, like in-line blending, that can have far-reaching influence on a production facility's overall capital and operating costs. Respected pump manufacturers offer performance curves that can be evaluated to determine if the performance band is comfortably suitable for the application. If not, alternative pumping technologies should be studied and considered.

Most curves do not show the effects of wear on performance. Therefore, if wear is anticipated during the expected life span of the pumps and their parts, more subjective analysis is needed. Some curves do model wear, so look for those.

Table 1 compares different rotary PD pump technologies and how they compare regarding their performance bands and other criteria that may be important. Basically, the most important criteria for the process should be heavily weighted, but none of the criteria cause a disqualification.

In-line blending systems are already common in the beverage industry where the variation of ingredient viscosities can be controlled. Several suppliers specialize in these processes. Finding examples of more complex in-line blending processes that demand pumps with tight and wide performance bands is more elusive since they have been developed under proprietary restrictions and confidentiality.

This article builds on the principles presented in the Hydraulic Institute's "PD Pump Fundamentals, Design and Applications (Part One)" (Pumps & Systems, February 2009, available on www.pump-zone.com).

Wallace Wittkoff is the global hygienic director for Pump Solutions Group (PSGTM), Redlands, CA. He can be reached at 502-905-9169. PSG  is comprised of six pump companies-Wilden