Q. What sealing issues should a pump user be aware of when dealing with viscous fluids?

A. Sealing issues related to viscous liquids are complex. Mechanical seals or sealing devices must be capable of sealing a pump against a range of anticipated viscous conditions, including transient or upset conditions. Mechanical seal components may not perform as anticipated or could be exposed to loads higher than water. Connected with mechanical seals are seal flushing arrangements and associated piping.

In many cases, auxiliary systems include secondary components, such as orifices and filters, which may plug or cease to function correctly when handling viscous liquids.

The piping is normally external to the pump case and may require heat tracing or other considerations to ensure proper seal flushing. Seal manufacturers should always be consulted for detailed information and for proper selection purposes.

To learn more about the connection between viscous liquids and rotodynamic pumps, refer to Mechanical Seals for Pumps – A Cost-Saving Guide to Proper Selection, Installation & Operation, as well as ANSI/HI 9.6.7 Rotodynamic Pumps – Guideline for Effects of Liquid Viscosity on Performance. 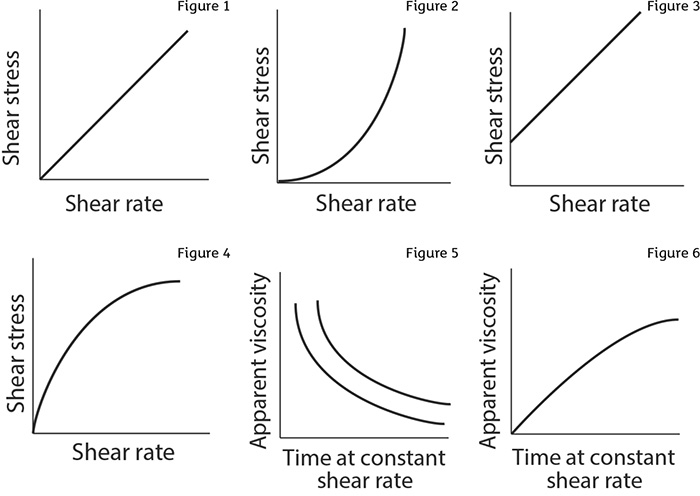 Q. What is the difference between a Newtonian and a non-Newtonian fluid, and how might a rotary pump’s performance be impacted by different fluid types?

A. The impact of fluid type on a rotary pump is generally viscous related. The viscosity of a fluid is its tendency to resist an internal shearing force.

The viscosity of the fluid being pumped affects the net positive inlet pressure required (NPIPR) and will impact the pump flow slip.

A fluid is Newtonian when the ratio of shear stress to shear rate is constant for all shear rates, is independent of time, and when zero shear rate exists only at zero shear stress (see Figure 1). Most mineral oils at temperatures above the cloud point (the temperature at which the oil begins to appear cloudy), solvents and water approximate this condition and are considered Newtonian fluids. The viscosity of these fluids is independent of the rate of shear.

A non-Newtonian fluid will change viscosity to match alterations in the rate of shear being applied to the fluid and/or the length of time at shear.

Several types of non-Newtonian fluids are defined in Figures 2 through 6. When the ratio of shear stress to shear rate increases as shear rate increases, reversibly and independent of time, a fluid is said to be dilatant (see Figure 2). Highly concentrated pigment-vehicle suspensions—such as paints, printing inks and some starches—are dilatant fluids.

The apparent viscosity of these fluids increases as the rate of shear increases. Some dilatant fluids solidify at high rates of shear.

When the ratio of shear stress to shear rate is constant for shear rates above zero, it is independent of time. When shear occurs only for shear stress above a fixed minimum greater than zero, a fluid is termed plastic. A plastic fluid, such as putty or molding clay, is characterized by a yield point, which means that a definite minimum stress or force must be applied to the fluid before any flow can take place.

Their apparent viscosity decreases with increasing shear rates, but tends to stabilize at high rates of shear.

A fluid is thixotropic when the ratio of shear stress to shear rate decreases and is time-dependent in that the ratio increases back to its “rest” value gradually with lapse of time at zero shear rate and stress, and decreases to a limit value gradually with lapse of time at a constant shear rate. Most greases, drilling muds, gels and quicksands are thixotropic fluids when the apparent viscosity of these materials decreases for an increasing rate of shear and for an increasing length of time at shear.

When the ratio of shear stress to shear rate is constant for all shear rates at any given instant of time, but increases with time, a fluid is rheopectic.

Some greases are intentionally manufactured to have partial rheopectic properties that facilitate pumping in a stable condition; however, upon shearing in a bearing, the grease builds up to a higher apparent viscosity.

Additional information about fluids and the effect of viscosity on pump and system performance may be found in ANSI/HI 3.1-3.5 Rotary Pumps for Nomenclature, Definitions, Application, and Operation.